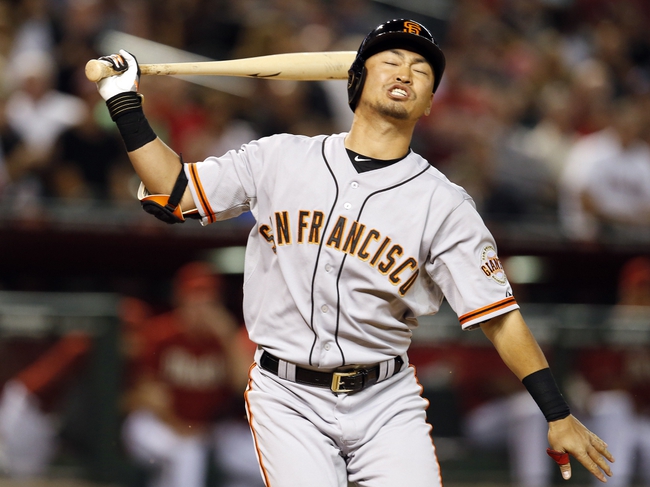 At the Giants’ postmortem press conference, Larry Baer, Bobby Evans and Bruce Bochy answered questions for 24 minutes. Then the two executives stuck around and talked to reporters for several minutes after the cameras were turned off. Since Brian Sabean was under the weather and didn’t attend the session, there weren’t any blunt references to a player needing to lose weight or not being in the team’s plans.

The Giants were very noncommittal, but some interesting notes came about in the later Q&A sessions in regard to the luxury tax. But while the Competitive Balance Tax is a budgetary detail worth following, it’s a lot more fun to think about what they might do with the roster to get back into the postseason in 2016. While the Giants painted a rosy picture of what the team could do when healthy, and the contributions from the young players, there are several questions they’ll need to answer this offseason.

1. Will the Giants re-sign Mike Leake?

He seems likely to re-sign, given the positive things he said about his experience with the team and the Giants’ decision to trade a fairly decent pitching prospect to the Reds in 22-year-old Keury Mella. But it’s not a lock that Leake will be back on a long-term deal.

“I’m not ready to pin down any one guy at this point. But I think we’ll be open-minded to the pace picking up if we decide that’s the direction we’ll go,” Evans said.

“I’ve spoken with Mike and he’s aware that there’s mutual interest, but the timing may not be as quick as we’d both like.”

Leake could look to start a bidding war between two NL West clubs. The D-Backs are probably interested — Leake both went to Arizona St. and lives in Phoenix. The Giants have the better ballpark for pitchers and a better climate as far as winning is concerned, but money usually has the final say.

2. They need to fill two holes in their rotation (and that’s assuming Matt Cain is healthy and effective). How might they do this?

As I wrote on Monday, the Giants go into this offseason looking to avoid paying the luxury tax for a second straight year. That gives them somewhere around $50 million to spend in 2016, and a guy like David Price or Zack Greinke could take up around 60% of that figure.

Leake’s price is kind of up in the air at this point, but he’ll command eight figures per year since he’s 28 and durable (although hamstring and elbow pain hampered his time with the Giants).

As for the other pitchers they could get on a deal that doesn’t push them into the tax?

I thought Mark Buehrle would’ve been close to a lock, since he’s a lefty who works quickly, and he’d be perfect for one of those two-year deals the Giants love to give to old guys … but he’s retiring.

As for free agents, the Giants could look at Wei-Yin Chen, Bartolo Colon (on a one-year deal), Marco Estrada, Doug Fister, Yovani Gallardo, Hisashi Iwakuma, Scott Kazmir, Ian Kennedy, John Lackey (eww, but he’ll be 37 and another two-year option who’s pitching effectively), and Jeff Samardzija. A lot of that will have to do with which players are tendered qualifying offers.

As for the international group, there are a few Cuban starters out there, and Evans hesitantly gave mention to Japanese starter Kenta Maeda probably being available. However, the GM noted that there might be “strings attached” to the pitcher who many thought might be posted last year but wasn’t.

3. Will they pick up Nori Aoki’s option?

Evans said it’d be a “close call,” so this probably depends on whatever options become available or how expensive the rotation becomes. Aoki’s option is $5.5 million, which seems pretty reasonable for the team’s best leadoff option (however, Evans mentioned how Blanco had his best offensive season in 2015 when asked about Aoki).

The Giants are confident that Aoki will go into next year fully healthy, so the problem is probably defensive — Aoki can only play left field and he’s a pretty terrible left fielder.

4. How about Marlon Byrd?

Only 50 players hit as many home runs (23) as Byrd last season, so he probably won’t want to settle for fourth-outfielder playing time (and money) from the Giants. As they did with just about everyone and everything, the Giants left open the possibility that he’d be back. But my guess is that would only occur if they thought they could get him at a price lower than Aoki’s in 2016.

Evans: “We’re going to have to probably spend our first time and attention on our pitching, and then we’ll address our offense a little later. But we’re aware of how much Byrd helped us, as well as De Aza and other guys.”

5. What’s up with Angel Pagan?

“The knees were a bear to him this year,” said Evans, who said Pagan was set to undergo a minor “cleanup” procedure on his right knee yesterday. “His intentions are to come back strong.”

When I asked Evans if there was any chance he’d move to a corner outfield spot next year after playing so poorly throughout the year in center, he brushed off that idea.

“Pagan’s a center fielder,” said Evans. “I just don’t see that move happening. If for some reason that changes, we’ll react to that. But we’re anticipating he’ll be healthy next year.”

Well, many are wondering if the Giants are looking to trade Pagan, which would probably please several members of the organization quite a bit (for example, Bochy has had to answer more than his fair share of questions relating to Pagan’s health over the past few years). Andrew Baggarly brought up the idea of sending Pagan and Beede to the Braves for right-handed starter Julio Teheran.

7. Will they sign Brandon Crawford to a multiyear contract extension?

There’s no doubt they’ll tender a contract to Crawford, who goes into his second year of arbitration after hitting a career-high 21 home runs. He seems like a player the Giants like to reward — he came up through the system, leads by example, works extremely hard, performs under pressure. Evans said the team talked to Crawford’s representatives about a long-term deal before last season, but obviously nothing came to fruition. The Giants love cost-certainty, but Crawford has another year of arbitration after this one, so the Giants might find it easier to fit under the 2016 budget by waiting one more year.

Evans said the team is “open-minded,” but that was his response to most of the questions he faced. Vogelsong seems to think the writing is on the wall based on how infrequently he was used (just twice after Sept. 7). It looked like Vogelsong was going to sign with the Astros until things fell through at the last minute and the Giants swooped in — it’s hard to envision a scenario like that occurring again this winter, but anything is possible.

9. Will they tender a contract to Yusmeiro Petit?

“We haven’t gotten as far as to make those decisions (on arbitration-eligible players), but Petit’s been a very valuable part of our bullpen,” Evans said. “So it’ll be a hard choice to make if we decide to do anything different than tender, but again, we haven’t made those decisions yet.”

Like Vogelsong, Petit was a forgotten man late in the season. After pitching 11 times in August, he wasn’t used at any point in the first 18 days of September. He finished the year with four appearances in the season’s final 16 days.

10. What’s the plan for Buster Posey?

“(The plan is to) keep Buster catching,” said Bochy.

“I know it looked like we turned him into a first baseman the last three weeks, but he’ll be our catcher next year with the occasional play at first base. We’d like to get back to how we used him the last couple years, I think that worked out well. We just happened to lose Belt and we needed a first baseman.”