So, uh … what the hell happened in the video above? Wil Myers didn’t do anything.

“I just wanted to be mad for a minute,” Madison Bumgarner told reporters.

Bumgarner went on to pitch a complete game Tuesday night, allowing just one run (a Matt Kemp moonshot in the ninth inning) and lowering his ERA to 2.45. He even seemed to smooth things over with Myers a little later in the game after reaching first base.

I don’t agree with the whole Steph got mad and sunk OKC angle. Getting mad got him wide open catch and shoots?

I don’t know Nate Duncan all that well, but I know he’s one of the brighter basketball minds out there. And I see his point, even if he’s contradicting what I thought took place last night. It’s impossible to quantify anger, and what he said was true — the Warriors ran high screens that got Curry open a number of times in the third quarter, thanks in large part to poor defensive communication by Oklahoma City players like Serge Ibaka and Steven Adams, during a sequence that just happened to occur after Curry looked upset about something. (Many thought he wanted a foul call, but he maintained after the game that he was upset about his swollen elbow getting bonked.)

Bumgarner and Curry are two completely different people who excel at completely different sports (as if this needed any clarification). Both are champions, but only one has admitted publicly that he feeds off of his own anger to the point that he manufactures it. Bumgarner believes a little shot of whatever makes him go into red-ass mode helps him focus on the task at hand.

From my experience watching Curry, that has been the case on multiple occasions. It just manifests differently, in that he’s not the one looking for trouble. But when trouble finds him, it usually leads to more problems for the opponent than Curry himself.

Curry sure seemed upset after one bad game and two consecutive losses during the 2015 NBA Finals, when Matthew Dellavedova supposedly became the league’s first “Curry stopper.” Here’s how he looked in Game 5 of that series, on his way to scoring 37 points, after crossing Dellavedova out of his Nikes. 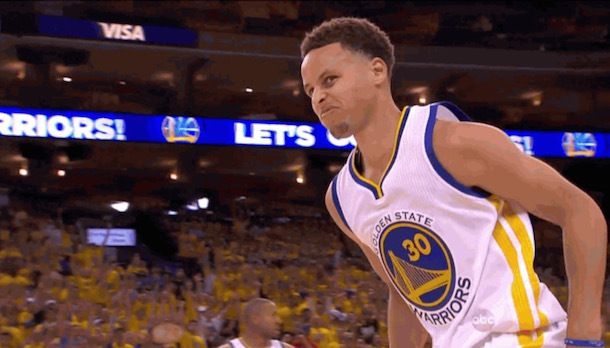 Was that expression after he hit a three over Dellavedova a sign of vengeance? What about when Curry stared at Ibaka last night? Does anger actually make a guy like Curry, who’s played excellently on multiple occasions while looking happy and carefree, perform even better?

Maybe, maybe not. But it sure looked that way in the Warriors’ first game of these playoffs. Patrick Beverley was trying to get Curry out of his comfort zone with a lot of clutching, grabbing and bumping. At one point, Curry had enough. The two players got into it briefly and a double technical was called.

Maybe this is a good time to check Marcus Thompson’s column after that game, seeing as he’s closer with Curry than anyone else in the media.

Curry was as mad as you’ll see him with 6:31 left in the first quarter. Beverley was hounding him as he dribbled. Curry lost his footing, got back up, and Beverley was still on him like a stench. Beverley was called for a foul, and their arms got tangled. Both players reacted, and it turned into a mini skirmish, one that made Curry mad enough to push Beverley off him.

It was as fiery as you will see Curry on the court. Except for that one time.

“Indiana three years ago,” Thompson said about the maddest he’s seen Curry. In February 2013, David Lee got into it with Pacers big man Roy Hibbert. Curry got in the middle and ended up going after a 7-footer.

You know what happened after that? Curry dropped 54 in Madison Square Garden.

That’s the deal with Curry. Has been since college. Treat him like he’s a weakling and you tap into the alter ego he created as the baby faced baller that didn’t garner respect. He becomes bent on demanding respect.

Curry went on to score 20 points in about 15 minutes after the run-in with Beverley, and was visibly on another offensive level — much like last night in the middle of the third quarter — from that moment on.

Beverley really sent Curry into a tailspin … he only went 4-for-6 and scored 13 points in the next 6:31 after the double-technical.

I understand the movement to get psychoanalysis out of sports coverage, to rid ourselves of words like “clutch” or “momentum.” This makes sense, because who are we? We’re just sportswriters, talking heads or fans. Until virtual reality allows us to tap into the thoughts and feelings of athletes and coaches in real time, we don’t know a fraction of what we think we do about what and how they think.

However, as Draymond Green (another player who seems to enjoy firing himself up, albeit in different ways than Bumgarner) kind of said during his infamous locker room rant a couple months ago in Oklahoma City at halftime: these are people, not robots. And while the image of someone in a movie or television show seeing red before destroying everyone/everything in sight is cliché, it appears we have enough evidence, both anecdotal and via testimony from teammates and the players themselves, that some of the most elite athletes in the world have the ability to turn negative energy into a positive.

Warriors rout Thunder with ball movement, 3rd quarter scoring barrage from Angry Curry
Draymond Green’s memory is insane and the chip on his shoulder is very large
To Top