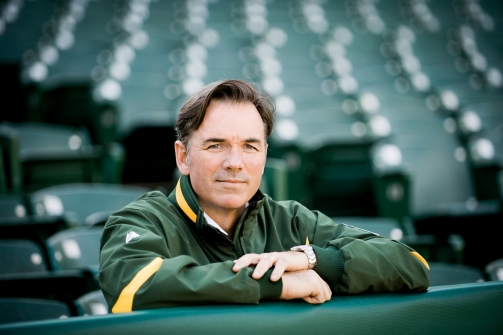 The blockbuster deal, obviously, was Yoenis Cespedes for Jon Lester and Jonny Gomes. That gives the A’s four frontline starters, which in turn allowed Beane to flip an unhappy (and unproductive, of late) Tommy Milone to the Minnesota Twins for Sam Fuld. Yes, the same Fuld the A’s designated for assignment back in April.

With Craig Gentry and Coco Crisp injured, and Cespedes refusing to play center field for whatever reason, Beane acquired the top starting pitcher on the market who was known without a shadow of a doubt to be available, then figured out the center field problem for good measure.

The fact that he got an asset that could help the A’s now for Milone is pretty impressive, since the lefty requested a trade after the Jeff Samardzija deal and has allowed 14 earned runs in his last three starts in Sacramento. Plus, several talent evaluators (including Keith Law) said Milone doesn’t possess the stuff to fetch a whole lot in a trade. But that’s Beane. Instead of waiting for Milone to pick things up and maybe deal him in the offseason, or give him another shot at making the big league rotation, he plugged one of the A’s few remaining roster holes.

Regardless of how the A’s do in the postseason (and I question how well their offense will function against elite pitching without Cespedes), these moves represent aggressive and logical strikes designed to create the strongest and most balanced team of Beane’s tenure. And that’s saying something.

There could be more. Since Beane and the A’s are never satisfied, don’t be shocked if they make another deal in the next few hours for a second baseman, even though Eric Sogard’s recent numbers aren’t too bad. Then again, what the hell do I know? I was on YSTL last night, and one of the questions was who was more likely to remain with the A’s in 2016, Cespedes or Jeff Samardzija. I went with Cespedes. We were also asked who was more likely to make a deadline deal, A’s or Giants. I went with the Giants, because they’re more desperate. Beane is already up 2-0 on “Sabey-Sabes” since yesterday.