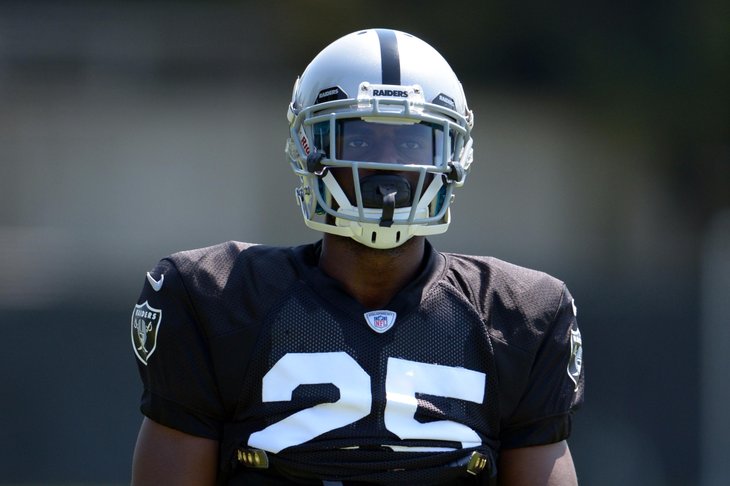 The Oakland Raiders did not have a first round pick in the NFL Draft in 2011 or 2012. When they finally found themselves back in the first round in 2013, they traded back and selected cornerback D.J. Hayden with the 12th overall pick. Hayden came into the league with seemingly more risk than your average first rounder, as a freak heart injury suffered during a practice collision almost killed him.

Hayden’s heart has been fine since becoming a Raider, but he’s had a difficult time staying on the field due to a variety of more common football ailments. He was placed on IR last November with a sports hernia, and spent the first six weeks of this year on IR with the designation to return due to a foot ailment. With Week 6 in the books, the Raiders were able to bring Hayden back to practice after he spend the beginning of the season on injured reserve with the designation to return.

There is still no word on whether or not Hayden will play this Sunday against the Arizona Cardinals, but he has already started to do some good things — he made an interception in practice on Wednesday. If he is ready to go this weekend, the Raiders are hopeful that he will finally show everyone why they drafted him in the first place. The team has struggled massively on defense, and while much of the focus has been on the terrible run defense (31st in rushing yards per game), the secondary is still one of the worst in the league (only three teams have allowed a higher QB rating than Oakland’s 107.6).

But even if Hayden is good to go, one has to wonder if he can actually make a difference.

In his rookie season, Hayden did his best Dr. Jekyll and Mr. Hyde impersonation, alternating good and bad performances. His highlight was the game-winning interception in the end zone against the San Diego Chargers … his lowlight was being used and abused by Riley Cooper and Nick Foles of the Eagles. During his rookie year, he was targeted 40 times and gave up 26 catches for 376 yards and three touchdowns with only the one interception in the Chargers game and no pass deflections. Quarterbacks had a 110.0 rating when throwing Hayden’s way last year, according to Pro Football Focus.

Those stats don’t point to Hayden making an immediate (beneficial) impact. And it’s not even like one can point to this being his second year, with the hope that he’s improved. As noted above, he missed almost all of this offseason with injury issues and just started practicing again. So, can Hayden help the Raiders? Possibly, if he finally lives up to his draft status. But the more likely result is that he will be eased back into playing time and will not have much of an impact at all this season. The Raiders are happy to have him back, but will need to continue being patient if they still have hopes of Hayden turning into a star. Unless a miracle occurs, that’s not going to happen this year.