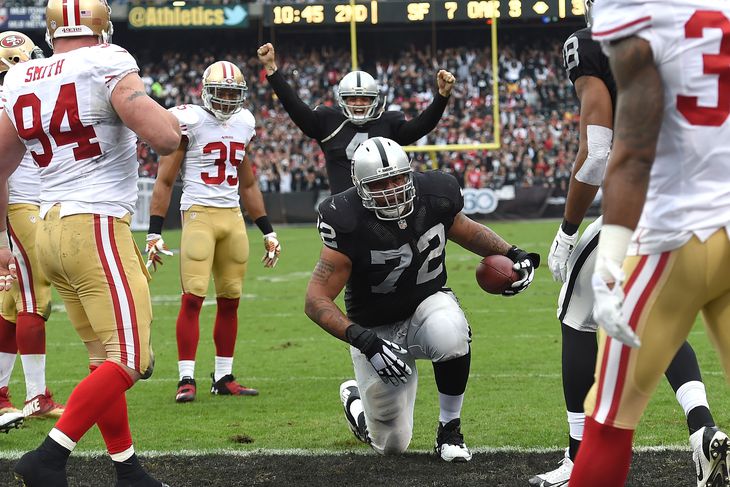 The first touchdown for the Oakland Raiders against the San Francisco 49ers was a less than conventional one. Third and goal from the three yard line and Raiders quarterback Derek Carr completes a three yard touchdown pass to his starting left tackle, Donald Penn. I watched in childish glee as the 340 pound tackle fell backwards into the endzone when someone nearby remarked that it was probably his one and only catch in his NFL career. But looking back, it turns out that Donald Penn is an absolute touchdown machine.

Ok, that may be a bit of an exaggeration, but the tackle who is known for quality pass protection skills has had some rather impressive success as a receiver as well. In his career, Penn has been targeted on four passes. He has caught all four balls for 22 yards and three touchdowns. And as it turns out, two of those touchdowns came against the 49ers. Aside from his grab on Sunday, Penn also scored a touchdown against the Niners back in 2010 when he was a member of the Tampa Bay Buccaneers. The Bucs went on to win that game 21-0 meaning Penn’s teams are undefeated when he catches a pass against the 49ers (talk about a useless stat).