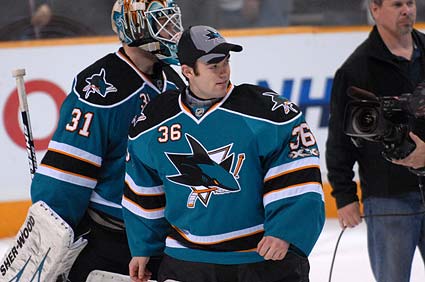 SAP CENTER–The last time I saw goaltender J.P. Anderson was almost a year ago, and he was wearing a San Francisco Bulls jersey.

The Sharks prospect wasn’t very comfortable on the Cow Palace ice, notching a 1-7-2 record in 14 games played before the team was dissolved early 2014, sending him up to the Worcester Sharks and then to play seven games for the Ontario Reign of the ECHL.

But Anderson was a completely transformed player between the pipes in Wednesday’s prospect scrimmage at the Tank, turning away 10 shots in the first half of play in what lead to a 2-1 victory for Team White over the opposing Team Teal.

“Felt like I played well down the stretch last year,” Anderson commented post-scrimmage. “I think that gave me some confidence going into the summer.”

Following his departure from San Francisco, the Toronto native got plenty of work in with Worcester’s goalie coach, Corey Schwab. He continued to grind with the coaches down in Ontario, posting a .917 SV% and 2.54 GAA in seven games with the Reign.

“I just got back to fundamentals,” he explained. “Was able to kind take that into the latter part of the season.”

That isn’t to say that making multiple appearances to Sharks developmental camp hasn’t helped as well. This is Anderson’s third development camp with the Sharks organization, and he’s feeling like less of a newbie.

“The first time you come in here, you’re a little… ‘Deer in the headlights,’ a little bit, don’t know what to expect. But this is my third time now at development camp, been out here a few times, comfortable with a lot of the guys. I try to be a leader, try to help out the young guys.”

Anderson certainly had leadership stuff both in and outside the crease during Wednesday’s scrimmage. His ability to play the puck looked very well suited to the NHL ice.

“We definitely focus on it a lot in this camp,” Anderson explained after being complimented. “It’s a big detail we try and focus on. If I can get out there and help out, that’s what I’ll try and do.”