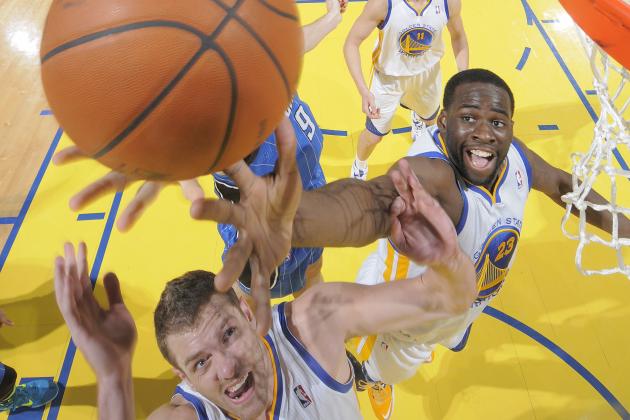 The Warriors don’t play an actual game until Friday, but there are several roster questions to keep us interested until they face the Spurs at Oracle.

Green has loved playing with the Warriors and winning, and naturally Golden State is determined to find a way to retain him. Still, the Warriors’ salary structure almost dictates that Green has to go onto the market and get an offer sheet for them to match in July.

If the offer is too rich to match, the chance for Green to return to his beloved home state – where he grew up in Saginaw and played at Michigan State in East Lansing – has long intrigued him, sources said. Green still spends most of his time away from the NBA in Michigan.

Instead of just copying/pasting the entire segment of Woj’s story (which is mostly about Goran Dragic), here’s a summary of his bit about the Warriors:

It’s interesting that Andre Iguodala’s name didn’t come up in Woj’s story, but not incredibly surprising. Iguodala is set to make almost $23 million total over the next two seasons, which is pretty generous for a reserve. However, Iguodala is one of the team’s best defenders and facilitators, plays more minutes than Lee, and is a key cog in the team’s crunch-time lineup.

The Warriors simply can’t afford to part ways with Draymond Green, the only player on the roster who provides defense, rebounding and FURIOUS ANGER (as Jules from Pulp Fiction might describe it) when Andrew Bogut isn’t on the floor. Woj’s theory makes sense in that (1) the Pistons are surely interested, (2) there’s probably some interest on Green’s part in a return to his home state, and (3) the Warriors will need to dump Lee’s salary. I’d be shocked if they parted ways with Lee before the season ended, due to the reasons mentioned above.

Should/will they add a veteran?

The Warriors are deep, but there’s been a lot of talk about bringing in another player to complement what they already have. Two of those players can be removed from this list.

Amar’e Stoudemire is taking his talents to Dallas. http://t.co/dWD8N36OI8 pic.twitter.com/Z8G4llULDK

Fine, we didn’t want him anyway!

I’m not sure if there will ever be another time or not for me and basketball but what I do know at this moment is the time isn’t right for me to play now. But just know I gave everything I had these last 7 weeks and I greatly appreciate each and every one of you guys for the positive words of encouragement thru my process……

O’Neal reportedly was interested in playing with the Mavericks (he lives near Dallas), so perhaps the Stoudemire news influenced his decision to not “play now.” Either way, the Warriors’ interest in O’Neal was probably either lukewarm or nonexistent, seeing as they decided to roll into this season with Festus Ezeli (who has a difficult time staying healthy) and Ognjen Kuzmic (who seems to spend more time with the Santa Cruz Warriors than the Golden State Warriors).

There are two other options people have mentioned.

He has a no-trade clause, and unlike Stoudemire he hasn’t been handed the buyout escape route from his terrible New York team. He’d definitely make things interesting in the Warriors locker room, but is his skill set (some defense and rebounding, an elbow jumper here and there) necessary? While he’d fit in from a keeping-the-other-team-from-scoring standpoint, he’s not a viable replacement for Andrew Bogut. Of course, that kind of player isn’t available for what it might take to land Garnett. Case in point: Cleveland gave up two first-rounders for Timofey Mozgov and a second-rounder.

Believe it or not, the Warriors could use another perimeter shooter. Yes, even with Stephen Curry and Klay Thompson on the team. Harrison Barnes has shot extremely well from the corners, but he’s not incredibly reliable anywhere else. Green shot 36% from three-point range through November; since then he has only made 30.7%. Iguodala, Leandro Barbosa and Justin Holiday are all OK from distance, but none of them can shoot it like Allen.

Allen wouldn’t help much defensively, but he’d be worth adding just to ensure that Iguodala (who fears getting fouled) doesn’t end up taking another shot at the end of a close game. Iguodala throwing an inbound pass with Curry, Thompson and Allen on the floor would lead to an open shot for someone, one would assume.

However, I get the feeling that Allen will probably end up with the Cavs if he signs with any team at all. Just a hunch, based on Allen’s history with LeBron James.

Prediction: The Warriors stand pat with their current roster, which was good enough to go 42-9 before the break.