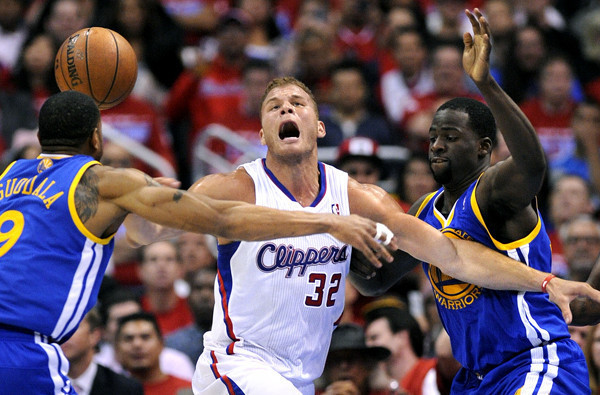 The Golden State Warriors had their way with Dallas Mavericks last night, winning 104-89. The final score wasn’t surprising, given how the games between these two clubs have gone throughout this season. What was rather disconcerting was the general listlessness we saw from the Mavs, a playoff team that knows late April will be grim.

When Dirk Nowitzki missed a jumper on one end, then picked up a technical foul after fouling Stephen Curry on the other in the fourth quarter, you just felt bad. Here’s Nowitzki, the seventh-leading scorer of all time, a guy who took less than max money to help Mark Cuban build another championship team, and he’s stuck with a starting lineup that included Richard Jefferson. There was Rajon Rondo, looking for his own shot (never a good thing), apparently on some quest to prove he’s as good as Curry. At least Rondo looked better than Monta Ellis, who couldn’t hit a shot. They’re counting on a decrepit Amar’e Stoudemire to provide offense off the bench, and there’s more than enough JJ Barea to go around. Going into this game without Chandler Parsons was a tough task, but the Mavericks don’t look like they’re up for many challenges these days.

So that’s where we start looking at playoff matchups, because they absolutely matter. From a glance, the Western Conference is stacked. But the difference is enormous between the Mavericks and the Spurs, two teams separated by half a game in the standings. At 48-12, the Warriors have an excellent chance of finishing with the best record in the NBA, as the 49-12 Hawks have 14 remaining road games compared to nine at home. The Warriors, who ran their home record to 26-2 last night, have just 10 games left to play away from Oracle.

Homecourt advantage throughout would be extremely helpful, but the Warriors face the prospect of facing at least two of the four teams that would likely give them the most trouble … that is, if they are indeed good enough to escape the Western Conference gauntlet.

Since Golden State holds a 4.5-game lead over Memphis through 60 games (61 for the Grizzlies), it’s all about the eighth seed. So that’s where we’ll start on this edition of “Who to PLAY, Who to AVOID.”

The Thunder obliterated the Warriors in their last meeting at OKC, but Andrew Bogut and Andre Iguodala were ordered to watch that game in street clothes by Steve Kerr. Nevertheless, this is a dangerous team — despite the fact that they’re only a game ahead of New Orleans and 1.5 up on Phoenix. With Russell Westbrook showing alien tendencies on a nightly basis, they’ll make it to the playoffs.

I mean, just look at this:

You can “yeah it’s the Sixers” all you want. The Westbrook/Durant/Ibaka trio is frightening, and they have plenty of playoff experience. This is a No. 8 seed in name only.

The Warriors may have gained a psychological advantage with their decisive post-All-Star Break victory over San Antonio. However, the defending champs have won four in a row, Tony Parker (24 points and 7 assists last night against Denver) seems to be awakening from his season-long slumber, and they’re still the Spurs.

Maybe Rick Carlisle could do something with this roster if given a season or two to find some chemistry and continuity … but trading for a ridiculously overrated, completely past-his-prime Rondo, a player more suited for a different era (when point guards didn’t have to shoot to be effective) was a perfect example of subtraction by addition. The Mavs are 21-16 since his arrival.

Golden State took L.A. to seven games last year with no Andrew Bogut and buzzards circling Mark Jackson, but the Donald Sterling saga probably had something to do with that. Even with a suboptimal bench (the Clips just added Nate Robinson, if that tells you anything) the Clippers present a tough test for the Warriors. Blake Griffin might return for tomorrow’s game in Oakland, which should provide a lot of national TV entertainment since it’s rare that you see two good teams that can’t stand each other go head-to-head. Spanking the Clippers tomorrow would give the Warriors’ collective psyche (and ego) a nice boost, but anything can happen in a seven-game series against these guys.

The Warriors won all four games against the Rockets. Average score: Warriors 115, Rockets 100. Dwight or no Dwight, it doesn’t matter.

This wasn’t the worst matchup for the Warriors three days ago, and the loss of Wesley Matthews (Achilles tear) on March 5 severely hampers Portland’s chances of winning a playoff series. Damian Lillard and LaMarcus Aldridge are good enough to carry them through an opening matchup against a team like Houston or Dallas, but that’s about it.

They’ve been a little off since the break, going 5-3 with a 12-point loss in Sacramento, an 18-point defeat at home against the Clippers, and an 11-point loss at home to the Jazz. Regardless, the most important game left on Golden State’s schedule is Mar. 27 in Memphis. They also play each other in Oakland on April 13, but playoff seeding may already be locked in by that point as both squads only have one game left after that one.

Memphis and Golden State have only met once this season. The Grizz won by seven points at home in a game Bogut missed. But here’s why Memphis is the consensus “team the Warriors don’t want to face”: They have the league’s best all-around center, the closest thing today’s NBA has to a lefty Kevin McHale at power forward, one of the game’s better point guards, and a wicked wing defender

In a year where Draymond Green has proven so much (check out this good and VERY thorough breakdown of why he should win DPOY from Basketball Insiders), he has never passed the Zach Randolph test with flying colors. His big bro (in a sense) from Michigan State has punished Green on the block repeatedly in the last two seasons. Not that Green can’t succeed in this matchup, we just haven’t seen it yet.

1. Oklahoma City surges while Dallas sinks, putting the Mavericks at No. 8

2. The Clippers move up to the No. 3 spot, pitting Houston and Portland in the 4-5 matchup (the winner of which would face Golden State, as long the Warriors won their first round series)

1. Warriors face the Thunder in the first round

2. If Warriors emerge, they face the Clippers in the second round

3. Western Conference Finals: Warriors vs. Grizzlies (or San Antonio, and if the Spurs catch fire they’ll look just as threatening)