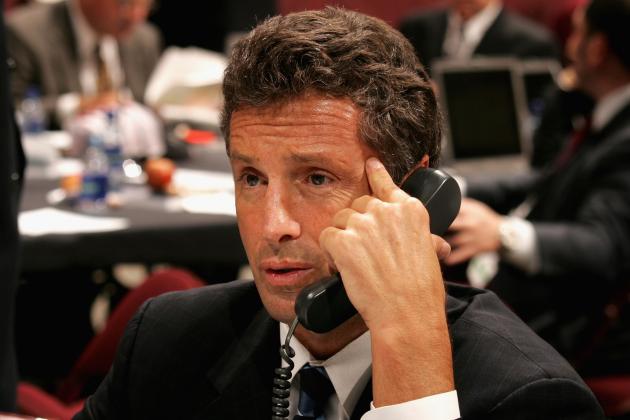 Sharks’ owner Hasso Plattner pulled back his cloak of mystery for a couple seconds on Thursday when the team released a letter he wrote to Sharks fans.

The lengthy adage hinted at two key things: Plattner is seemingly just as upset as everyone else that the team missed the playoffs, and that the Doug Wilson Rebuild Era will continue.

The following portion of Plattner’s message was probably as good an indicator as any that the refurbish-retool-revamp era isn’t over: “Once we committed ourselves to the rebuild we had to steer straight, even if there was some disappointment.” (Even Plattner, whose English doesn’t appear to be the most eloquent, is using Word Of The Season “disappointment.”)

The decision comes much to the dismay of many fans who’ve wanted Wilson gone since the start of the last offseason, and a social media meltdown hit almost immediately.

San Jose’s season only concluded two weeks ago. The head coach has departed and the GM isn’t going anywhere despite a rocky 12-month stint, and we haven’t even reached the full-blown off-season for the entire league yet.

What’s in store for the Sharks and their fans following Plattner’s letter?

— The “Fire Wilson” movement on Twitter probably isn’t going away, although it isn’t going to do anything productive. If Plattner has chosen to stick with the current team plan, a social media outburst probably won’t make him change his mind and scrap Wilson.

— As for the jobs where the Sharks didn’t retain personnel, there is a coaching vacancy that needs to be filled. While other teams in the league have already lined up to show their interest in Todd McLellan, the Sharks haven’t made an immediate push to find someone new to stand behind their own bench.

Sportsnet journalist Elliotte Friendman tweeted early Friday that San Jose has the green light to interview Randy Carlyle. However, with so many other names in the mix it is unlikely that the coaching search starts and ends with the former Toronto Maple Leafs HC.

In Wilson’s meeting with the media on Monday, he commented that there is no rush to fill the void. “I want to get the right person. There’s people that would like to coach here. We’ve got a lot of good players. We’re in a good position to go forward. There will be some coaches that will probably become available in the next little while. So I don’t want to rush the decision from a shortened pool.”

It could be that a lengthy interview process is due to finding someone who will fully buy in to the whole rebuild process. McLellan made comments during his exit presser on Monday that eluded to the idea that the direction the team’s revamp led to the decision to “part ways” with the Sharks. “This team is clearly in a rebuild,” he said. “I felt it was time (to move on.)”

Whoever gets tapped for the coaching position is going to have to embrace this rebuild culture. Everything from the dressing room’s fragile mindset after missing the playoffs to the culmination of the younger players being brought into the fold. While we’re on that note…

— A handful of the players brought up during the 2014-2015 season start their playoffs education with the Worcester Sharks in Round 1 of the AHL playoffs, starting on Friday against the Hershey Bears.

As far as the youth movement goes: The hope is that this run in Worcester will give players extra seasoning headed into the 2015-16 run. Hopefully the extra work, as opposed to the extra long summer, will account for more productive sophomore campaigns. Between having playoff experience and their first seasons up in San Jose under their belts, they will contribute more when the Sharks reconvene next season.

The AHL playoffs can also account for a good “team building” exercise, building up their chemistry both on and off the ice. With the current culture in San Jose’s locker room rumored to be in disarray, creating a solids team bonds over the AHL playoffs. It would certainly be nice to bring some good vibes into training camp this fall.

There is still the NHL Draft and the movement of the AHL team out West to get to. At the risk of stating the obvious, there is a lot of work to be done over the next couple months. Plattner acknowledged this at the end of his letter:

“Are we perfect? No, not all moves will play out as thought and the competition will do everything to keep us at bay. But we have a tremendous core, the older players are still fully committed, and some of the sophomores will enter their third year. With some luck in the draft this summer and a new team behind the bench we will fully attack again and show some good sport.”

The Sharks need more than luck to get through this summer better than they did the last one.

Todd McLellan on leaving Sharks: “This team is clearly in a rebuild.”
New Sharks Coach Peter DeBoer: “I want to give everyone a clear, clean slate.”
To Top
wpDiscuz