If you had only taken a quick glance at the Sharks game Thursday night — on the chance that you were glued to baseball and only occasionally checking hockey scores — you would have thought that the Islanders were completely outplaying them. But the gritty barn-burner between the two teams in their first meeting of the season was not a gimme for New York. Team Teal was tenacious albeit being outplayed by the tough Islanders team early on.

Granted, the Sharks were outshot 45-23 through three periods and regulation, and out-skated for the better part of the game. And in the end the Isles notched the 4-3 victory in the shootout to hand San Jose their first lost of the season. 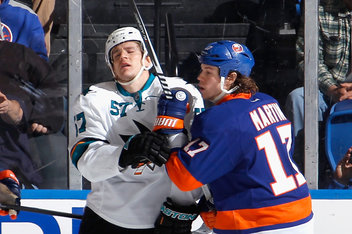 The lopsided shot clock gives you an idea of how clutch Alex Stalock was between the pipes. He made incredible saves throughout, particularly when he stopped a flurry at the tail end of the second stanza that gave the Sharks a sure opportunity to win.

Despite the Sharks jolt of energy in overtime play–the fastest and feistiest they’ve played in the early season–it wasn’t enough to stave off the speedy, rebuilt Isles team.

San Jose drew first blood in the second frame, following a scoreless premiere period when they were outshot 14-3. Brent Burns’ shot hit NY’s John Tavares in the skate. Joe Thornton grabbed possession of the puck as Tavares crumbled to the ice in pain and fed it back to Burns whose one-timer beat Jaroslav Halak.

Newly acquired Nick Leddy answered back for New York just a few minutes later with a shot through traffic that knotted the game up 1-1.

San Jose got the opportunity to break through when Mirco Mueller drew a penalty to put the Sharks on the power play–there were only penalties total in Thursday’s physical matchup. While on the man advantage, Patrick Marleau sniped the puck past Halak’s view to give the Sharks the lead back, 2-1.

The Isles tallied two goals early in the third period, the first a power play goal by Kyle Okposo to tie the game 2-2, and the second a wrister by Josh Bailey to give New York their first lead of the night at 8:38 in the third. But the Sharks knotted things back up in stellar fashion. Jason Demers fed the puck to Tomas Hertl, who eluded the defensive prowess of Leddy to fire a goal past Halak and make it 3-3 with less than 10 minutes in regulation.

San Jose’s East Coast road trip continues this weekend with a Saturday tilt against the Devils in New Jersey. Puck drop for that game is scheduled for 4 pm Pacific time.