All’s well in the land of Harbaugh. In fact, love is in the air.

“I love coach Harbaugh,” said Colin Kaepernick after the 49ers’ 22-17 win over the Chiefs. “I’d go to war with him any day of the week. He’s a competitor, he wants to win and he’s going to do anything to put this team in a position to win.”

Q: There’s been so much talk over the last week about your situation and all the outside noise. Has the team gathered, banded together with all that talk? How do you think the team has been responding to all the talk that’s out there?

Harbaugh: “The team doesn’t have to respond. The team has to do their job and play football. It’s my job to love them – those players, those coaches, everybody in our organization. It’s their job to love each other. They don’t need to respond in any other way than their job. The football team has done good. And the better you do, the more you do, then the more people try to trip you up. Whether you’re getting praised, whether you’re getting criticized or whether it’s silence, all three have their obstacles. All three have things that have to be addressed. But they also all three add, any of the three, can add to the competitiveness, add to the determination. And our football team is very determined and very competitive.”

“We got football players. That’s what we got. Guys who can stand in front of the mirror, look at themselves in the mirror and say, ‘I’m a football player’. That’s a heck of a feeling. If you’ve ever done that.”

“I feel awesome for Phil, he can stand in front of the mirror and say, ‘I’m Phil Dawson. I’m a football player.'”

“Of course, Frank, his running behind his pads. He can stand in front of a mirror and say, ‘Frank Gore, football player,’ and feel real good about it.”

“I thought he was outstanding. He was good, cool, in charge. He’s playing really good football. Alex Smith can stand in front of a mirror. He’s a football player.”

The “football player” angle drew some laughs from players after the game. Apparently Harbaugh doesn’t just trot this stuff out for reporters.

“It’s something that (Harbaugh) takes a lot of pride in. I think he lives, eats, drinks football. So that’s a big compliment. A football player is someone that’s tough, physical,” said Joe Staley, who described his “mirror” habits at home.

“‘I’m a football player!’ And then my wife says, ‘You’re also a daddy, so you better feed your baby.'”

Bruce Miller was still in full uniform when talking to reporters. He said it was because he did an interview with CSN Bay Area, but I had to ask if he was following Harbaugh’s advice.

“I was standing in the mirror for 30 minutes. ‘I’m a football player,’ joked Miller. “I feel like one, at least.”

But the problem has nothing to do with mirrors or football players, and there are enough players on this team who either don’t mind Harbaugh or would do pretty much anything for him. This is a front office vs. Harbaugh problem, which is his change in facial expression in the moments immediately after yelling, “Who can possibly have it better than us?” was interesting.

Harbaugh looks at Hyde, then he makes eye contact with Trent Baalke (h/t @JohnDylan48, and my wife even made a GIF that’s under these photos). Here’s the GIF we promised:

We’ve seen this face from Harbaugh several times before. 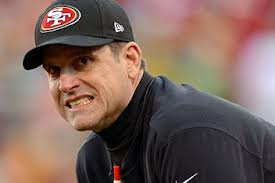 During the Alex Smith days: Maybe it’s nothing … and maybe the sight of Baalke in the locker room wasn’t a pleasant one for the 49ers head coach, who has the support of last week’s NFC Defensive Player of the Week.

“The media, they’re going to say what they want to say,” Antoine Bethea said yesterday. “It’s all about the guys in this locker room. We sit together, we’re family, and we’re going to stand behind our coach 110%.”