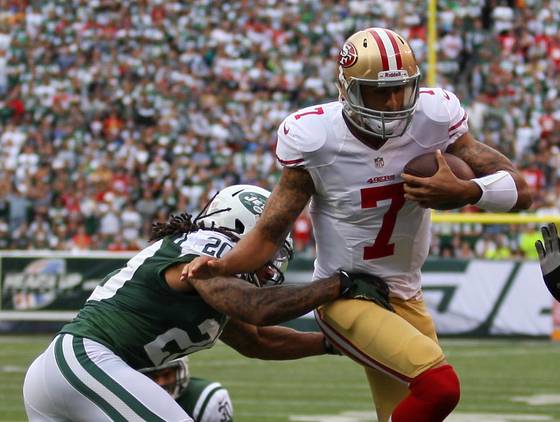 Colin Kaepernick wants to play for the Jets next season, according to a New York Daily News report from Manish Mehta. That part is interesting, and could lead to a nice opening for a potential trade. Except, based on what Mehta has heard, Kaepernick would probably prefer to play for a number of teams over the 49ers.

The Daily News has learned that embattled 49ers quarterback Colin Kaepernick wants out of San Francisco after a forgettable 2015 that included on-field struggles that resulted in a benching midway through the season and a coaching change after it. The Jets are his preferred destination, according to sources.

The article included details about Kaepernick’s discontent with his soon-to-be-former team (in all likelihood).

Kaepernick, three years removed from taking the 49ers to back-to-back NFC Championship Games – and one play away from consecutive Super Bowl trips, has become disillusioned with the franchise that selected him in the second round in 2011. His frayed relationship with the team during the past year has shown no signs of improvement.

Kaepernick, who had left shoulder surgery in November and right thumb and left knee surgeries last month, is rehabbing with his own trainers in Colorado rather than at the team facility, according to sources familiar with the situation.

No surprise there, since the team buried Kaepernick in 2015 with a terrible offensive line and coaching staff, along with rumors about his study habits and whispers to Fox announcers about his failures on the field. However, the 49ers now have a vested interest in appearing interested in him. The 49ers have been feeding Jason Cole plenty of “we think Kap can resurrect his career with Chip Kelly” material, but we should probably put that information in the same category as Jed York’s comments about fresh starts.

A sampling of Cole’s reports over the last several months:

The Kaepernick Equation: tear him down, put him back together, trade him.

Yet Mehta noted that if the Jets have interest in Kaepernick — and it sounds like they might — they would need to decide whether to part with something (the Jets only have six picks in this year’s draft) or wait for Kaepernick to be released. And Kaepernick, who knows more about the inner workings of the 49ers than Cole or anyone else outside the building, has no reason to play nice. He had two surgeries in early-January that could jeopardize his ability to pass a physical on April 1 (which would put the 49ers on the hook for his 2016 base salary), and he sure seemed to feel as though he was being treated unfairly before he got benched.

From his Oct. 28 press conference:

Q: “Last year, we all say what happened with former head coach Jim Harbaugh, just reports that seemed to undermine the situation and then he’s gone. Do you feel in any way that you’re being made a scapegoat by maybe someone in the organization for what’s happening this season?”

“I really hope not.” If he didn’t feel like he was being made a scapegoat, he probably would’ve said something like, “No, I don’t think that’s the case. This team is behind me 100%.”

If it’s widely known throughout the league that the Kelly hire didn’t change a thing and Kaepernick has no desire to play for the 49ers, why would another team give up anything of value for him? After a poor 2015 season, said team would have to take a massive leap of faith to pay Kaepernick over $14 million (including workout and roster bonuses) in 2016. In other words, despite recent comments from York and whatever “buzz” we’ve heard since Kelly replaced Jim Tomsula, the 49ers have very little leverage in trade talks. Unless there are multiple teams after Kaepernick (Denver? Houston?), the Jets would be wise to force the 49ers’ hand and see if they release him or work out an injury settlement.