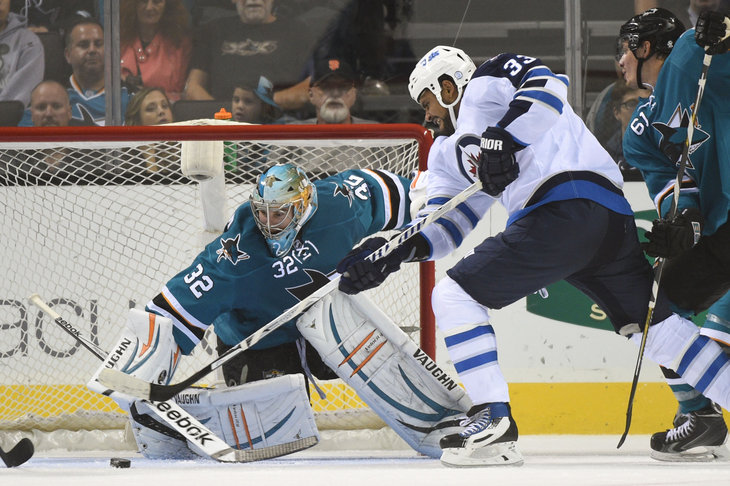 SAP CENTER — So the Sharks have yet to allow a goal this season. After opening their 2014 campaign with a blistering win over the LA Kings, with partial thanks to Antti Niemi’s shutout, the Sharks continued their winning ways as Alex Stalock pitched a shutout of his own Saturday night.

It’s the first time that San Jose has opened a season with back-to-back shutouts. The last time they registered consecutive shutouts during any season was back in 2006.

But Team Teal’s home opener victory was far from pretty, and the concern over problem areas weighed heavy on the team afterwards, despite snagging the 3-0 victory.

“The people that didn’t see the game are going to say ‘the Sharks are off to a pretty good start,’ but that was not a well-played game on our behalf,” head coach Todd McLellan said bluntly following the team’s win. “We probably played a good 26, 27 minutes, then after that we weren’t close to being the better team.”

Despite harnessing that same grit and momentum that they had in their first game in LA, San Jose cooled as the tilt went on. They went 0-for-8 on the power play, an area — while looking improved during exhibition play — that the Sharks struggled with last season. “We weren’t executing our passes and our power plays,” Patrick Marleau explained. “We just tried to do a little bit too much. Too fancy at times.”

Not to completely take away from Stalock’s performance. Having turning away 30 shots is nothing to sneeze at. “We feel confident in either (goalie),” Marleau said of the back-to-back shutouts. “They have proven that they are on top of their game.”

But even Stalock knew that the Jets had gained momentum on his team as the game went on. “They changed it up after the first period,” he said, but also admitted that the Sharks snagging two wins early on is good for the team: “Obviously, you know the hard work we put in early on is paying off.”

Marc-Edouard Vlasic put San Jose on the board early in the premier through with a shot through traffic, and some help from Sharks second liners Marleau and Logan Couture, to put the home team up 1-0 in the opening frame. A few shifts later Hertl scored a breakaway that eluded Pavelec’s stick, and put the Sharks on top 2-0.

Winnipeg picked up momentum towards the end of the second stanza and gave Stalock more work, but he stood pat and made a few tricky saves. Marleau helped give him some cushion with a gorgeous wrist shot up in the paint, with help from Nieto and Brent Burns to increase the score gap 3-0 with :29 seconds left before the second intermission.

The third period was more of a battle for the home team, with Stalock having to do the heavy lifting to make up for Winnipeg’s mounting attack and San Jose’s special teams not being able to notch another goal.

So what’s a team to do? McLellan explained that it will “take some time” to get the Sharks’ power play on track. “I thought our power play absolutely sucked the life out of our team today … we have some work to do.”

The Sharks will have to get that work done on the road and they start this Tuesday in Washington against the Capitals. They return to San Jose October, 23 to host the Columbus Blue Jackets. Puck drop for that game is scheduled for 7:30pm.