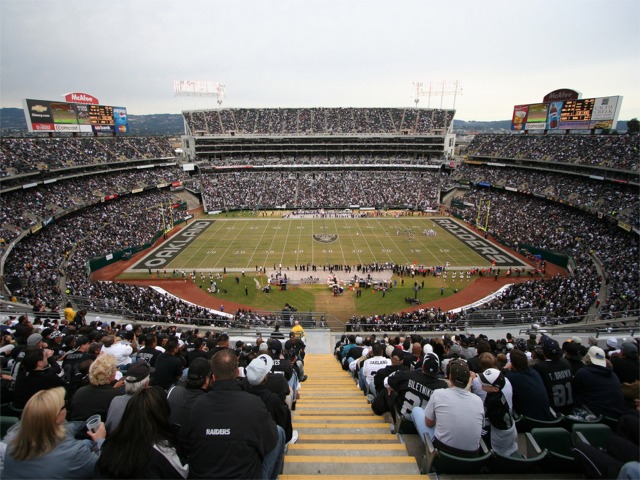 Yesterday the Oakland Raiders and San Diego Chargers made a surprise announcement that they planned on building a shared stadium in Carson, California (that looked an awful lot like Levi’s Stadium).

There is a three-team scramble between the Raiders, Rams and Chargers for up to two spots in the Los Angeles area. All three teams are, with varying levels of public support, trying to get new stadiums built in their current markets. One way to really crank up the pressure — and this is step one in the public subsidy extortion game — is to threaten to move, and the more credible the threat the better.

Of the three teams, the Raiders probably hold the weakest position. The Rams and Chargers are both owned by very wealthy individuals — Rams owner Stan Kroenke is worth $5.8 billion (with his Walton heiress wife adding another $5.6 billion to the family fortune) and Chargers owner Alex Spanos is worth $1.2 billion. Mark Davis looks like a pauper by comparison, with an estimated net worth around $500 million that comes almost exclusively from his family’ stake in the Raiders.

There is also the way that the different cities are going about trying to keep the teams. St Louis appears to be going the furthest after the city lost an arbitration ruling on plans to upgrade the Edward Jones Dome. The ruling allowed the Rams lease to revert to a year-to-year option, freeing them to move out of St Louis. The city has proposed a riverfront stadium. However, the Rams seem to have little interest with the current plan, instead eying an 80,000 seat stadium in Inglewood. The Chargers’ situation is similar to the Raiders, except they are looking for the city of San Diego to give them the rights to develop the Qualcomm Stadium site so they can use the profits (plus maybe some more sweeteners from the city) to build a stadium downtown.

There are a number of issues with the Raiders moving to L.A. Sharing a stadium is something Davis has dismissed previously when it came to potentially becoming co-tenants with the 49ers. Perhaps he would be open to the idea with the extra franchise value that comes with moving to Los Angeles, but it still doesn’t seem to fit with Davis’ modus operandi. There is also a relocation fee the NFL would request of all the teams that want to move to LA, which has been rumored to be around $250 million. Adding that to the $850 million the Raiders would need to come up with to fund their half of the stadium makes things difficult.

Finally, and most importantly, there is the actual idea of the Chargers and Raiders raising the $1.7 billion needed to build a stadium. Naming rights could help knock off $300-$400 million, plus another $500-$800 million for seat licenses, plus another $400 million in NFL G4 fund loans gets the teams somewhere in the range of $1.2 billion to $1.6 billion, leaving another $100-$500 million for the teams to cover plus relocation fees. For the Raiders, any extra money is going to be tough for them to cover, and comes with increased risk of financing things themselves.

With the owners of the Rams and Chargers more independently wealthy — where they could theoretically privately finance their own stadiums if they so choose — and cities that are offering much of their tax payer’s money to subsidize the teams staying in town, it is all the more important that the City of Oakland and County of Alameda don’t blindly hand over everything to the Raiders in an effort to keep them in town.

They already have the burden of paying for the renovations that were made to the Coliseum — which lured the Raiders back from L.A. — as a lesson that these subsidies can turn into burdens rather quickly. The land that the Coliseum sits on is very valuable and has the potential to transform a neighborhood even without any of the potential stadiums being proposed, let alone one that will only be used a handful of times a year.

“I know that the Raiders are in negotiation mode, so I respect that they are going to be looking at other options and be talking about them in a very public way. But it’s my job to stay focused on my objectives and that is to protect the public dollars, to keep all my sports teams in town and to add to the economic vitality of the Coliseum area.”

Hopefully Oakland calls the Raiders’ bluff and doesn’t give away taxpayer money for a white elephant.