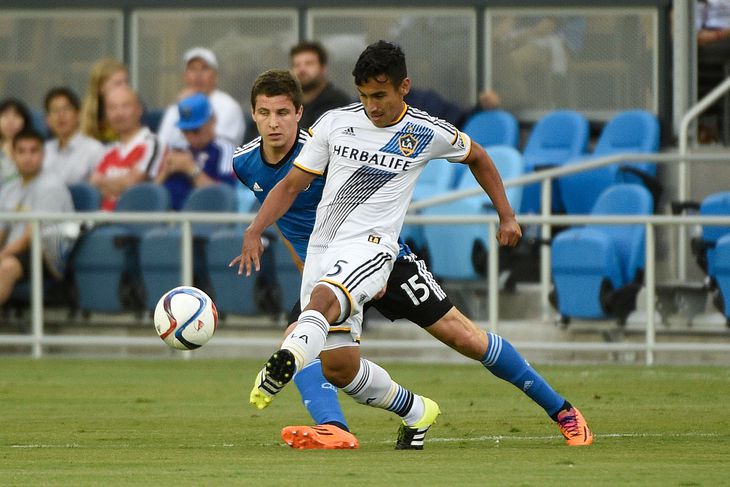 Remember last time I told you Chris Wondolowski was the center of Earthquakes offense? And have you noticed that I often write highly of Matias Perez Garcia and his contributions on offense? Well, both of them DID NOT play and the Earthquakes were shut out … by the L.A. Galaxy’s B-squad.

“You start the game slow, you can get punished for it, and now you’re chasing the game,” said Coach Dominic Kinnear. “It doesn’t matter how many chances you get or if you think you’re the better team, you need to start the game off correctly. I thought we might our lesson with the game against Sacramento because that was the same thing that happened, and obviously we’re playing against a better team— and even thought we worked hard, got ourselves in front of goal and got ourselves some chances—it’s the start that comes back to haunt us.”

Jose Villarreal scored on a beautiful lob from midfield by Kenney Walker. The small forward was able to get behind the Quakes back line, as many Galaxy forwards had been doing from the start of the game, and once behind, slid one past goalkeeper Bryan Meredith for the first and only goal of the game.

“It was just slow start from us, unfortunately,” recalled Meredith. “It was just a good run and he got in behind him. It was a decent goal.”

The goal served as a wake up call that, indeed, the Earthquakes were playing the Galaxy, once more, on a Wednesday night, at Avaya Stadium.

“Positively, from the 10th minute on, I think we were the better team,” said Meredith. “I think we worked harder, and I think we moved the ball better. We had numerous good chances, just unfortunate we gave up an early goal.”

Mark Sherrod, winner of the Quakes best scoring chance of the night award, had a goal called back due to him being offsides. It would have been the only shot directed on goal in the first half had it not been whistled illegal.

“Obviously, I think I had it. I don’t think there was enough camera angles. But I’d say if I was offsides, it was by a hair. I don’t think I was, but then again, I don’t know.”

In the first half, the offense seemed stalled at times, struggling to move the ball into the attacking third and not being able to finish golden opportunities. Realizing that they were down and about to be knocked out the Open Cup (once again), the Quakes urgency to score was very much apparent.

“I thought we were more aggressive,” said Coach Kinnear. “We passed the ball better. Our movement off the ball was better. Second balls were ours. I thought in the first half a lot of second balls fell to them. They got some chances out of it and some possession, where I thought in the second half we were around the ball a heck of a lot more. That’s the reason we were kind of knocking on the door for as long as we were.”

The Earthquakes threatened steady and often, but often missed the goal by inches. Leandro Barrera had several quality opportunities, but never found the back of the net. Adam Jahn was standing in front of goal, and only need to direct the ball forward into the net, but couldn’t get a foot on it.

It’s a shame too, because Bryan Meredith, once again, had a solid showing in net. Last week, Coach Kinnear said that Meredith would star every Open Cup match. And based on his play in the two Open Cup matches prior, the 25-year-old keeper out of Monmouth University deserves more playing time.

“You feel disappointed for Bryan in a way because the Open Cup, like I said before, all the games were going to be his no matter how far we went. I think he’s earned that and he’s played well. You want to make sure he gets minutes. Knock on wood, if we were to ever have to make a change in (goal) for whatever reason, I think we’d feel confident that Bryan’s had enough games under his belt, and is confident enough that he knows when he steps on the field he’s going to do a good job.”

It’ll be tough for Meredith to earn playing time over starting goaltender David Bingham, who is having a solid season in his own right. The loss speaks more to the team’s inexperience on defense, and its lack of offense with the top scorer and assist man out.

The Earthquakes will need to find someone to create some offense with Wondolowski and Cordell Cato leaving for the Gold Cup. And mistakes, like the one made in the sixth minute, will need to cease from happening.