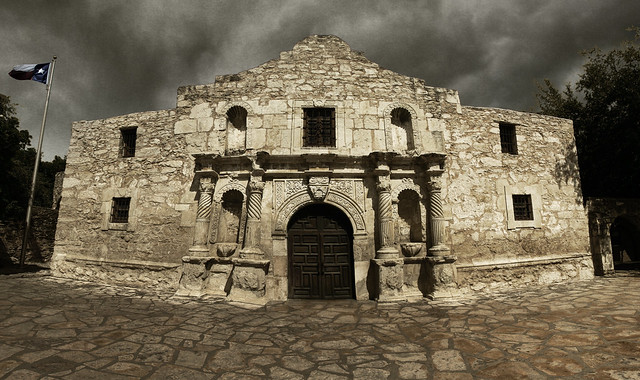 San Antonio, meet Irwindale. Two second and third fiddle cities in the union’s most populous states that have been used as negotiating levers in the Davis family quest to … feel wanted.

I’m going to try my best to make a list of cities the Davis Family has jerked around for love.

All California cities unless otherwise noted.

A personal note on San Antonio: my wife has family there and we visited once. San Antonio doesn’t feel like a city that has an NBA team. It feels much smaller, really.

We were there for her grandparent’s 60th wedding anniversary, and Thomas Gibson of “Criminal Minds” fame was a guest as his wife is a friend of my wife’s family. Nice guy. Apparently he lives in San Antonio because he doesn’t like the LA life. He flies coach to LA via Southwest Airlines because they have a hub in San Antone.

That said, it was still Texas.

My wife and I were directed to San Antonio’s Riverwalk District, because apparently that’s where you send folks visiting from California since Austin is too far of a trip to prove Texas is open-minded and hip.

As the photos show in that link show, it’s really nice to look at. Unfortunately, the first thing we saw as we headed to a nice cigar bar was a religious zealot holding a huge full-color poster of a late term abortion. It was the type of thing you’d expect from the Westboro Baptist folks. It was utterly horrifying. I’m not making any sort of political statement except to say that was a very blunt way to get your message across. I don’t need to see an autopsy photo of a gunshot wound victim to know that firearms are dangerous.

We had a drink and a smoke at the cigar bar, and I got a taste of Texas’ “Less laws, more fun” ethos. Nobody hassled me about drinking outside, and it felt odd to smoke a cigar inside a bar. I was starting to feel like my fears of Texas were misguided. In my entire 30-plus years of life, I’ve spent a total of one month outside of California. Weird, right?

Maybe Texas would be a good home for my family! Housing is cheap! You can smoke indoors! You can drink outdoors! You can carry guns wherever you want! Those belt buckles and hats are kinda badass! Yeah!

I was in the middle of contemplating a move to Lone Star country when some cops showed up and pulled two well-dressed men out of a bar next door.

I wondered if they were fighting. It was the first negative vibe I’d caught all night. This was not a seedy part of town … rather, the men were just as well groomed as the women. Everybody exuded that upper middle class confidence, and was full of “ma’ams” and “sirs”.

It was then that I heard another man shouting homophobic slurs from inside the bar. “Yeah, yeahs” followed his ugly words.

My wife and I quickly realized that these guys were gay, and they were getting harassed by the bar patrons, and the police weren’t doing anything to correct the belligerent drunk shouting terrible stuff from inside the bar. Instead, they were telling these two hurt-looking men to “move along and don’t cause no more trouble”.

Having only spent a month outside the Golden State in my whole life, this was a shocking scene.

I haven’t been back to Texas since.

And I won’t if the Raiders move there.

For one thing, it would be a blow to Mr. Davis’s legacy of being a civil rights pioneer. The Raiders don’t belong in a state that executes someone (often a poor minority) once a month, on average. He refused to let the Raiders play exhibitions in the segregated south when he was told that white and black players would have to stay in separate hotels. Indeed, California is the place for the Raiders.

The Davis Family is caught in a weird love triangle between the Greater Los Angeles area and the Bay Area, and it’s been that way for over 30 years. But the Davis family will humor any suitor, just like Kim Jong-Un will treat any American celebrity or tinpot dictator as a guest of honor. They both HAVE to. They have images to upkeep and facades of importance to maintain.

Instead of showing the City of Oakland that other markets desire the team, maybe they should put a winner on the field. It’s hard to take talk of a new stadium seriously when the team hasn’t had a winning record in over a decade. And that has nothing to do with luxury boxes. It has to do with mixed up priorities. Meeting with San Antonio officials to grab headlines as camp opens is just another example of this.

And besides, San Antonio already has one famous landmark to a losing cause: The Alamo. And Matt Schaub ain’t no Davey Crockett.