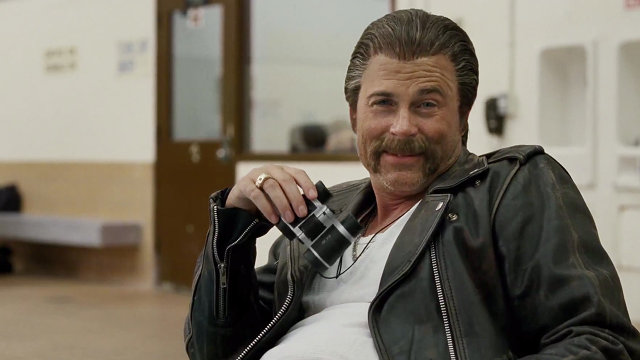 A tweet from Rob Lowe caught the attention of many this morning.

#NFL Re: new LA stadium. I don’t care about new age gizmos. Just make it LOUD. If I want white wine in peace, I can go to a #Niner game.

Granted, this is the same TV actor who posted this bit of nonsense over three years ago:

But Lowe is totally correct and the 49ers can’t claim otherwise, regardless of how many Wrestlemanias and Tractor Pulls that take place at Levi’s Stadium.

— Levi’s Stadium is the most expensive in the NFL, based on the tried-and-true “what does it cost for a family of four” scale.

— Michael Mina’s restaurant, Bourbon Steak, is located at Levi’s Stadium and offers “Kagoshima Rib Eye” at $34 per ounce (the minimum size, three ounces, will cost you $102 and take you about three minutes to eat if you take time to savor each bite).

— Via SFGate’s Matier and Ross back in July:

Want to see how far the 49ers crowd has come from bratwurst in the Candlestick parking lot and beer in the bleachers at Kezar? Check out the black-tie gathering that will open Levi’s Stadium in Santa Clara.

There’s a very VIP gala at the stadium Saturday, two days after politicians, civic leaders and the like cut the ribbon on the $1.2 billion stadium. A wine-tasting party for suite holders follows later in the month.

“They’ve always said it was a wine-and-cheese crowd. I guess the image is just playing out,” said Santa Clara County Assessor Larry Stone, who is getting his tux pressed for Saturday’s party.

However, the chances of Los Angeles building a new football stadium that’s equal parts CenturyLink and Lambeau are slim. They’ll have cutesy extras too, and L.A. fans aren’t exactly known for showing up early, staying late and/or straining their vocal cords while supporting their local teams. And if there’s a guy out there who seems like he’d enjoy sipping a fine Riesling while watching the Rams/Raiders/Chargers, it’s Lowe.

But the 49ers set themselves up for comments like these when they promoted the stadium as something more than a place to watch guys run into each other at full speed.

“We don’t want it to be compared to stadium food,” said 49ers President Paraag Marathe, who proclaimed the stadium has the most diversified menu in all of pro sports.

The “Faithful” were known as “wine and cheese” fans back in the 1980s, as CBS would air clips of fancy tailgates — lamb chops served with mint jelly, actual vegetables, tablecloths and Napa’s finest beverages — to get reactions from John Madden. “I doubt you’d see that in Green Bay!”

Meanwhile, many fans were downing handles of Cuervo in the parking lot, and concessions at Candlestick featured basic ballpark fare until the end. Now the new stadium has caught up with the old image of finesse fans who are too good for nitrite-packed hot dogs and fake-cheez nachos. With the prices they’re charging for seat licenses, parking and concessions, the 49ers are probably fine with this.