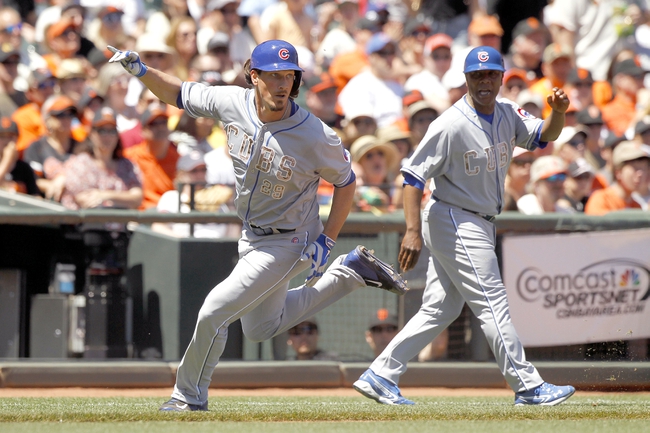 The Giants landed their first big fish of the offseason, and his last name is really difficult to spell. Here’s when it seemed likely that Jeff Samardzija would some day wear orange and black.

On May 26, 2014, Jeff Samardzija came into AT&T Park with insane numbers. He was 0-4. The Cubs were 1-9 in his starts. He had an ERA of 1.46. There were rumors that the Giants might try to land him before the trade deadline.

Samardzija struck out 10 over seven innings and allowed four runs (three earned), so his ERA went up slightly. But he emerged no longer winless after an 8-4 Cubs victory, which featured a home run by former Giants right fielder Nate Schierholtz. Samardzija hit a double off the right field wall in that game and received a beer shower in the visiting clubhouse from his teammates afterward, and I left the park thinking he might be one of the 10 most talented starting pitchers in the game.

Clearly Billy Beane thought the same, followed by the White Sox. But even after a rough season on the South Side of Chicago (he allowed the most earned runs and home runs in the American League last year), the Giants remain convinced.

Alex Pavlovic broke the news this morning: Samardzija and the Giants agreed this morning on a five-year contract. Apparently he will get $90 million, which makes this the biggest dollar amount the Giants have given a player coming over from another team since they signed Barry Zito.

On one hand, giving up that much money (and surrendering their first round pick, since Samardzija was a qualifying offer decliner) seems like a gamble.

Whenever you can lock up your future closer for $90 million it’s a no-brainer.

On the other, the Giants had good luck with another tall, strong-armed right hander with somewhat disappointing numbers.

Jason Schmidt never had an ERA under 4.00 before coming to the Giants. Once he arrived, he and the park meshed beautifully and Schmidt’s ERA was 3.36 in six seasons with San Francisco. His strikeout rate jumped quite a bit as well, as Schmidt either figured things out on his own or got a boost from working with Dave Righetti.

Granted, Schmidt was 28 when he joined the Giants in one of Brian Sabean’s better midseason trades (with all due respect to Ryan Vogelsong, who was sent to Pittsburgh). Samardzija turns 31 in January, albeit with less mileage than just about every starting pitcher on the market. That’s because he started only five games in his first four seasons with the Cubs. Since then, he’s pitched 174.2, 213.2, 219.2 and 214 innings over the last four seasons.

Anyone reading this has probably heard this from someone else, but it bears repeating. The White Sox play in a hitters’ park and were putrid defensively last season. The power numbers bear that out — he allowed 17 home runs and had an OPS against of .822 at home; on the road he gave up 12 home runs and opposing batters had an OPS of .711. His ERA was 4.96 last season, but his FIP (Fielding Independent Pitching) was a semi-respectable (but by no means great) 4.23.

Samardzija, a former wide receiver at Notre Dame, cost a little more than half what they were comfortable offering Zack Greinke. Losing the pitcher everyone is expecting to be the next Greg Maddux had to sting, but at least this gives the Giants some flexibility (the magic word of their offseason, ever since they let Nori Aoki go) to add another couple of pieces. Mike Leake is an obvious option, although one has to wonder if the Giants want to lock up two pitchers who aren’t quite top-tier starters over the next five years. They’re also interested in Ben Zobrist, who makes sense on every level for just about every team.

One thing we know is this means they are not signing Johnny Cueto. In fact, adding Samardzija (who reportedly preferred San Francisco over Los Angeles or St. Louis) effectively pushes Cueto to the Dodgers’ side of the table. “Here, you have him. Enjoy!” And it’s not hard to figure out why. The Giants trust certain numbers, but they also trust their eyes. Samardzija, despite giving up a few runs at AT&T in that start referenced earlier, looked incredible. The Giants surely remember Game 1 of the NLDS, when Cueto left after recording one out due to an oblique strain.

Greinke signs with D-Backs for six years, one more than Giants were willing to offer
Mike Leake back to the Giants looking more likely (if we can believe recent reports)
To Top
wpDiscuz