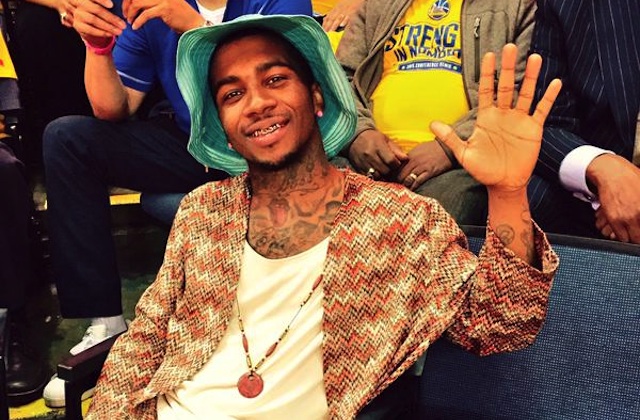 Lil B did it again.

The Based God blessed the Earthquakes and graced 18,000 with his presence at Avaya Stadium on Friday night.

If the Quakes make it into the playoffs, he’ll be the reason why.

Following their 1-0 victory over Sporting Kansas City, the Earthquakes sit in the sixth and final playoff spot in the Western Conference — tied with Seattle and Portland at 47 points apiece. However, both Seattle and Portland have a game in-hand on San Jose. And Portland, the team San Jose is currently keeping out of the playoffs, is playing Los Angeles tomorrow afternoon. Portland has gone 0-1-1 against LA this season, getting outscored 7-2.

“We don’t control everything. Now we have to wait and see what happens tomorrow and Sunday. You just hope the results go your way, ” Coach Kinnear said apprehensively. “I will be rooting for the LA Galaxy tomorrow … and Houston too.”

The good news for Earthquakes fans is that the “do-or-die” attitude the Quakes have forced upon themselves may be happening at just the right time.

“It shows the character of the team,” said goalkeeper David Bingham, who recorded his 12th shutout of the season. “When we need to win, all the guys show up.  Essentially, we’ve been playing towards the postseason for the last month. It comes down to the last game in Dallas. We finished the complete 90-plus minutes tonight and we need to do that in Dallas.  When we defend like we did tonight, we will get three points.”

Bingham is currently tied for second on the MLS shutout list with Vancouver Whitecap goalie, David Ousted. The league leader, by the way, is Portland keeper Adam Kwarasey.

The lone goal of the game came from a well-executed attack in the 47th minute.

Quincy Amarikwa, who had another strong game, connected with Shea Salinas who was able to cut in a swing a ball out wide to Captain and team MVP Chris Wondolowski.

“Wondo had said at halftime that he had been open far post a couple of times,” said Salinas. “We had been driving across the front of the box. Usually when I cut to my right, I look up and see Wondo floating back post. Just tried to hit it over to him.”

Wondo then volleyed a low pass across the mouth of the goal.

“I thought Quincy and Godoy both made a good run back post,” said the Quakes captain. “I was just trying to hit it across the face and hope they were there.”

The assist was Wondolowski’s first of the season, leaving only two players in the top 10 in goals scored in the MLS to not have an assist (Jozy Altidore & Cyle Larin).

The goal scored by midfielder Anibal Godoy was his second of the season.

“This game was big,” Godoy explained. “We had no choice but to win. Thankfully I was able to help this team win a game with that goal. I’m thankful for my teammates as they fought all night and really made that goal possible for me.”

All around, the Earthquakes played like a team desperate to make the playoffs. It was very apparent that everyone knew what was at stake and everyone gave their all.

Whether it was because of the team’s belief in itself and competitive spirit or the presence of Lil B that gave the Quakes the extra gusto, we’ll never know.

“We have to stay the course and keep believing,” Wondolowski said after the game. “It’s what’s been successful.”

Praise be to Based God.

MPG: Most imPortant Goal?
To Top