Yes, the bulk of the attention was aimed toward the departure TV analyst Drew Remenda by the end of the day, but the San Jose Sharks made moves that will affect the team on the ice as well.

San Jose was busy Tuesday, signing both goaltender Alex Stalock and forward Mike Brown to two-year contract deals. Both players would have been unrestricted free agents as of July 1.

Minnesota native Stalock was one of the biggest breakout stars of San Jose’s previous season, notching two shutouts in 24 games played, registering a 12-5-2 regular season record with a .932 save percentage and 1.87 GAA.

The 26-year-old not only performed better than starter Antti Niemi, but the Sharks played better in front of him as well — those franchise-record-breaking 178.55 consecutive shutout minutes and an ability to play the puck better than Niemi probably didn’t hurt either. Inking him for two more years shows confidence that the Worcester Sharks product will continue to do good things for the team, possibly even earn the starting spot in the Sharks’ 2014-15 campaign.

Re-signing Stalock to a two-year deal is also congruent with Doug Wilson’s claim that the team is in fact rebuilding and “going younger.” And that Niemi could potentially not be returning for the final year of his contract and be on his way out the door. 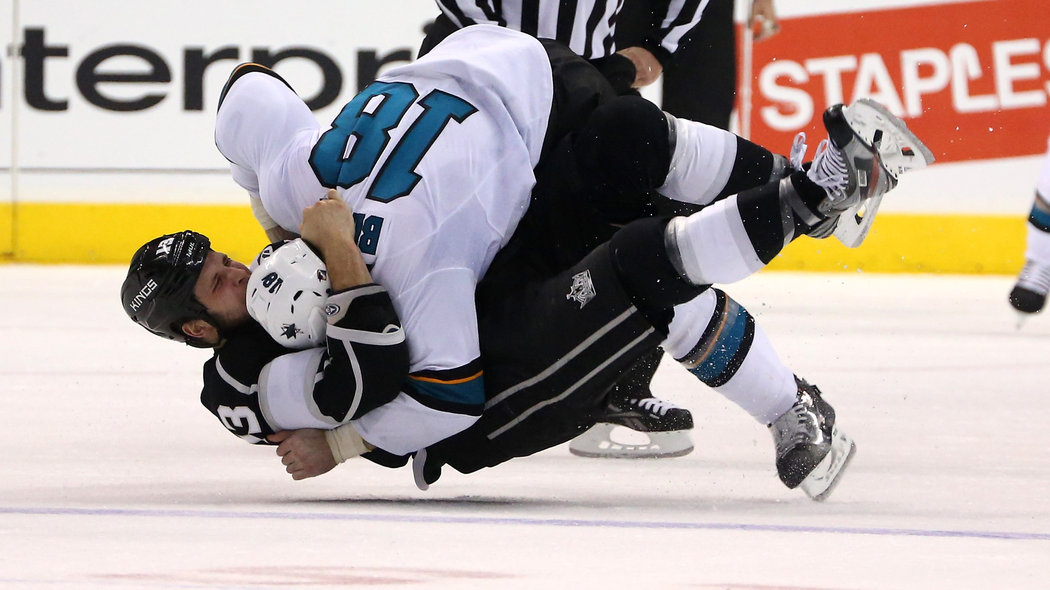 While the Stalock contract makes sense for San Jose in this time of rebuild, resigning Mike Brown has probably left a few fans scratching their heads.

The 28-year-old winger only notched five points (two goals, three assists) in 48 games with San Jose this past season, although he did spend a decent amount of time skating in and out of the penalty box whilst racking up those 75 penalty minutes.

He’s always cordial with the media, and his teammates certainly seem to like having him around. But Brown has left little to be desired on the ice since being acquired from the Edmonton Oilers on October 21, 2013.

He did notch two points (one goal, one assist) at the start of this past postseason. But it’s hard to look at anything San Jose did in a positive light after failing to close out the LA Kings in Round 1.

While the decision to keep fourth-liner Brown doesn’t seem to fit the rest of the “rebuild” bill, Wilson has made mention of taking a few steps back in order to take a few steps forward. This could be one of those steps, or maybe just a stepping stone in sending another forward out the door.

San Jose Sharks confirm: Drew Remenda will not return next season
Sharks tender QOs before the opening of free agency
To Top
wpDiscuz