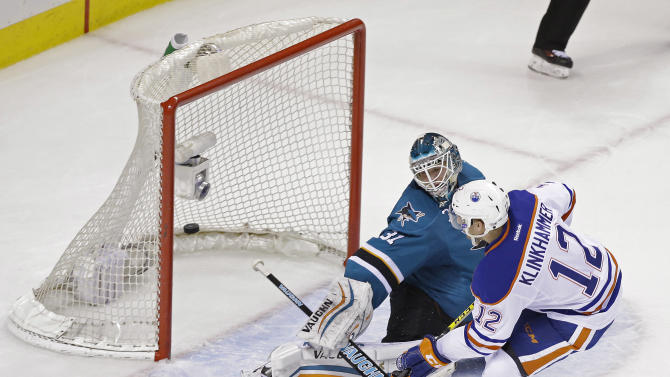 The entirety of Monday’s Sharks game could be summed up with Tomas Hertl’s change in facial expression in the first frame. With the tilt tied up 1-1 with the first intermission looming, Hertl put a shot past Edmonton Oilers netminder Viktor Fasth that was, just a few seconds later, disallowed because of “goalie interference.” Number 48’s expression changed from that of celebration to a look of a disheartened disbelief in a drop of a hat.

The range of emotion fit the rest of a game in which San Jose rallied back from after an early lead turned into a 3-1 deficit, only to lose to the visitors 5-4 in an 13-round shootout loss.

Yes, 13 rounds. That’s a lot of hockey to endure such an emotional rollercoaster. Not to mention one at the end of a long and pretty darned impressive homestand.

Although head coach Todd McLellan thought the passion wasn’t there at all during the second 20 minutes, in which the Sharks went from being tied 1-1 with the Oilers to trailing by two goals.

“We got outworked in the second period, and out-emotioned,” he explained. “We were flat, we didn’t have the piss and vinegar that it takes to win.”

Joe Pavelski, who had two goals on the evening and almost notched a hat trick in the waining seconds of regulation that would have won the game for San Jose, had a slightly more positive look on how the team battled back in the third period to score three goals in less than 10 minutes.

“We battled hard in the third and got back,” said Pavelski. “But … (sigh) … found ourselves on the short end at the end.”

Which part of the roller coaster stands out? The battle back in the third, or not being able to get the points? Matt Tennyson explained that it was a bit of both. “First couple of periods we obviously could have played better. To be able to come back shows some adversity from us. It was good for us to come back there, but at the same time we didn’t win the game.”

San Jose converted on their first power play attempt of the evening when Pavelski drew the puck into his skate and flicked it past Fasth. But Edmonton star Jordan Eberle tied it up with a beauty as he skated around the Sharks defense and poked the puck in around Antti Niemi’s right skate. Hertl tried to give San Jose the lead back before the first 20 expired, but the disallowed goal took the wind out of the Sharks’ sails.

Eberle scored again, on a choice rebound to open up the second stanza, giving Edmonton their first lead on the evening 2-1. San Jose’s top six had two great shifts but couldn’t find the back of the net, which was made worse by Derek Roy building up the Oilers lead with a shot from one knee that Niemi missed up high.

Emotion picked back in the third when the Sharks took the lead back from the Oilers. Joe Thornton’s shot from the left circle might have missed if Scott Hannan hadn’t been in place to scoop the puck in past Fasth and cut the lead down 3-2. Just over a minute later Matt Tennyson launched the puck past Fasth to knot the tilt back up 3-3. Then it was Pavelski from one knee that beat Fasth to give the Sharks the lead back 4-3 that really brought the house down.

Life was sucked out of the crowd as Edmonton’s Justin Schultz went five hole on Niemi with a little over two minutes left in the third frame to knot things back up and send the tilt into overtime. After a back-and-forth fifteen minutes of extra hockey, the tilt carried into what would be a very long shootout battle. It looked as though Brent Burns backhander in the ninth would be the shootout winner, but it was answered by Ryan Nugent-Hopkins. Edmonton’s Rob Klinkhammer broke up the increasingly lengthy shootout battle by getting the puck past Niemi, who had made a very good showing against the first 12 opponents he had faced.

“Nemo played great in that shootout, we’ve got to find a way to get one by earlier in that shootout,” Logan Couture said, before adding that San Jose should have fought better early on not to be in that position.

“We gave up too many shots, too many chances, let them play in our end too much. It was good for us to fight back there, get the lead, but obviously that late goal hurt us a lot.”

Not a way any team wants to end a long homestand, and McLellan cited the changing level of play.

“The way we played in some of the games (over the homestand), we’ve got to be really happy with the performances. And then (tonight) we’re at the other end of the spectrum where we’re really disappointed. Our team has to find that medium where we don’t get too high and we don’t get too low.”

— With his power play goal in the first frame, Joe Pavelski is tied with Alex Ovechkin for most PPGs in the NHL with 14.

— With his assist on Pavelski’s second goal, Joe Thornton registered his 600th assist in a Sharks sweater.

— Scott Hannan’s goal in the third was his first goal of the season.

Niemi shows he is the better “Antti” by shutting out the Blackhawks
Couture on Sharks’ loss to Hurricanes: “You kind of get what you deserve.”
To Top
wpDiscuz