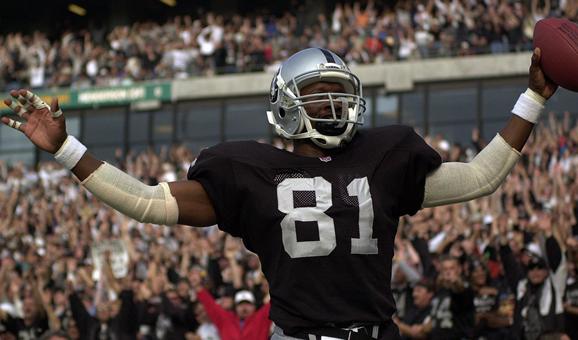 The Oakland Raiders have 22 players and front office personnel in the Pro Football Hall of Fame, but Tim Brown, one of the franchise’s greatest players, is not among them. Brown is a finalist for the Hall of Fame for the sixth, and hopefully the last time. After putting together an impressive career with less-than-impressive quarterbacks, Brown is deserving of having his wait come to an end.

Brown is fifth all time in receptions with with 1094, sixth all time in receiving yards with 14,934 and is tied for 17th all time with 105 touchdowns. Those are impressive numbers for any wide receiver, but even more so considering who was throwing the ball.

Not exactly a star-studded group of passers, but that didn’t stop Brown from putting up some of the best numbers for a receiver in league history.

Last year, Brown watched Andre Reed and Chris Carter go in while he continued to wait. His competition is not so great this time around, and he’s hopeful that it means he has a much better chance of finally achieving his goal: “Certainly the logjam is not the same. Obviously Marvin Harrison is out there, so that’s one guy, not two guys.”

But while Brown watched other receivers go in before him in 2014, he also watched Ray Guy become the first punter to make the Hall. Many believed for years that Guy had no chance of getting inducted, despite his impressive stats and the fact that he flat-out changed the game of football. But Guy is now a Hall-of-Famer, and both the Raiders and their fans hope that Brown’s wait will come to an end this year.

Raiders rejected by Grantham, still struggling to land quality coaches
Could Raiders poach their next defensive coordinator from Seahawks’ staff?
To Top
wpDiscuz