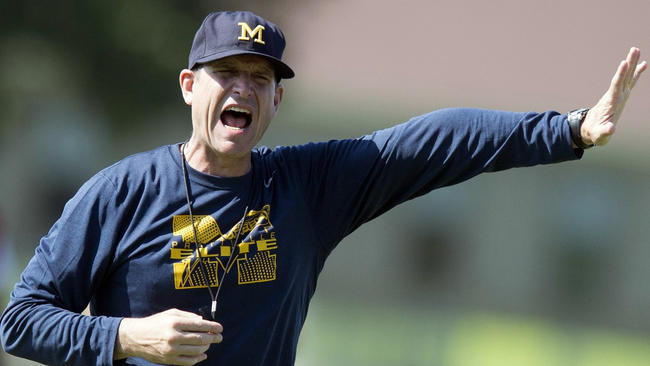 To say Michigan has improved since last year is a drastic understatement. They’ve completely changed. Last year, Notre Dame handed the Wolverines a 31-0 defeat in their second game, effectively ending Michigan’s hopes of returning to dominance. The 2015 Wolverines have won their last three games (two against ranked opponents) by a combined score of 97-0, and now they’re the No. 12 team in the country.

At the center of it all is Jim Harbaugh, the subject of a very interesting story on ESPN’s Big Ten Blog titled, “The Harbaugh Effect is in full effect at Michigan.” The author, Dan Murphy, attempted to pinpoint what exactly Harbaugh brings that leads to these massive turnarounds wherever he goes. The answer seems pretty simple, really. He pushes his players past their perceived limits and creates bonds through extreme discipline and exertion, both mental and physical.

The rest of Smith’s teammates are at a similar loss for words when asked to identify why Harbaugh’s calls for hard work seem to resonate more than just about any other coach in the country. It’s not that they won’t tell you, it’s that they can’t. It’s more of a mystery than a secret. Michigan players have a hard time remembering when and why they started to believe in one another.

“I really don’t know, to be honest,” Smith said. “I guess maybe when we realized we were having four-hour practices.”

Smith said he didn’t realize it in the spring, back when Harbaugh was keeping his team on the field for the maximum amount of time allowed by NCAA rules for each session, but in retrospect he says that’s when they learned to lean on each other. The four-hour practices haven’t returned this fall, but their effects are now paying dividends.

All of the quirky Harbaugh methods that made the outside world shake its collective head this offseason are now what his players point to when prodded to think about why they’re having success.

He holds footraces to see who will earn a spot on special-teams units and keeps track of the winners. Senior Jehu Chesson is usually the top finisher, and he was the one with the ball on a 96-yard kick return to start Saturday’s game with a touchdown. The reward for winning practice competitions in camp was running more sprints, because it’s a privilege to be able to work hard. So it’s no surprise that instead of enjoying the final minutes of a 38-0 shutout by waving towels on the sideline, Michigan’s defensive starters were flying to the ball on Northwestern’s final series Saturday night.

This is exactly what Harbaugh brought to a 49ers roster that had been stuck in the NFL’s mediocrity pit for several years. The talent was there, and Mike Singletary had the team working pretty hard to get tougher (the infamous “nutcracker” drills come to mind), but the bridge between sweating together and believing in each other hadn’t yet been built.

Harbaugh’s methods work … for a period. That might be why he’s perfect in college, since the players are gone at just the exact point they realize they’re getting sick of him. College kids know that once they’re finished, they can commiserate about the hard times and start to love them in some sick way, sort of like a football version of boot camp.

“He does a great job of giving you that spark, that initial boom,” 49ers guard Alex Boone told Andrea Kremer. “But after a while, you just want to kick his ass … He just keeps pushing you, and you’re like, ‘Dude, we got over the mountain.  Stop. Let go.’ He kind of wore out his welcome.”

“What does that mean?” Kremer asked.

A lot of people will respond to this post with some variation of “DUDE, STOP OBSESSING OVER HARBAUGH. HE’S GONE AND HIS OFFENSE SUCKED ANYWAY.” Here’s how I would respond to this hypothetical response from the get-over-it masses.

His offenses do exactly what he (and his DCs) want

While a good segment of people seemed to expect that Harbaugh — never as flashy during his playing days as contemporaries such as John Elway, Dan Marino or Brett Favre — would be some sort of offensive genius, he’s a smash-mouth coach who always seems to find himself surrounded by excellent defensive coaches.

If you’re a brilliant defensive mind, why wouldn’t you want to work with someone who will (1) stay out of the way, (2) know enough about offense to keep the chains moving without (3) taking risks that put the team’s defense in unmanageable positions? There’s nothing defensive players and coaches like more than a ball-control offense that wins the field position and time-of-possession battles, and that’s what Harbaugh brings.

Harbaugh will never be a 10-year coach anywhere

Harbaugh deserved a shot to coach out the final year of his contract based on previous record, but there’s no guarantee that he would’ve brought the 2015 49ers back to the playoffs. And if he couldn’t work with his bosses, he wasn’t going to stay any longer than one more year anyway. The 49ers’ major mistake, at least if we focus on what the “Harbaugh Effect” truly is (toughness, conditioning, togetherness), probably came when they hired a coach who made everyone a little too comfortable.

That’s what they did, because the coaching switch clearly had nothing to do with the team’s offensive struggles. Otherwise they would’ve gone after a respected play-caller/designer instead of promoting Jim Tomsula and Geep Chryst. Tomsula made Jed York feel better. There was no way he’d question the methods of Trent Baalke or Paraag Marathe. And one area where the team felt they could improve — other than offense — was injury-prevention and the team looking run down as the year progressed.

There’s no doubt that Tomsula’s training camp went smoothly, but we can say with similar certainty that it was far easier for the players than a Harbaugh training camp. Tomsula often held practices in the evening, when it was cooler. Players with tweaks were given precautionary days off more frequently. There were no complaints about practices going too long. Harbaugh was thought of by some as a dinosaur, and the 49ers were proud of how Tomsula changed the culture to something resembling a tech company.

As players arrived for voluntary workouts and minicamps this spring and summer, they noticed sweeping changes designed to cater to how research shows millennials learn. That means making concessions for people with shorter attention spans, a desire to multitask and, yes, a need to check their phones all the time.

Facing this new reality, the 49ers turned the typical meeting, which on some teams can go for as long as two hours, into 30-minute blocks, each followed by 10-minute breaks that allow players to do what young people do. That is, as Tomsula puts it, to “go grab your phone, do your multitasking and get your fix” before returning the meeting.

If the 49ers wanted to bounce back with Baalke’s “reloaded” roster, the answer wasn’t to keep a so-called players’ coach with whom everyone was familiar, and let the team know that things would be easier from now on. They should’ve either gone out and gotten the best offensive mind possible, or hired another nose-to-the-grindstone type that would spend every day reminding the players that they needed to work even harder to withstand all of the post-Harbaugh departures.

However, the key part of the equation — one the Michigan players couldn’t quite explain — is how Harbaugh gets through to players better than any task-master in recent memory. Finding someone at Harbaugh’s level wouldn’t have been easy … especially compared to the 49ers’ convenient decision to hand the reigns to the man they call Jimmy-Tom.