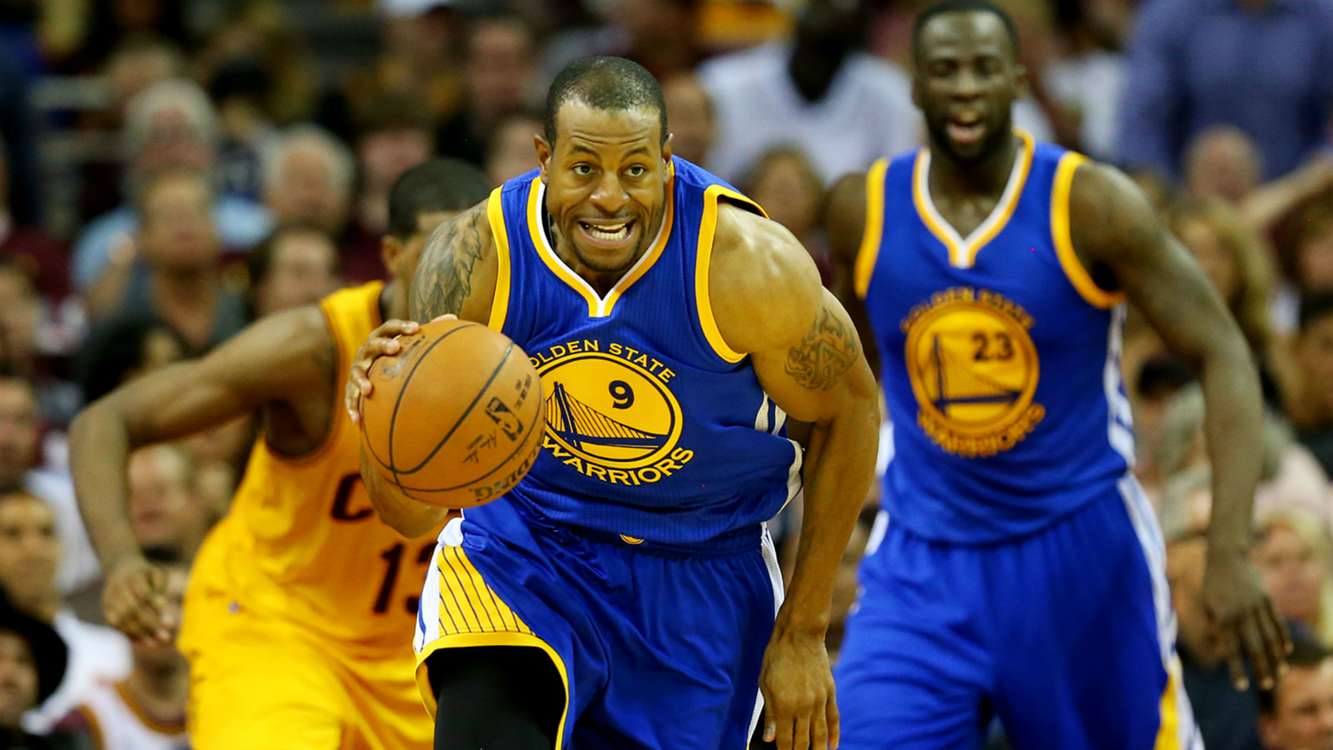 Steve Kerr lied to the media, and not one Warriors fan will (or should) mind. All day he told reporters he’d utilize the same starting lineup we’ve seen for weeks, but in the minutes before Game 4 we finally learned what Kerr and his team knew all day (if not earlier): Andre Iguodala would start in place of Andrew Bogut.

For three games, the Warriors repeatedly ran into the Cavs’ frontline and bounced backward, as if LeBron James, Timofey Mozgov and Tristan Thompson were a brick wall and all the Warriors had at their disposal were down jackets. Kerr realized that even though Bogut and Festus Ezeli are capable players who successfully vanquished Dwight Howard, this was a different test entirely.

The Warriors don’t hold the size advantage, they hold the depth and speed advantages. And the Warriors’ depth doesn’t necessarily mean they have to play 10 guys significant minutes. They’ve repeatedly harped on the point that the Cavs only play seven guys, but only seven Warriors played more than 10 minutes, with Stephen Curry’s 41 minutes (22 points on 8-of-17 shooting, four threes and six assists) leading the way. But the Warriors have choices, and on Thursday they made the right one.

Shaun Livingston was a HUGE plus

David Lee played 15 minutes. He was the first guy off the bench, and despite a few missed layups he was a net postive (9 points, 5 rebounds, some impressive defensive moments against Mozgov, +4 on the night). But the top reserve of Game 4 was Livingston, who grabbed 8 rebounds in 24 minutes to go along with 7 points and 4 assists. He defended. His plus/minus of +25 led everyone. Most importantly, he fits perfectly with the team’s new motto …

Run those damned Cavs off the court.

But it all started with the best running player on the Warriors.

Klay Thompson started the game on LeBron James, and others pitched in. But James was Iguodala’s responsibility more than anyone else’s, and Iguodala had one of his best defensive performances of the season (along with Game 5 of the Western Conference Finals against James Harden).

The Warriors needed someone other than Curry to score, and Iguodala tied Curry for the team lead in points with 22. The Cavs didn’t respect his outside shot, and Iguodala made them pay by making four rainbow threes in nine attempts.

The Warriors spotted the Cavs seven points at the start of this game, and with the pace (slow-ish) and the Cavaliers’ play (very strong) looking similar to what we saw in the previous three games, Kerr’s lineup switch looked like it would change nothing. The Warriors started making some shots here and there, and after James shook Iguodala and made a layup, Iguodala pulled off a play that set the tone — instead of hanging or shaking his head, he took off. He got the outlet pass from Draymond Green, and easily won the race to rim as he dunked with one hand. It was a key moment in a 31-point first quarter, the first quarter the Warriors ended with the lead in this series (unless you count their lead at the end of overtime in Game 1).

Golden State had 11 fast break points on the night. They weren’t exactly the Showtime Lakers, but they were a lot more mobile than they were in Game 3, when they had four fast break points. They were 12-for-30 from three, not a whole lot better than Game 3 (12-for-34). They made 36 field goals in Game 4, the same total as Game 3. It was how they scored their points and swarmed defensively that turned this series around.

Hey, they gave the big-man game a healthy try — they had 18 offensive rebounds in Game 3 — but that’s not the way they’re going to beat the Cavs. The grind-it-out game is what the Cavs need to maintain their wind and thrive, and Cleveland was exhausted in Game 4. James admitted he was “gassed” after playing the entire third quarter. Meanwhile, a player who looked nothing like he did throughout the season through the first three games of this series — a player who looked like he may have been overworked in the first three playoff series — came back to life.

The return of Draymond

Green said after the game that he was his fault that the Warriors were “soft” in Games 1, 2 and 3, and that his now-famous mom and probably soon-to-be-famous grandmother said he was “crying too much.” The self-awareness from Green is impressive, especially in a public setting like an NBA Finals postgame press conference, but his play was even better. The back was still sore, but he had a signature Green game: 17 points (6-for-11 from the field), 7 rebounds, 6 assists, 2 steals, 1 block, 5 fouls, and an “AND-ONE!”

Bogut is now just a spare part in this series and Ezeli didn’t even play (James Michael McAdoo and Justin Holiday both got some garbage time run, along with Mo Speights), and it’ll stay that way. The Warriors will hope Mozgov and Thompson miss close shots while swarming James, a strategy that makes sense (like the Cavs worrying about Curry and Klay Thompson while letting everyone else shoot).

Mozgov led all scorers with 28. He was outstanding. The Cavs still lost by 21 at home. So we’re going to see some sort of counter-adjustment from Cleveland in order to take some of the heat off James and get the pace back to snail-status. What will LeBron … err, Blatt … decide?

Oracle Arena is going to be insane on Sunday. Will the Warriors soar to new Finals heights or go back to feeling the pressure? Game 4 seemed like a breakthrough, but no way have they mentally defeated LeBron Raymone James with one measly win. He’s seen it all before.

— Mark Jackson: not a fan of Harrison Barnes.

— I wish I knew what Matthew Dellavedova said to Lee at the end of the first quarter after bumping him. Lee isn’t as blatant as Dellavedova, but he’ll throw an elbow and gouge an eye from time to time. Maybe Delly is one of those guys who can dish it but can’t take it?

— One thing Delly shouldn’t take — as many shots. He went 3-for-14 with just four assists. He’s playing like a guy who read all those stories about him when he was in the hospital getting rehydrated and saw the kid behind the Cavs bench holding a Delly fathead. Cleveland doesn’t have a lot of offensive threats, but Dellavedova should worry less about his own threes and more about getting other guys open.

— And yeah, so much for the Dellavedova-is-a-Curry-stopper talk.

— The third quarter was when the Warriors weathered the second storm of the game (the first came early in the first quarter, as Kerr mentioned during the team’s first timeout). Golden State fought off Cleveland with threes. When the Cavs made it 65-62 with Dellavedova’s alley-oop to James, the Warriors came out of their timeout with a three by Harrison Barnes. At the end of the quarter, after James made a free throw and the Warriors led 73-70, Curry made a three and let out a nice yell that was caught on the ABC microphones as the crowd went silent. The game was Golden State’s at that point, as the Warriors started the fourth quarter on a 6-0 run and led by double-digits the rest of the way.

— Did Iman Shumpert’s shoulder injury linger? His defense on Klay Thompson was impressive, but he went 2-for-9, 1-for-5 on threes. (Credit should go to Klay for not forcing his own offense in Game 4, however.)

— James had one of the least impressive almost-triple-doubles (22/12/8) in recent memory, although he did cut his head after colliding with a camera on the baseline. It’s pretty amazing that the NBA allows cameras that close to the action without any barriers. It’s also pretty amazing that in this day and age, a guy can slam his head into a heavy object hard enough to cause an open wound and not go through the concussion protocol.

— James’ head injury required stitches, and his fall was caused in part by a pretty hard foul by Bogut, who committed three of them in less than three minutes. Bogut probably likes his new role, actually.

— How tired was James? Barnes blocked one of his shots.

— The Warriors had only seven turnovers, showing they can actually take care of the ball when they have no other choice. Barnes (33 minutes), Green (39 minutes) and Klay Thompson (39 minutes) went through this game without turning it over once.

— Klay Thompson didn’t do a whole lot statistically, but his defense was solid and he shhhh’d the crowd at the end (reminiscent of his boisterous — for him — behavior at Staples in last year’s playoffs). The Cavs looked like the more confident team throughout Game 2, Game 3, and the first half of the first quarter of Game 4, but there was no doubt who felt better about the future as Game 4 drew to a close.

Mark Jackson on Harrison Barnes: “He never bought in” last season
The Warriors are one win over a defiant, confident LeBron James away from a championship
To Top
wpDiscuz