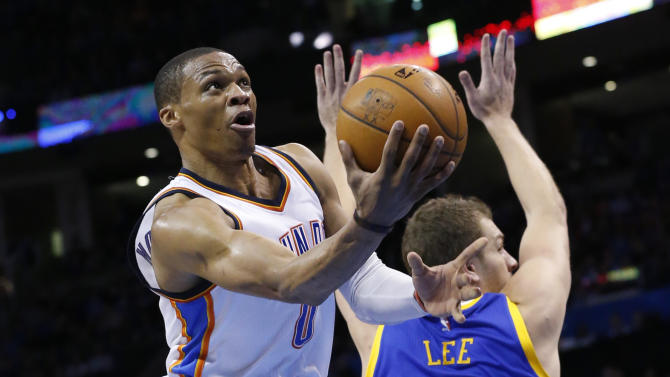 The Western Conference playoff picture is getting clearer by the day, and the Warriors should have a pretty good idea who they’ll face in the first round. Hint: it probably won’t be the team they beat by 16 last night in Oakland.

Unless something kooky happens, the Golden State Warriors will start their playoff run with a best-of-seven against the Oklahoma City Westbrook. OKC is two games up on the Pelicans (which, as we saw last night, are a pretty bad team without Anthony Davis), and 4.5 games behind the Dallas Mavericks with 13 games remaining.

Disclaimer: Yes, the Pelicans won the season series 3-1 against OKC. And New Orleans wasn’t just without Davis, they were missing Omer Asik, Jrue Holiday and Ryan Anderson last night as well. But I just don’t see Russell Westbrook allowing his team to lose a two-game lead at this point.

The real DangerRuss (with no due respect to Russell Wilson, the safest star athlete in the United States) went off once again in OKC’s 123-115 win over Atlanta last night: 36 points (8-of-24 from the field; 17-of-17 from the line), 10 rebounds and 14 assists. It was Westbrook’s seventh triple-double in his last 12 games. He played 44 minutes last night, marking the sixth time he’s been in for 40+ minutes in his last 11 games.

That frantic pace, which would probably leave just about anyone in the league exhausted perhaps Westbrook himself, won’t end anytime soon. OKC General Manager Sam Presti announced yesterday that Kevin Durant would be out “indefinitely,” in effect admitting that Durant’s season is probably over.

That’s on top of Serge Ibaka undergoing arthroscopic knee surgery this week, a procedure that’s supposed to keep him out four-to-six weeks. Four weeks from the date of his surgery would make him available on the day before the last night of the regular season, and without Durant it’d be foolish of OKC to push Ibaka back into action in hopes of upsetting a Golden State team that — at this rate — should be able to rest all of its key players in the last week of the regular season.

OKC was the quintessential team-nobody-wanted-to-face, but that was back when there was a chance that their top three players would be available. Facing the Oklahoma City Westbrook won’t exactly be a cakewalk, but there are a few things the Warriors can do.

1. Trap Westbrook at halfcourt (or even earlier)

Teams do this with Stephen Curry regularly. It isn’t the Warriors’ style, but the rest of OKC kind of cries out for a departure from the team’s standard strategy: long-limbed and vicious man-to-man-with-lots-of-switching defense.

Dion Waiters is up-and-down depending on the game, and they started some guy named Mitch McGary (or is it Gary McMitch?) against the Hawks at power forward last night. So if you keep an eye on Anthony Morrow behind the arc and don’t let Steven Adams torch you on the offensive glass, you should be fine.

But the Warriors got to where they are without trapping any primary ball-handlers (other than a few end-of-game situations, usually when Draymond Green pounces like a hungry shark on a player he thinks he can bully), so they’ll probably play Westbrook fairly straight up.

2. Let Westbrook tire himself out

Is it even possible? Probably not, but allowing Westbrook to shoot a ridiculous number of times has worked for other teams — OKC is 2-5 this season when Westbrook scores 40 or more. This is another reason why the Warriors probably wouldn’t even consider trapping him with any sort of regularity.

3. Give Westbrook a healthy dose of Justin Holiday

The only reason to stick Curry on Westbrook for the entire series would be Curry’s pride, and there’s a lot more basketball to worry about after the first round. Klay Thompson would be the obvious answer as a guy to stick in Westbrook’s path, but we don’t know the severity of his recent ankle injury. He should be fine in a month, but will he be able to chase Westbrook around? Probably, but maybe not for long stretches.

There’s always Shaun Livingston, and Andre Iguodala can help out a little considering how light on his feet he’s looked lately, but this almost-inevitable matchup could be an opportunity for Justin Holiday to make an impact on his stronger side of the floor. He’s long, fast and his legs are fresh. Steve Kerr won’t want to see Holiday look for his own offense all that often (or ever) in the playoffs, but he’s a good guy to have around to keep Curry and Thompson from getting too wrapped up in Westbrook’s personal mission to be known as the baddest player on the planet.

Since you’re probably reading this on a lazy Saturday, why don’t you pull out your phone (or continue using it, if that’s how you got here), download Daily Bracket and join our BASG group? We’re going to give away $50 after this weekend for the winner of this week’s contest, and we’ll be doing one more giveaway of $50 for next week’s winner as well.

I’ve been playing every day for about two months now, so I guess I’m addicted at this point. But this is a relatively healthy addiction, unlike my tortilla chips and salsa and Bi-Rite ice cream habits.

For Warriors and Festus Ezeli, patience is paying off at the right time
Leandro Barbosa came up with a catchphrase after last night’s Warriors win that’ll stick around a while
To Top
wpDiscuz