Everyone makes mistakes. Every team makes mistakes. The key is to learn from past errors. If you can’t remedy them, at least avoid repeating them. The 49ers keep failing at the latter, leading one to wonder if they’ll ever learn. 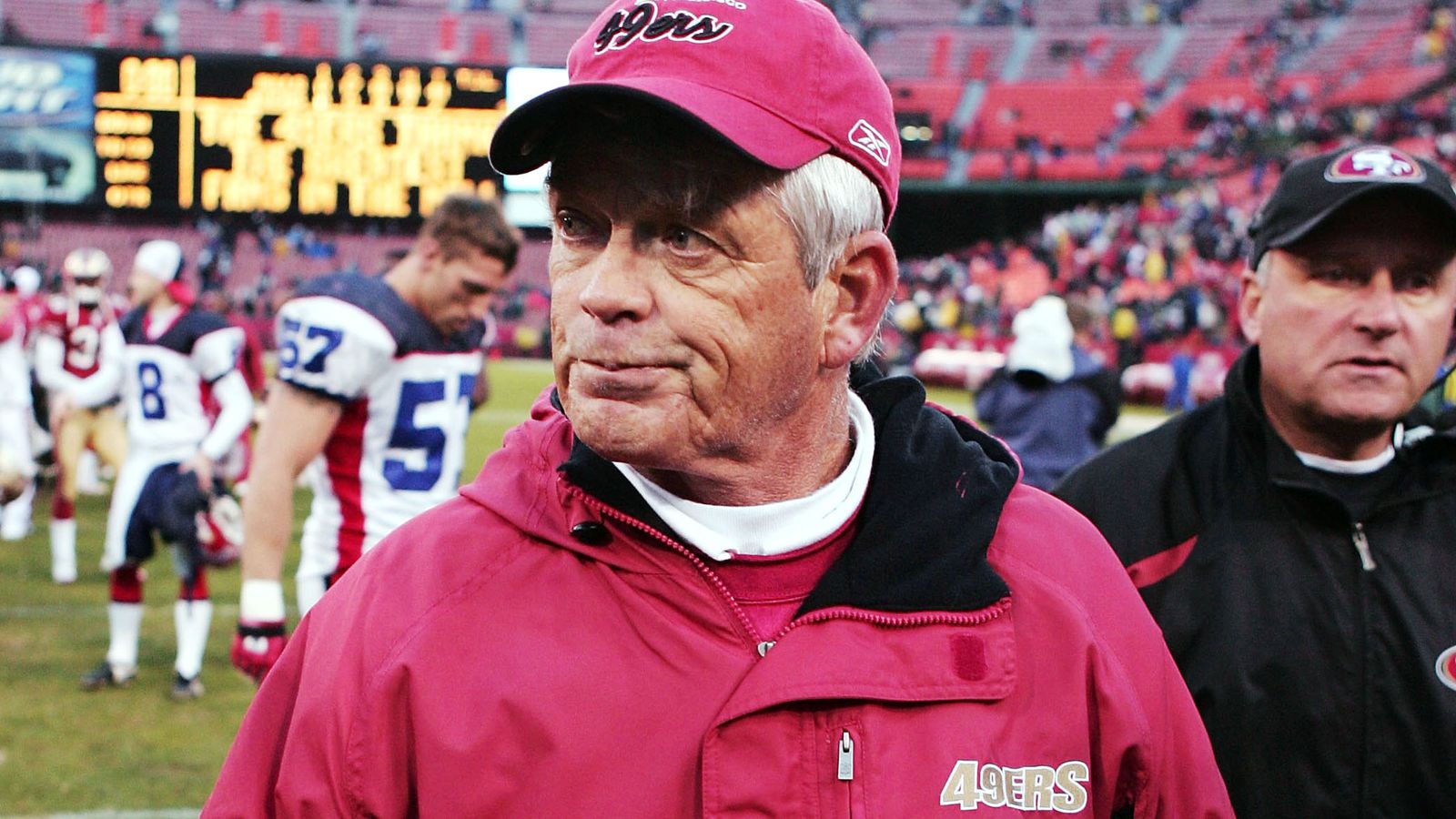 They replace successful coaches with slugs

The 49ers fired Steve Mariucci after the team won 22 games in its previous two seasons. Instead of replacing him with a respectable choice who would logically follow the Walsh-Seifert-Mariucci pattern of competence, they ended up with Dennis Erickson.

We all know the story here.

At least the 49ers’ “Plan A” was probably to replace Jim Harbaugh with Jim Tomsula, whereas Erickson was the fallback option after they couldn’t get anyone better. But Tomsula was an even worse head coach than Erickson.

At some point they have to realize that “where there’s smoke, there’s fire” is an oft-used cliche for a reason, right? On second thought, that’s probably giving them too much credit.

— Aldon Smith was arrested three times, and he was also charged with “three felony counts of illegal possession of an assault weapon” from a different incident, but the 49ers kept him around anyway. It wasn’t until his fifth legal matter (hit and run, driving under the influence and vandalism charges) that the 49ers finally cut ties with the pass rusher, who is currently in rehab and serving a one-year suspension.

— Ray McDonald was arrested for DUI in 2010. He was arrested on suspicion of domestic violence on Aug. 31, 2014, about a week before the season started. The 49ers allowed him to continue playing until he was named as a suspect in a sexual assault investigation, which led to his release on Dec. 17, 2014. (One could claim the Bears have some learning to do as well. They signed McDonald a few months later, then released him in May 2015 after he was arrested for ANOTHER domestic incident.)

— Bruce Miller pleaded no contest last year after an incident in which he was initially charged with shoving his ex-fiancee and smashing her cell phone. He denied touching her, but today the 49ers released him after KTVU reported a very serious incident last night which could land him in prison for a long time.

Miller allegedly tried to check into the Fisherman’s Wharf Marriott Hotel on Sunday night, but was told the hotel was full.

Sources say he returned Monday morning and knocked on one of the guest room doors.

The room was occupied by an elderly couple who did not know Miller.

The neighboring guest, the couple’s 29-year-old son, told Miller that he had the wrong room.

That’s when Miller allegedly began attacking him. The man’s father came to his son’s aid, and was also attacked by Miller.

Sources say the 70-year-old man was punched in the face and suffered broken bones.

Both father and son were transported to the hospital.

Miller fled, but was later apprehended and arrested.

According to jail records, Miller has been charged with assault with a deadly weapon (not a firearm), 2 counts of making criminal threats, and battery.

I thought the 49ers would release Miller last spring, seeing as they’ve dealt with more high-profile arrests than any other team in North American professional sports since 2012, but nope. They didn’t just stick with Miller, they allowed him to be a member of their “leadership council,” representing the tight ends. As a result of the 49ers’ trust in Miller, he was on the 49ers’ roster when he allegedly broke a senior citizen’s face. Miller better hope the man doesn’t suffer any medical setbacks in the hospital, or his already long list of charges could grow.

— Ahmad Brooks was accused of punching a Kentucky woman in the face in 2008 when he was with the Bengals. Cincinnati cut him that year, and after missing the 2008 season he signed with the 49ers. In the summer of 2013 he was involved in an altercation with a teammate.

The unidentified witness said Brooks was too intoxicated to drive home, so Divens drove. When they got to Brooks’ house about 2 a.m. on June 8, Brooks asked for his keys. Divens pretended to chuck them onto the grass and then started to hand them to him.

Police took a report but did not make any arrests. According to the court documents, a San Jose police sergeant called Divens three days after the incident asking if he still wanted to press charges.

Divens said he and Brooks were in touch and nearing a resolution. Two days later, Divens phoned the officer and told him he wanted to “drop it.”

“He said this would be bad for both of their careers and that he just wanted to keep playing and that they had resolved it,” according to the documents.

Fast forward a couple of years …

San Francisco 49ers linebacker Ahmad Brooks pleaded not guilty on Tuesday to a misdemeanor charge of molesting the same woman his former teammate, Ray McDonald, is accused of raping while she was unconscious.

The molestation case is still pending and somehow, Brooks is still on the team. Apparently the 49ers are waiting for one of these charges to stick.

Seven players, seven rookie seasons missed and five who haven’t played a single regular season snap. Stockpiling draft picks, only to use them on players who haven’t played in a game since tearing their anterior cruciate ligaments, is not a winning strategy. But that won’t stop Trent Baalke, who insisted Redmond would be ready to go in training camp. While Redmond was a camp participant, he clearly wasn’t fully healthy, but from Baalke’s pre-draft comments on his “Team ACL” strategy, he might have been targeting Redmond all along.

“I don’t know that’s something I’ll veer away from moving forward,” Baalke said less than two weeks before the draft. “We have 12 picks again and you’re not going to have 12 rookies, 12 draft picks, make your team. So will we look at it? If we feel the value’s right.”

“I don’t think you look at it and say that we’re going to change the way we think,” Baalke said. “I think you have to look at some of those of why we did it. When you have 12 and 13 picks, they’re not all going to make your roster. So to layer it and take a chance on a guy that’s very talented that has more of an upside than some of the other guys … There’s value. Has it always panned out? No. But you go into it knowing that they’re not all going to pan out.”

Most teams would see these errors and change their ways. Maybe prize coaching skill over personality, enact a true no-tolerance policy when players are accused of being violent off the field, and spend their draft capital on players with healthy knees from now on. But the 49ers aren’t like most teams.