If the 1997 season didn’t end disappointingly enough (Thanks, Devon!), a year later the Giants lost 5-3 at Wrigley Field in Game No. 163. The worst part about this game, other than the Giants’ 3-4-5 hitters (only Barry Bonds, Jeff Kent and Joe Carter) going 0-for-12?

Rod Beck earned his 51st save in this game. For the Cubs.

Beck was awful a year later, but letting him sign with the Cubs at age 29 after saving 199 games for the Giants is the exact opposite of the move you’d expect from the “please don’t leave, we still love you” Giants of today.

Here’s what I remember most from that game: calling my buddy Carp to commiserate from my UCSC dorm room I had moved into a couple of weeks prior. It was a standard “welp, that sucked, but this team wasn’t that great anyway” conversation, no different from several others we had before 2010. Then Sammy Sosa did a postgame interview on the field after taking off his jersey. The only thing either of us could talk about was how cartoonishly enormous Sosa was, and neither of us even thought to mention steroids. We were so innocent in our college days.

Some pitcher named Corey Black completely derailed the Giants’ season with a fastball that bore in on Pence and fractured his left forearm. Pence missed the first 36 games of the season due to the Spring Training injury, then went back on the disabled list in June with left wrist tendonitis. “The bone healed, but a callous that formed at the fracture site is causing the tendon irritation,” wrote Andrew Baggarly. Pence would miss another 30 games during that DL stint. Thanks, Corey! 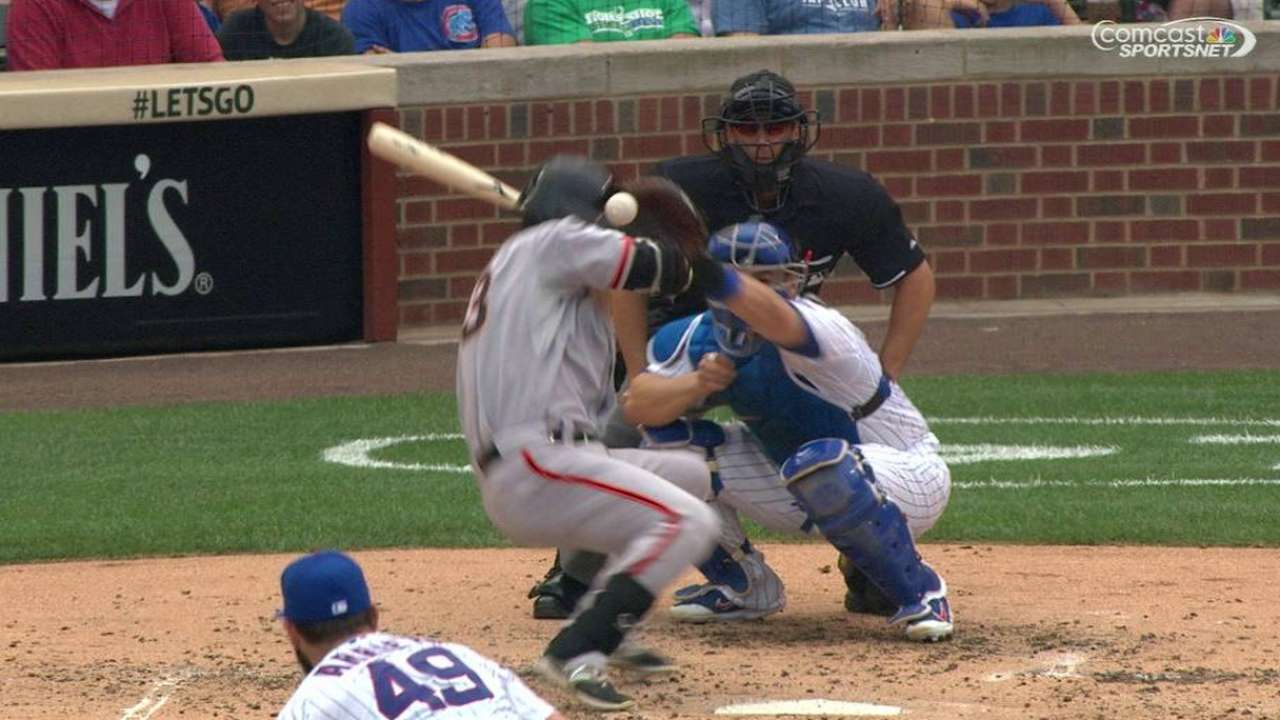 Arrieta has nasty stuff, and occasionally his pitches hit batters. Usually it seems accidental … although the Pirates would probably disagree after the Wild Card game.

Here’s what I wrote after the Giants got swept in that four-game series in Wrigley:

The series began on a terrible note, as Mike Leake was placed on the disabled list with a hamstring injury suffered during a conditioning drill. Today’s injury was more nauseating, as Jake Arrieta sent Nori Aoki to the clubhouse in the third inning with a 92 mph slider that bounced off the front of Aoki’s helmet.

The Giants announced that Aoki seemed to be doing OK (John Shea reported that he felt nauseous at first, then had a “little headache” after the game), but Brandon Belt started the same day Marco Scutaro’s throw hit him in the head last year in Miami, only to feel symptoms and miss the next several weeks.

Aoki missed one game, came back, got nauseated again, spent the next seven games on the concussion DL, played 13 more games, then missed every game from Sept. 3 on. Thanks, Jake!

Really, Cubs? Coming through and stealing away a Cuban player everyone thinks is decent?

A reporter for MLB.com who covers international signings reported the tentative deal almost as soon as Martinez and Giants agreed to it. The Giants believe that the Cubs, who have been aggressive in the international market, read the report and made a last-ditch effort to sign Martinez by offering $500,000 more.

Those familiar with the Cubs’ side dispute that, saying they had been in constant talks with the buscones long before the Giants thought they had a deal and did not leap into the fray at the last minute. It appears the buscones were happy to talk to the Cubs while the Giants were talking to the Beverly Hills Sports Council.

MLB said there was nothing wrong with this, and there probably wasn’t, but this of all the times the Giants have finished as runners-up for an international player, this one is definitely the shadiest. The Cubs clearly don’t want the Giants to have any outfielders. Maybe it’s payback for getting a good year out of Angel Pagan, who the Cubs traded to the Mets for nothing. (By the way, the Giants would be more than willing to send Pagan back to the Cubs this offseason.)

5. This last one isn’t really Giants-specific, but here goes …

In case you hadn’t heard before, the Cubs haven’t won a World Series since 1908. (It’s one of baseball’s most well-kept secrets, along with what’s known to insiders as an “unwritten rulebook” players and managers use to curtail emotion and dole out punishment.) Other than Wrigley Field, this is the only reason why the Cubs exist, to remind us that curses are indeed real and there’s always one team that will fall short regardless of talent, general managing acumen or financial supremacy.

If they lose, what happens? The Cleveland Indians — thanks to the White Sox, Red Sox and Giants winning championships in this millenium — become the new drought kings since they haven’t won a title since 1948.

Here’s what: if the Cubs win, every columnist in the country starts writing the same column trying to quantify Cleveland’s sports pain. The Browns have never won a Super Bowl. The Cavaliers have never won a title. Earnest Byner. Craig Ehlo. Jose Mesa. You think ESPN focuses too much on LeBron James and Johnny Manziel now? Just wait until we get years upon years of “CLEVELAND: THE MOST CURSED CITY IN AMERICA.”

Sure, the Mets ruined what should’ve been known as “The J.T. Snow Homer Game,” made Armando Benitez look good enough to tempt Brian Sabean, and stole the Giants’ old NY logo for their caps, but watching New York’s edition of the 2010 San Francisco Giants is still preferable to the Cubs winning. The Northsiders are only lovable until their little goat story vanishes and they become the new Red Sox. And since they took out two of their corner outfielders this season and used their legendary mulleted closer against them in 1998, there’s no reason why the Giants or their fans should shed a tear tonight.

10 offseason questions for the San Francisco Giants
Giants decline options on Aoki and Byrd, and that money probably won’t go to a top outfielder
To Top
wpDiscuz