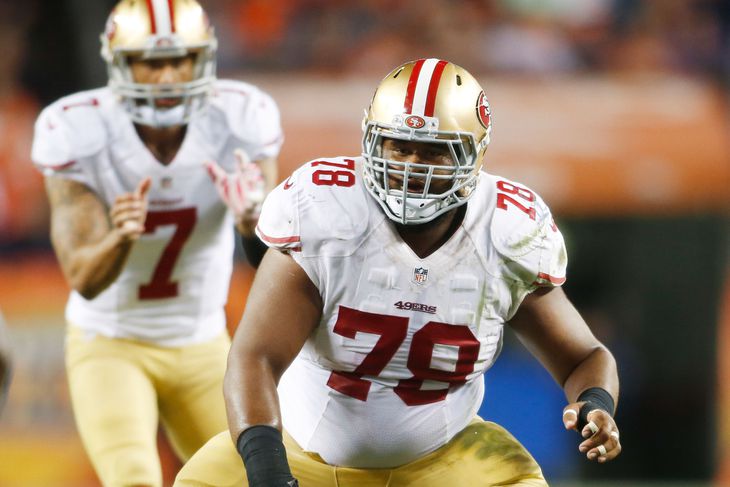 The 2014 San Francisco 49ers had a terrible offensive line. They allowed 52 sacks, third-most in the NFL. They were a better running team, but the numbers (4.6 yards per carry, good for fourth overall) were inflated by the season’s last two games, in which they carried the ball 73 times for 561 yards (7.7 ypc). Frank Gore was on a mission during those games, and Anthony Davis started at right tackle after missing Weeks 12 through 15.

The 2015 San Francisco 49ers will have a much different offensive line. No more Mike Iupati (which was expected), no more Davis (which was very weird), no more Jonathan Martin (praise the lawd!).

Out with the old, in with the new. Right? That’s the attitude the 49ers have had since December, and the folks who are wildly optimistic about this team’s chances are in lockstep. That’s what this 10-part series I’ve been working on sporadically is all about. The team has many unsure roster points, but those who scream that the squad is still talented are resting their hopes on several players, some young and some old, rising to the occasion in Jim Tomsula’s first full season as head coach.

As a collection of names, their current offensive line unit doesn’t sound half bad. A group including Joe Staley, Alex Boone, Brandon Thomas, Marcus Martin, Daniel Kilgore, Joe Looney, Erik Pears, Trent Brown and others has plenty of size and athleticism, along with a mix of experience and youth.

I haven’t been to a single offseason workout or practice, due to new family responsibilities this year. So I’m forced to rely on reports from the beat writers. According to those in attendance, the offense has looked … not good. Much of that has to do with the offensive line, which looked especially porous on day three of training camp, when Staley was given a day off.

How would a 49ers offensive line function without its best player, left tackle Joe Staley? The team got a glimpse of that scenario Monday when Staley was given a so-called vet’s day off. And the result was not pretty.

The team’s third full practice of training camp was marked by false starts, blown assignments, ineffective throws to check-down receivers and quarterbacks scrambling due to breakdowns.

And here’s a report from yesterday’s practice, courtesy of Matt Maiocco:

I believe my count was nine would-be sacks in 43 pass plays. The QBs rarely had enough time to set their feet and get to a second read.

Kilgore had surgery this summer on his left leg. He’s in a walking boot and it’s unknown whether he’ll be available for the start of the regular season. Since that’s only a month away, the 49ers are probably looking at Looney as the starting center for Week 1.

Staley blossomed as a left tackle after Mike Iupati came in and started mauling people, so that could be why the 49ers decided to move Boone from right to left guard. They also want Boone to get acclimated to the left side in case Staley gets injured and Boone needs to slide over to left tackle. The left side of the line should probably be fairly good, barring injury. But other three spots aren’t looking so fantastic.

Pears is a guy they can count on to play every snap, as he started 32 games over the last two seasons in Buffalo. But he’s not considered a great offensive lineman, or even a very good offensive lineman. He’s the 2015 version of Adam Snyder, in other words — he shows up and can play multiple positions, but that’s about it.

The 49ers need their vets — Staley, Boone and Pears  — to play as well as they have over the last couple of years, if not better (Boone has room for improvement after a rocky start to 2014). However, they’ll need a lot more. With Kilgore a question mark heading into the season, these three players must show more than they have up to this point for the 49ers to have any shot at moving the ball and keeping Colin Kaepernick upright.

He’s one of those guys who seems extremely nice in person, but in the past his teammates claimed he had a mean streak on the field. He hasn’t done a whole lot, however. Greg Roman called out Looney — a fourth round pick in 2012 (117th overall, the last player remaining from that disastrous draft) — after the team lost in Seattle.

“He had a tough game. There were some things there that fundamentally he could have done better. You know, first start as a center, in that environment, against that crew which is pretty good, that’s tough duty. But, I think he could have played better.”

That quote didn’t make Anthony Davis all that pleased with Roman, and Roman’s name is “mud” around here anyway. But the 49ers gave Looney several chances and he never seized an opportunity to become a mainstay. Unless Kilgore makes a very quick recovery, Looney will get one more shot in September.

A third-rounder in 2014 (70th overall), Martin started eight games last year at center. All things considered, he performed OK. He was good enough to play almost 200 more snaps than Looney, who had been with the team for two more years. And let’s face it, joining that mess of a line as a rookie couldn’t have been easy.

But no one will grade Martin on any sort of curve this year. Martin played center in college, but he’ll be expected to fill Boone’s former spot — right guard — and play like a veteran. He wasn’t all that great at opening running lanes or protecting Kaepernick last year, and he’ll probably be flanked on one side by Looney and on the other by Pears. That’s a little different than playing alongside Iupati and Boone (like he did last year), but the 49ers didn’t spend a third round pick on Martin for him to be the team’s sixth or seventh o-lineman. He needs to play, and play well.

Regular readers know my biggest Trent Baalke pet peeve: REDSHIRT PICKS. Thomas, a third-rounder (100th overall), is an example of a guy who was supposed to step in after sitting out his rookie season due to a torn ACL (suffered before the 2014 NFL Draft during an April workout with the Saints).

Thomas was given a shot in May to show what he could do at left guard. The 49ers have scrapped those plans for the time being. Bad sign.

Maiocco was asked by a reader which players have impressed him the most and least. Here’s what he said:

Shareece Wright and Eli Harold have looked good, and I think Brandon Thomas looks pretty stiff as he tries to come back from missing a year with that knee injury.

Thomas is the quintessential Baalke selection, a guy who graded out as a second or third round pick who Baalke might have been able to grab in the fourth or fifth round. Baalke is still looking for a redshirt success story. Marcus Lattimore retired. Tank Carradine and Quinton Dial have a chance to prove Baalke’s strategy right this year if they become key players on the team’s defensive line. Keith Reaser and Trey Millard will look to make the roster after missing 2014. Thomas’ roster spot is probably safe, given his draft position and the team’s needs at offensive line, but they went into this summer thinking he’d give them more than he has so far.

What makes an offensive line thrive? Health obviously helps, but continuity is huge. The 49ers know they won’t have the latter, since they’ll go into this season with different starters at four of the five positions compared to Week 1 last year. They also have a new offensive line coach, as Mike Solari was replaced by Chris Foerster (who returns to the 49ers after coaching the team’s o-line in 2008-09).

Perhaps some of the poor performances the beat reporters have seen from the offense (and the o-line in particular) will get ironed out as the players develop chemistry and get accustomed to new schemes. Foerster is known as a guy who’s “adept in a zone blocking system,” which is different from the power setup the 49ers had throughout Roman’s tenure. According to Barrows, the 49ers won’t abandon the power concepts completely, and Staley said he expects the team to “implement all styles.”

The concepts will affect how the offense performs, but it takes players to make them work. For a team with so many questions on their offensive line, Looney, Martin and Thomas need to provide some answers. And that’s why they’re the fifth, sixth and seventh players I’m listing as keys to the 2015 season, when the optimists (“They’re still talented!”) and the doubters (“Where’d everybody go?”) will finally find out who was right all along.