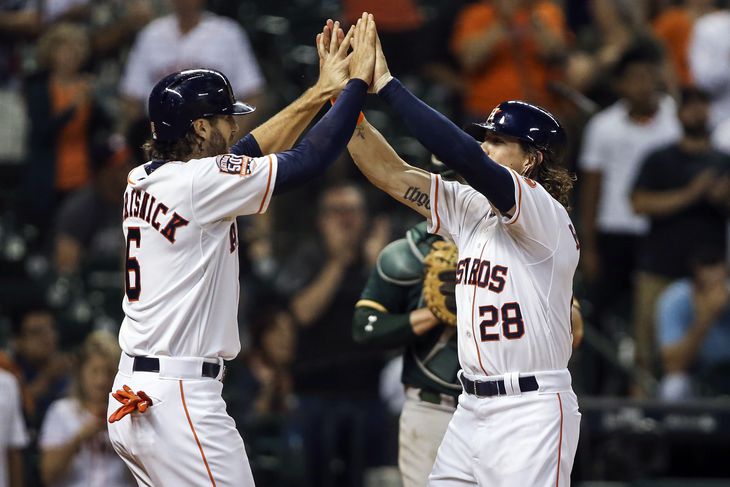 Are the A’s really this bad? Yes. Sorry, but they stink.

Are the Astros really this good? No. But I wanted to take a closer look at Houston because they certainly are off to a flying start.

In the last days of the 2014 season, the Astros came to the Coliseum for a weekend series vs. the A’s. As I was prepping for the Dugout Show for 95.7 FM, Houston General Manager Jeff Luhnow came into my booth. The way it works, the day-of-game host for the pre and post-game shows sit in the visiting GM’s booth. The agreement is that we have to be out of there 30 minutes prior to first pitch, which works out fine because that’s when the network pre-game show begins and we have finished our part. Sometimes GMs don’t use the booth at all, and other times the GM almost has to be pulled out after the game (Dave Dombrowski). It can be a bit tenuous at times, and I’m sure the visiting GMs think it a pretty ghetto setup.

So when Luhnow popped into my booth, he asked if he could quietly get some work done in there and promised not to make any noise. I was more than happy to agree, but since we were both so early (it was about two hours before first pitch), we started making small talk. Luhnow is a very affable and approachable guy. A former entrepreneur, Luhnow had zero baseball experience before revamping the Cardinals farm system beginning in 2003. Having been raised in Mexico City, he is fluent in Spanish and created a Cardinals baseball academy in the Dominican Republic. He personally helped to beef up St. Louis’ scouting in Venezuela. By the time he was in full control of the Cardinals’ drafts, he produced 24 major leaguers in his first three years. The Cardinals had the best overall record of any minor league system in baseball in 2010, and most importantly, the big club won the World Series in 2011. Luhnow was snatched away by Houston less than two months later.

Luhnow knew he had to be patient when rebuilding the Astros. Jose Altuve was a guy he could build around, along with catcher Jason Castro. He still spent money on players like Carlos Pena and Scott Feldman, but for the most part, it was going to be a long slog. It all seemed to be going rather well in Houston, if you took a look at the grand scheme of things. Yes, they were piling up losses on the field, but with high picks rapidly maturing into future stars, even Sports Illustrated did a cover story last June proclaiming Houston as the “2017 World Champs.” They had a fiery young skipper in Bo Porter, a savvy new GM, and a boatload of young talent.

But thing started to go pear-shaped right after the SI article came out. The number one overall draft pick, high school pitcher Brady Aiken, was selected by Luhnow but never signed. After an exam by Houston’s doctors, they found Aiken’s pitching arm had red flags. The signing bonus was lowered, the player went to indie ball, and now the Astros will have an additional first round pick next month.

Their first pick from the previous draft, Stanford pitcher Mark Appel, was being shelled in A-ball but got promoted to AA anyway. He was an investment and couldn’t pay dividends where he was. It was a risky proposition.

Then Luhnow made a trade which had what was left of the Astros fan base up in arms. Jarred Cosart, a young pitcher who looked to be a future rotation member for years to come, was shipped to Miami for outfielder Jake Marisnick and two prospects. Marisnick was hitting .178 for the Marlins at the time.

Then Luhnow fired Porter before the season was over. It looked then like perhaps Houston and Luhnow might not have been a terrific match after all. That day in the press box, Luhnow asked me about Chip Hale, and if I thought he’d make a good manager (I said yes). He also talked about when he worked in Emeryville and would come to A’s games all the time. It was then that I final figured out (duh) that I should have him be my guest on the pre-game show that day. I asked and he obliged, so I hooked up an extra mic, and had my producer cancel my original guest (a Houston beat writer). I politely brought up all the points I’ve already made here in a respectful manner and he deftly answered each one with aplomb. But the jury was still out on which direction the Astros were taking.

How have things turned out so far with these crises?

So far Luhnow has come out of all this smelling like a rose. It’s still only May, but with Carlos Correa being promoted to AAA-Fresno this week, along with an outstanding big league debut by starting pitcher Lance McCullers, Jr, it’s happy times at Minute Maid Park right now.