Draymond Green picked up a flagrant foul last night, for kicking James Harden in the head. Seems kind of self-explanatory when you put it that way, right? In fact, most people who didn’t see the game and read the first sentence of this paragraph would ask why he wasn’t ejected from last night’s double-overtime loss to the Rockets once his foot made contact with Harden’s noggin.

Green is up in the air, making contact with Harden while looking up at the basket. Harden’s body moves down and to the left, possibly due to contact made by Green, who after the game complained about this:

The flailing, despite showing an incredible level of flexibility for any player (let alone one as naturally strong as Green), is a clear and noted “point of emphasis” for the NBA. That’s on Green (and mostly because of Green), who flailed one too many times in the Western Conference Finals series against Steven Adams and the Thunder.

However, based on some of the responses we’re seeing from fans and writers, a little perspective is needed.

Green didn’t start the play — a really important play, at that — hoping to ultimately kick Harden in the face. It’s one thing to throw a no-look pass to a teammate you know will be filling the lane while taking a certain, predictable path. It’s quite another to go up and try to shoot over someone while they’re fouling you — Harden was making contact with the right wrist of Green — and direct your foot toward a moving target while gravity does its job.

While the easy solution would be for Green to just knock it off and keep his body from turning perpendicular when he’s in the air and in traffic, it’s not like this method of clearing one’s personal space or drawing fouls is new. 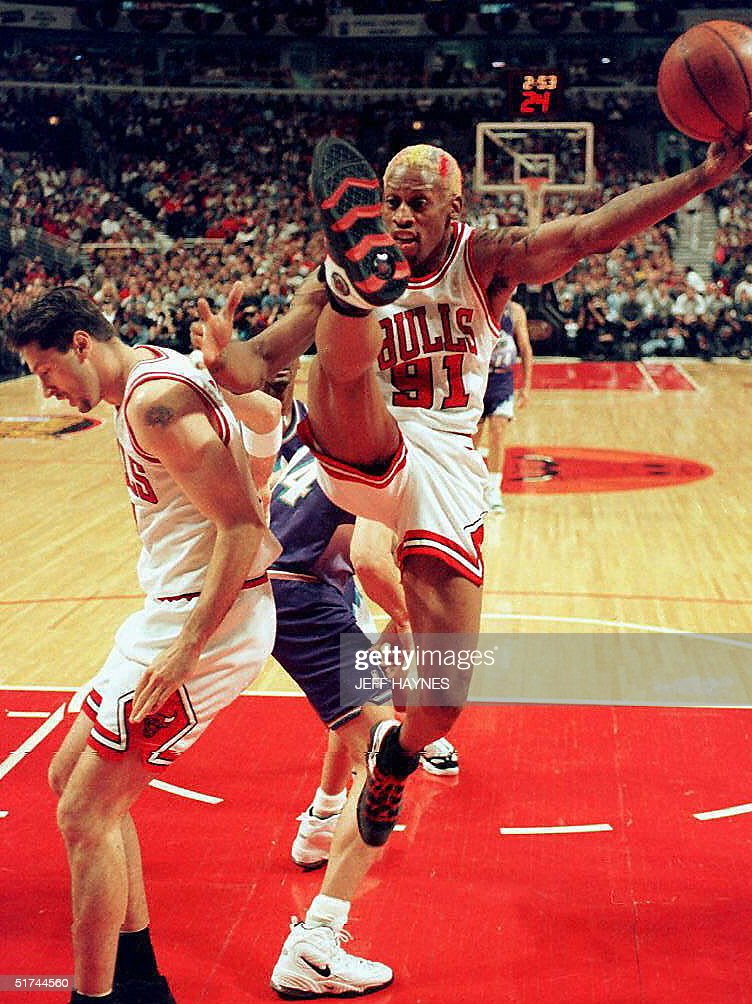 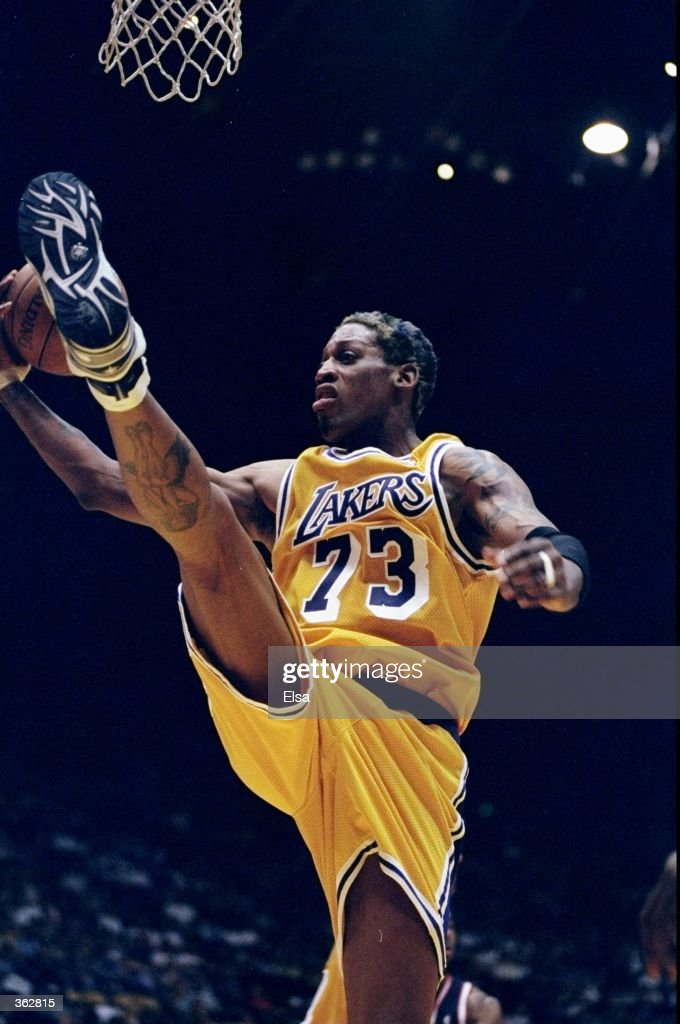 And those are just the photos of Dennis Rodman that are available online.

Of all the things for which Rodman was known or vilified, his leg kick doesn’t rank on the list. (However, Green seems to get in trouble with his wayward feet when he’s making a move to the basket, although he’s been known to pull some Rodman-esque acrobatics on rebounds as well.)

Green doesn’t dye his hair and he doesn’t consider his body a canvas for tattoo artists, but he and Rodman show some similarities: size, defense, rebounding, and a desire/need to push boundaries. But even though Rodman committed more hard fouls in a standard season than Green has in his career, fans preferred to focus on what The Worm did off the court. It’s not hard to determine why. Rodman was thought of as a villainous sort of player to a certain extent, but his style of physical play was considered almost normal in the 1980s and ’90s because so many other players were just as mean or “competitive,” if not more so. His hair dye choices, fashion statements and sexual ambiguity were far more rare.

Rodman played a cleaner style of ball than several Bad Boy teammates (although his game got a lot dirtier after he left the Pistons). There were villains outside of Detroit as well, and players who were considered dirty have always been a part of the league. Looking back at the last 30 years, the list is ridiculously long: Xavier McDaniel, Charles Oakley, Kenyon Martin, Reggie Miller (speaking of kick-outs), Danny Ainge, Kobe Bryant, John Stockton, Reggie Evans, Bill Laimbeer, Kevin Garnett, and that’s just scratching the surface.

The list also includes Charles Barkley, who last night idiotically said he didn’t like the Warriors’ brand of “girly basketball.” The fact that Barkley would resort to sexist insults to describe a team that features Green, a player who resembles the Chuckster in so many ways, shows he probably doesn’t watch as much NBA hoops as one would expect from a paid analyst, but that’s another story.

This is about Green, and I agree with his stance after last night’s game.

Again, Green should have seen this coming, and probably did. The officials set the tone in Game 1 of this season, when he yelled after scoring against San Antonio and was whistled for a decidedly lame technical foul.

His flagrant last night didn’t help Golden State’s cause in double-OT, and one could argue that his actions throughout the 2016 NBA Playoffs negated all of the good he did. It’s not crazy to suggest he should compromise a little bit here, and the Warriors probably wish they could get all of his fire and production with fewer whistles that count toward the NBA’s punitive point system.

But we saw this last night — every time he does anything, there’s a huge outcry. A little too huge. Too tattle-tale-y, with a tone a little too close to “lock him up.” That’s partly due to social media being such a fantastic hub for people who want to point at and gang up on others, but it’s also because the dirty players, by and large, have retired.

The L.A. Times conducted a poll of 24 coaches, assistants and players less than a year ago.

The 24 people who spoke anonymously — some of them voted for more than one player — listed their top five dirtiest players:

Green didn’t even get a mention, and I don’t know how you have a poll like this without a mention of Patrick Beverley. However, the survey was before the playoffs and probably didn’t include enough participants. Either way, the end of the L.A. Times’ story pretty much said it all.

The old-school coaches actually laugh at the idea that players are dirty these days. They said the NBA has cleaned up that sort of play.

“I don’t think there are any dirty players anymore,” a West coach said. “Back in the ’80s and ’90s, you could cheap-shot guys. But now it’s a fine, it’s a suspension, it’s a points system. There’s no enforcer like there used to be. Who’s an enforcer like Charles Oakley? There’s no enforcer because of the rules. How much can a little guard get under your skin? And Dellavedova is a backup. He ain’t dirty. None of these guys are dirty.”

Is there another star in the NBA who does anything close to be considered “dirty,” other than Green? Maybe that’s why Green — the only player of the Warriors that isn’t close to angelic, now that Bogut is gone — faces this kind of backlash for plays that weren’t all that crazy in previous decades. And it could be part of the reason why Bryant took such a liking to Green last year, texting him regularly and calling him “a rare breed in this day and age.”

Legs fly up naturally all the time. A blanket rule anytime there’s contact involving a foot is not warranted pic.twitter.com/FwPhRIKfxB

Yep. Like most dumb sports controversies, this one needs to die a quick death. But it won’t, because the league, its officials, and the fans have decided that Green is the league’s preeminent villain. The most important one, anyway.