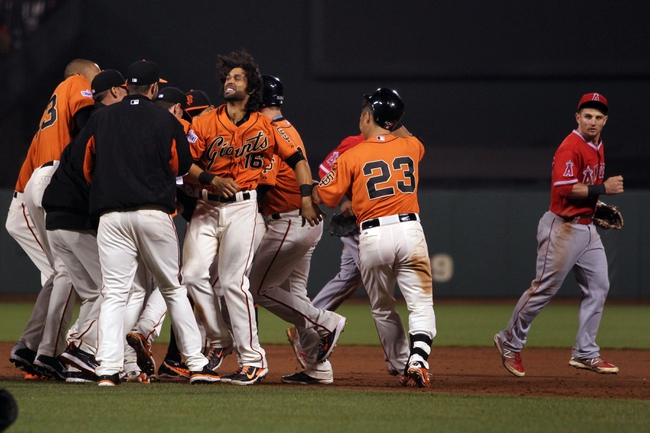 Things could be much, much worse for the San Francisco Giants.

And after all that, they’re 14-14 and just 3.5 games out of first place. The rotation was once in crisis mode, and now it seems passable at the very least, and until Chris Heston’s outing yesterday it looked like they might go the rest of the season without allowing a run. Hey, you never know.

The Giants aren’t thriving, but they’re doing a great job treading water considering how poorly they played after their season-opening series in Phoenix. What — or, more accurately, who — has kept them afloat?

Brandon Crawford is leading the team in home runs, RBIs, walks, slugging, OPS, OPS+, wRC+ and WAR (Baseball-Reference and Fangraphs), and he’s the team’s best defender. Maybe this is the year that he performs up to Brian Sabean’s expectations and makes the All-Star team.

Joe Panik has already doubled his home run total for last year (maybe that’s an answer to my question from before the season), ended two games with walk-offs, and he’s great against right-handed pitching. I believe he should be given the chance to figure out left-handers and play every day, instead of serving as the half of a platoon partnership that plays against right-handed starters, but Bochy Knows Best™.

Crawford and Panik also happen to be the smoothest double-play combo the Giants have had since … Royce Clayton and Robby Thompson? That sounds about right.

Here’s a way of showing why I haven’t written as much about the Giants lately as I usually do — Angel Pagan is the Giants’ version of Andrew Bogut. The Giants’ center (fielder) is undeniably talented, grouchy at times, and injury-prone.

Even though batting average doesn’t matter anymore, it’s pretty amazing to see “.340” next to the No. 3 spot. So maybe — also like Bogut — Pagan is trying to show that he’s tougher than people think. His finger was squirting blood all over his jersey after that Padres’ jerko stepped on it the other night (OK, OK, inadvertently), but Pagan remained in the game. He was a late scratch after batting practice on Tuesday night, but returned yesterday after his first missed game of the season. We’ll see what happens when Hunter Pence comes back, but so far Pagan has looked like he did in 2012 from a durability standpoint. Yeah, yeah, it’s early …

I didn’t get a chance to watch Tim Lincecum’s latest start until after I got home from Game 1 of the Warriors-Grizzlies series, but eight scoreless innings wasn’t what I was expecting in any of his outings this year. I know it’s sacrilege, but I figured the reconnection with his dad was just fodder for Spring Training fluff pieces. Turns out he’s had a pretty danged good first month.

4. The emergency No. 2 starter

Two of Chris Heston’s last three starts have been bad, but at least he went at least five innings in each one. Since he wasn’t even talked about as a potential starter as late as mid-March, the Giants can’t complain about an emergency addition who’s averaging over six innings per start (37.1 innings in six starts).

5. The guy who only looks illegal

I was tempted to include the entire bullpen, but one could’ve probably assumed before the season started that they’d be one of the team’s strengths, due to experience and depth. But this Sergio Romo situation has fooled me on two counts. First, I thought the World Series parade was the last we’d see of him. I didn’t know if he’d sign with the Dodgers, like his dad seemed to be asking for in those luxury car commercials from last year, but I didn’t think there was any way he was coming back.

Not only did he return (and say all the right things about not wanting to be anywhere else after re-signing), but Romo is striking guys out a a ridiculous rate. Try 15 strikeouts in nine innings, which by my calculations means he’s striking out 15 guys per nine innings!

Honorable mention: Nori Aoki, who I figured would be good, but not THIS good; Justin Maxwell, who held down the fort OK for a bit before coming back to earth; the entire bullpen (mentioned earlier).

Panik walks off the Angels, plus a goodbye letter from Ruthless Sports Guy
Hey, Tim Lincecum is interesting again
To Top
wpDiscuz