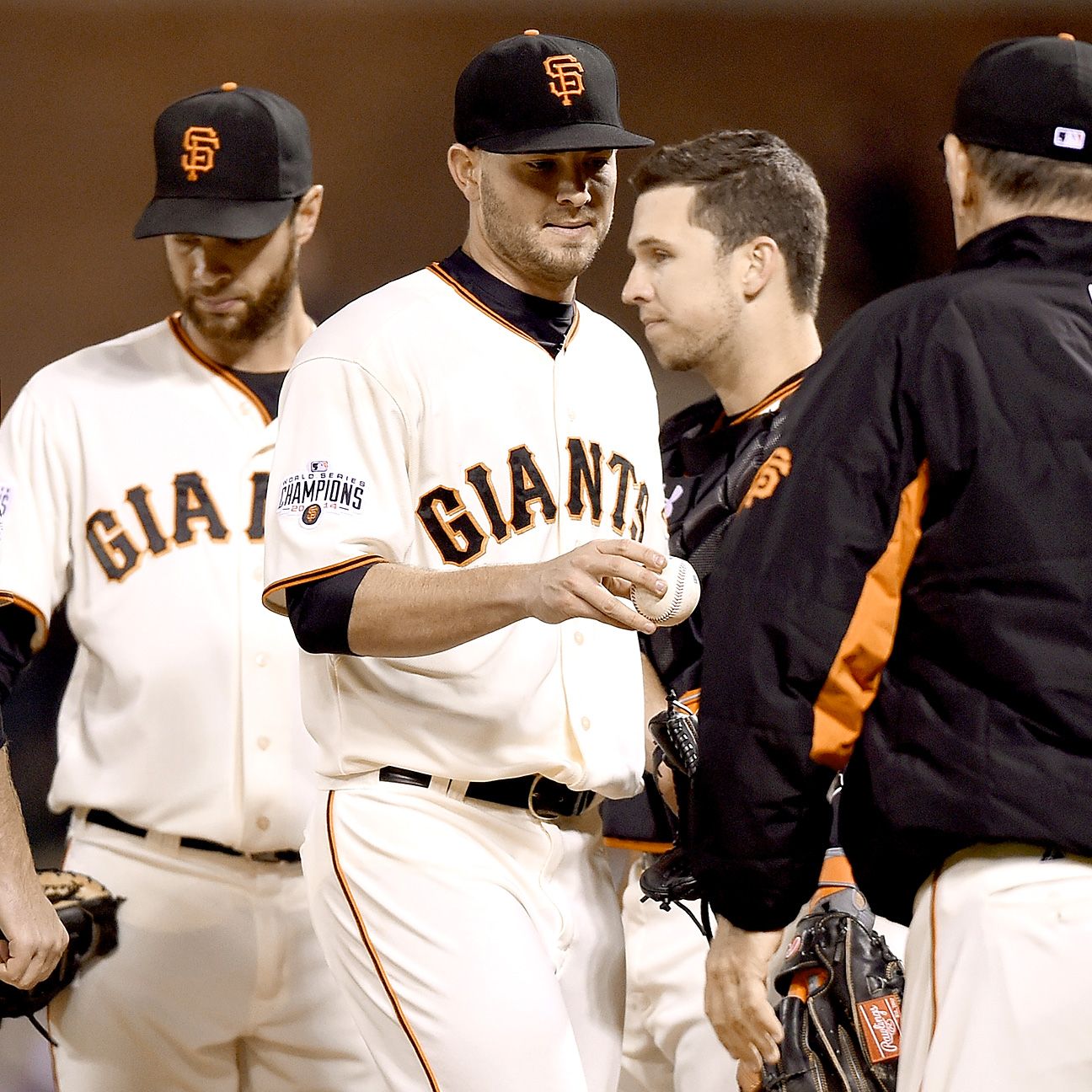 Bruce Bochy sent Yusmeiro Petit to the bullpen as the fourth inning started — not a good sign for Chris Heston. Then Petit came in with two outs in the fourth and surrendered a base hit to score Andrew McCutcheon, whose triple knocked Heston out of the game.

A four-game losing streak does not a crisis make, but Bochy looked annoyed on several occasions during Tuesday’s 7-4 loss, yet another game where an early 2-0 lead evaporated.

Ryan Vogelsong was awful in April and amazing in May, so who knows what the month of Swoon might hold. Tim Lincecum has allowed eight earned runs in his last 9.1 innings. Tim Hudson turns 40 next month and has an ERA close to 5.00. Heston’s leash is getting awfully short, as we saw on Tuesday night.

The Giants won their championships with their pitchers leading the way, and they’ve put together a lineup that’s been surprisingly productive over the last month and a half. So it’s pretty clear where they’ll look to improve this summer. But how?

— The easy answer would be to promote Jake Peavy, but he got lit up against Nashville (nine hits and six earned runs in 4.2 innings) in his first start with the River Cats after an excellent first rehab outing with the San Jose Giants, then he experienced back tightness.

— Matt Cain is pitching three innings of “extended Spring Training” in Arizona today (Wednesday), so we’ll see how that goes. I assumed Cain wouldn’t pitch in 2015 from the moment he was shelved due to forearm tightness, but he has successfully avoided a surgical end to his season thus far.

— Kyle Crick’s ERA is 1.78 in Richmond, but he’s averaging 6.6 walks per nine innings and less than five innings per start.

— Tyler Beede was just promoted from San Jose to Richmond, but the Giants drafted him out of Vanderbilt less than a year ago. He’s a possible fast-track candidate if he does amazingly well with the Flying Squirrels, but the Giants aren’t going to rush a first round pick unless he’s Lincecum-esque.

So unless the Giants get lucky with Cain, Peavy or one of the minor leaguers, we’re probably looking at a team that’ll be in the market for a starter in late-July. Oh, who am I kidding — they’re already looking at options.

They have six relievers who are on pace for over 70 appearances this season. Jean Machi led the 2014 Giants in appearances with 71, with Javier Lopez finishing second on the team with 65. George Kontos is on pace to appear in 78 games this season.

The bullpen is getting taxed to a ridiculous extent, and Bochy sent Petit out to warm up before Heston threw a single pitch in the fourth inning. They’ve signed reclamation projects like Tommy Hanson and Ricky Romero in recent weeks, but they’ll need to make a more serious move in the next month or two unless either Cain or Peavy get healthy (and good) very soon.

Kids don’t like baseball, huh? Could’ve fooled me yesterday …
Giants draft next Tim Lincecum in first round (maybe … in a sense)
To Top
wpDiscuz