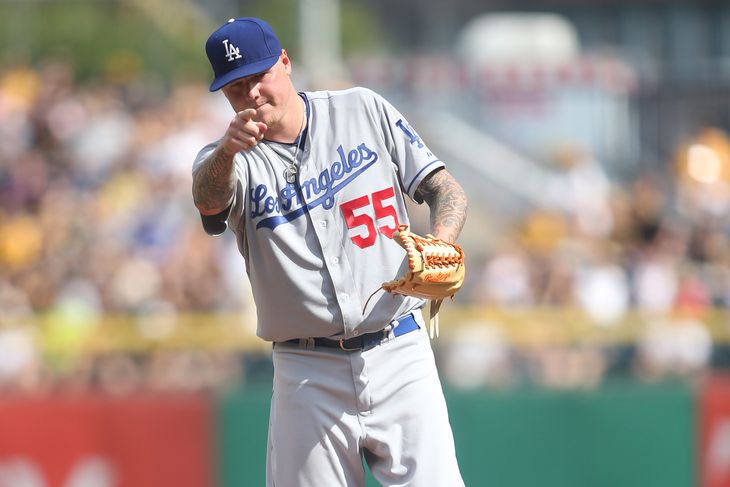 After Yunel Escobar lined Ryan Vogelsong’s first pitch over the left field wall, the Giants played their game against the Nationals. They pitched, striking out 14 while allowing just four more hits after Escobar celebrated his leadoff blast. Other than a Kelby Tomlinson no-throw in the first inning, they played solid defense. And while the offense wasn’t flashy, the Giants hit enough run-scoring singles (three) to take the first game of this enormous series.

Their hard work paid off, as the Dodgers lost 10-3 at home to the Reds. Mat Latos gave up five runs (four earned) against one of his former teams while lasting just 4 2/3 innings. Latos may be a villain around here, but he can’t be getting much love in L.A.

In fact, the Dodgers’ trade deadline acquisitions have all been bad so far.

Supposedly Ned Colletti was that franchise’s anchor, and Andrew Friedman and Farhan Zaidi were the geniuses who’d pull the Dodgers out of the dark ages. However, the list of pitchers above indicates that sometimes you can over-think things. The prices may have seemed exorbitant, but going after David Price or — better yet — a Johnny Cueto/Aroldis Chapman combo, seem like much smarter moves. (I know, I know, “small sample size.”)

So, the Giants are 2.5 games back of the Dodgers. The Cubs won again, but why worry about the Wild Card when the NL West is there for the taking? That’s like haggling with a shady dealer for a good price on a used Kia when your parents are offering you their Mercedes for free because “we want to downsize our lives.”

It’s all Dodgers, all the time from here on out, unless the Dodgers go on the same tear the Cubs are currently on, and the Cubs suddenly realize they’re the Cubs and take a step or eight backward between now and the end of September.

— I had a little fun after the third base coach decided to send his lead-footed catcher … even though the catcher rounded third at the same moment Washington’s carefully-coiffed superstar right fielder fielded Hunter Pence’s single.

Kelly has had his struggles throughout the season, although he’s been better lately than he was in April (when he was getting in the way of baserunners). A lot of fans were calling for Tim Flannery after Posey was tagged out at home plate, but Flannery struggled a bit with Posey-related decisions in October.

Third-base coach Tim Flannery, proud of his aggressive approach sending runners home, said Wednesday he might have to treat Buster Posey more conservatively after the catcher was thrown out at home for the third time in the postseason in Game 1.

“I’m probably going to have to hold him,” Flannery said. At the same time, he said, “If people want me to hold everybody, we have to keep hitting. It works both ways. They held a guy at third with nobody out and he didn’t score.”

— How utterly screwed would the Giants be without Vogelsong, who struck out eight over five innings? The Giants needed two different starters at the beginning of the season, and they tabbed Vogelsong and Chris Heston. After those two, their only option was Yusmeiro Petit. At that time, Petit was seen as a long man (the position he’s held all year) and Vogelsong wasn’t trustworthy in relief.

Then Vogelsong was moved to the bullpen when Jake Peavy and Matt Cain returned, and he showed flashes of being able to handle a high-leverage role. When Mike Leake went on the DL, suddenly they needed Vogelsong for the rotation again. He’s a glue guy on this roster, but if things with the Astros didn’t fall through for whatever reason, who would’ve pitched all of Vogelsong’s innings (110 2/3 so far) in so many different situations (18 starts, 8 relief appearances) for the Giants?

— The bullpen looked well-rested tonight. Hunter Strickland lowered his ERA to 1.57 with two scoreless innings. Sergio Romo traveled back to 2012, grabbed the slider he left there, and unleashed it tonight. Santiago Casilla threw a fat pitch that got whacked for a double by Michael Taylor, but otherwise he was just fine.

— Strickland still hasn’t faced Harper, though. That has to happen at least once in this four-game series, right?

— Matt Duffy’s first inning single to right to knock in Gregor Blanco was so fundamentally sound, it’s almost like Duffy was created in a lab by a group of the nation’s leading dad scientists. If he starts bunting more, it’ll be time to get suspicious.