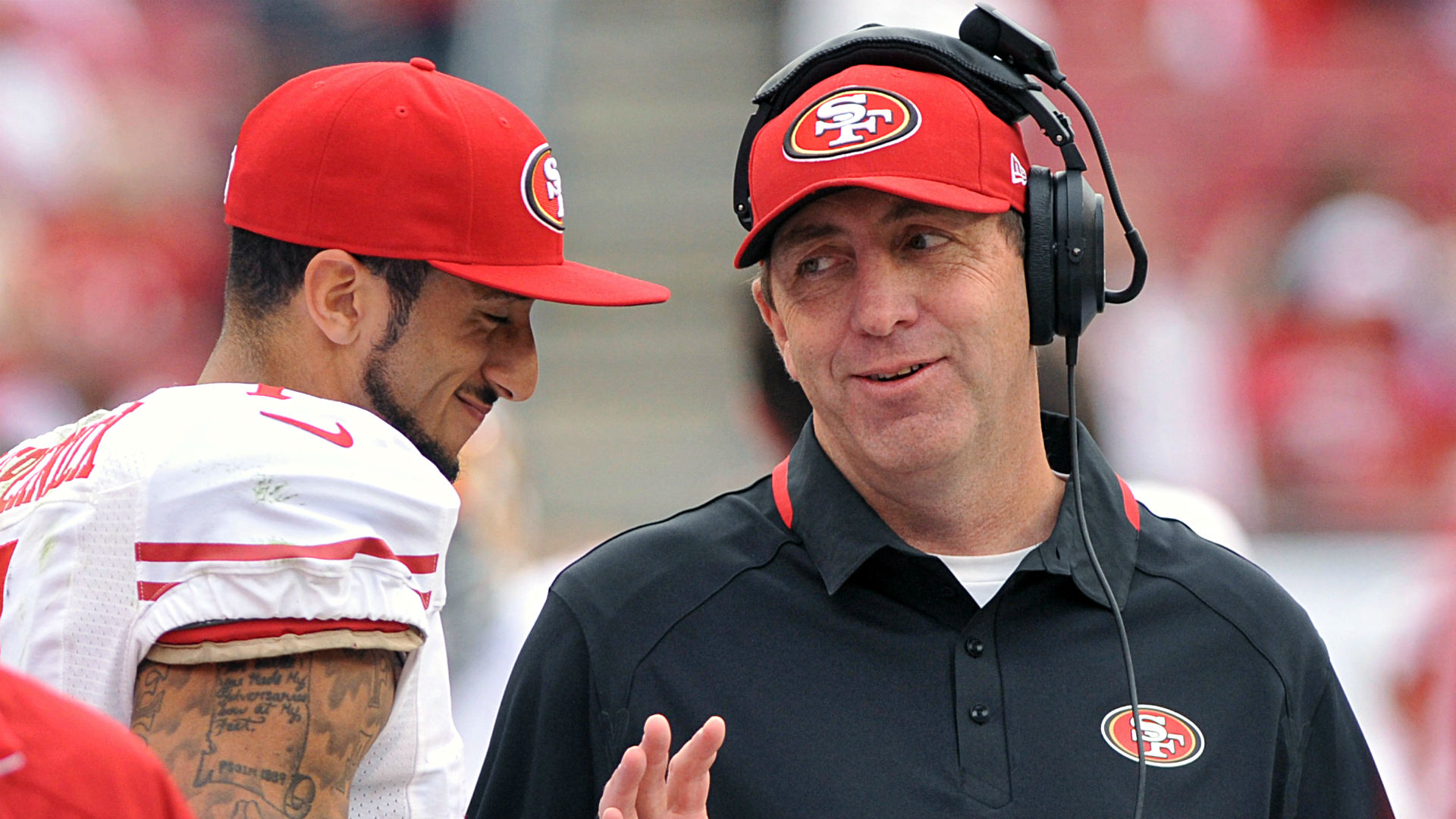 It’s Thursday, and Geep Chryst is still the offensive coordinator for an NFL team. And not just any NFL team, either. His team ranks at or near the bottom in almost every offensive category or advanced stat.

* If we take away six points for Jimmie Ward’s pick-six last week, the 49ers average an even 14 points per game on offense.

The one team currently below the 49ers in PFF’s and FO’s calculations is the Rams, who fired offensive coordinator Frank Cignetti and replaced him with Rob Boras after losing 27-3 to the Cardinals in Week 13. They are one of four teams to fire offensive coordinators this season.

Colts: replaced Pep Hamilton with Rob Chudzinski after losing 29-26 to Carolina in Week 8

Dolphins: replaced Bill Lazor with Zac Taylor after losing 38-20 to the Jets in Week 12

After they lost 27-6 in St. Louis, I wrote that this may be the worst offense in 49ers history. In actuality, it’ll probably be considered the second-worst. The 2015 squad is on pace to score 231 points. No other 49ers team that played a 16-game season has scored fewer than 259 except the awful, Jim Hostler-coordinated 2007 49ers, who finished last in the league in both points (219) and yards (237.3 yards per game) with Trent Dilfer taking more snaps than any other quarterback on the roster. Hostler lasted just one season after replacing Norv Turner.

One would assume Chryst’s tenure as the 49ers’ play-caller will be just as short, as this year’s numbers are worse than the Chargers’ stats when he was in the same role in San Diego. The Chargers finished 28th in points and 26th in yards in 1999, then in 2000 they flip-flopped (26th in points, 28th in yards). But it’s remarkable that Chryst is still the offensive coordinator today, unless the front office and Jim Tomsula actually want an offense with vanilla route concepts and predictable gameplans.

(Standard Chryst series: run off left tackle by Shaun Draughn on first down, inaccurately thrown intermediate pass by Blaine Gabbert on second down, checkdown throw to Draughn or a tight end a few yards short of the sticks on third down, here comes the punt team.)

And there are other signs pointing to a Chryst departure relatively soon. If what NFL.com’s Albert Breer has reported several times is true, it doesn’t really makes sense for the 49ers to keep Chryst around now that Colin Kaepernick isn’t around, especially considering how Chryst’s offense has averaged a paltry 14.4 points and 300.8 yards per game with Blaine Gabbert starting.

According to two sources, Geep Chryst is expected to be named 49ers offensive coordinator.

This move was applauded by almost no one, according to Bleacher Report’s Jason Cole.

“It’s not going to be (Mike) Shanahan. He’s not going to do that. Geep Chryst? I’m lost on this one. I really don’t know what they’re going to do at this point,” said Cole, who went on to explain why the team might be experiencing so much difficulties in filling its staff.

“If you’re only paying Tomsula three (million dollars), that gives you an indication of where you are in paying assistants. And I heard this before they hired Tomsula, that they’re going on the cheap on the assistant coaching staff,” said Cole, who was on top of the Jim Harbaugh-to-Michigan story several hours before it was confirmed by CSN Bay Area’s Dave Feldman.

“They don’t believe in paying coaches right now. The word around the league in talking to people who are both coaches and who represent coaches, San Francisco is not the place to go to make money.”

“In talking to three players, including two guys on offense, basically they were dismayed by this hiring and were disgusted in certain ways because they believe that this is a sign that management has chosen to go incredibly cheap in terms of replacing the coaches that left.”

Well, no one except Colin Kaepernick (according to Breer).

On Colin Kaepernick: 1 reason Niners hired Geep Chryst as OC is bc Kap went to bat for him. Would be bizarre to blow him out a month later.

One fascinating angle on the Colin Kaepernick benching: A major reason the Niners went with Geep Chryst as OC was his relationship with Kap.

I still find it surprising that Chryst has the job six weeks after this exchange with reporters.

Q: Head coach Jim Tomsula has gotten up after practically every loss and said, “Blame me, it’s my fault.” I won’t be impolite and rattle off numbers, but the offense has not been good.

Q: How much responsibility do you bear?

Chryst: “You feel like you bear it every call that you make. You feel that you bear it every practice that you do. And, you know, you try to get under the hood and say, ‘OK. What is it that we’re failing on?’ And at the same time, as a coach, you know that the hand that you’re dealt.”

That “hand” was “dealt” by Trent Baalke and Paraag Marathe. Maybe Chryst later explained to the execs that he meant that comment more as a shot at Kaepernick. However, one day after Chryst semi-complained about the roster, Breer wrote this:

2) Niners in flux. The residue of the offseason transition in San Francisco is hanging around like chewed-up gum stuck to the bottom of your shoe. And this week, the quarterback switch has led to old stories involving Jim Harbaugh’s staff being reprised. As multiple sources recounted it, Geep Chryst, now the team’s offensive coordinator, was often on shaky ground as Harbaugh’s quarterbacks coach. In fact, on two occasions, the Niners were close to reassigning to him to another position. What saved Chryst? As it turns out, the quarterback he just benched. Colin Kaepernick, according to those who were there, went to bat for Chryst to stick as his position coach, and Harbaugh and Co. listened, in the name of keeping the quarterback happy. One source says that Kaepernick “begged” Harbaugh not to move Chryst. Then, when the Niners were having trouble finding a coordinator to replace Greg Roman on Jim Tomsula’s staff, Kaepernick’s affection for Chryst played into the decision to promote him. The underlying theme here: The Niners’ actions over the last couple years indicate that they were, indeed, all in on trying to get Kap turned around. You can, of course, temper by citing the trap doors — one of which they could well use in March — built into Kaepernick’s contract. But there’s little question that Tomsula, and even more so GM Trent Baalke, wanted to find a way to get Kaepernick right. This week’s events are a pretty good indication of how much of a struggle it’s been to pull that off. And of how wayward things have been over the last year-and-a-half or so in Santa Clara.

None of this sounds very complimentary to Chryst, and what Breer reported wasn’t exactly secret info either. The 49ers’ own website ran a story describing how Kaepernick endorsed Chryst about a week after he was promoted to OC.

I just don’t get the holdup. If the 49ers want us to believe they kept “Kap’s guy” in late-January, and he’s running the worst offense in football, why haven’t they promoted Tony Sparano or Steve Logan? Is it because that would mean either Sparano or Logan would have two jobs, or because they don’t want to hire another coach for three meaningless games? Everything about this, from Chryst’s promotion to their decision to keep him this long, makes very little sense. Then again, we’re talking about the 2015 San Francisco 49ers.