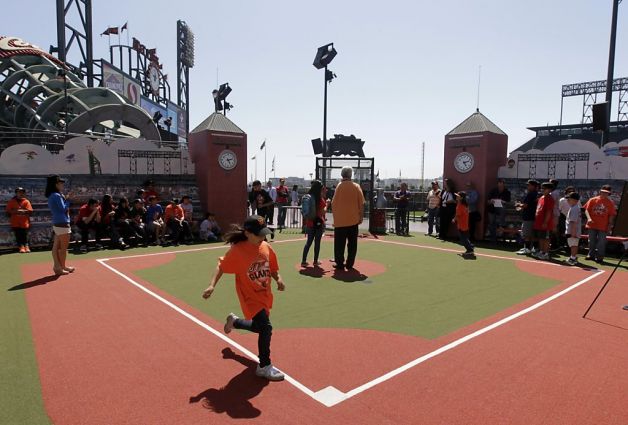 Ask anyone, from a baseball fan to a sports business reporter, why kids aren’t watching baseball like they used to, and you’ll get a wide range of answers. Playing youth baseball can be expensive, at least relative to other sports. Baseball is too slow. Major League Baseball doesn’t market their stars well enough. Baseball’s “unwritten rules” make the game seem stodgy and not as cool as sports where self expression is encouraged.

So how to explain what I saw yesterday? We took our six-month-old daughter to watch the Giants play the Braves at AT&T Park with my mother-in-law and her significant other, and we were surrounded by children. I was one of at least 10 dads I saw wearing an infant carrier. Henry, a four-year-old who kept requesting loudly that Madison Bumgarner strike out whoever was at the plate, was having a grand time in the row in front of us. There was another little boy behind us who couldn’t have been older than 10 months. Both kids seemed to take an interest in our daughter, something my wife relished.

I’ve got plenty of time before I have to worry about snotty little dudes trying to court my daughter, thank goodness. And during that time, I’m guessing we’ll take her to at least a few baseball games every year.

It’s not hard to figure out why families are more likely to bring their young children to professional baseball games than other sporting events. I can’t speak for any other stadiums, but AT&T Park seems like it’s tailored for such outings, with its “first game” certificates, whiffle ball area, Coke slide, etc. It feels like a safe environment for anyone, from babies to seniors. It can get loud, but not TOO loud. Since children can’t be asked to pay close attention to what’s going on for hours at a time without a break, baseball is perfect with the dead time between pitches and innings. That “dead” time is considered a strike against the sport as a TV product, but it certainly makes it easier to stay in touch with what’s going on from a parent’s perspective.

NFL games? Too dangerous, with crowds that are too big and unruly. NBA games? Too loud for an infant, at least at Oracle Arena if the child isn’t wearing ear plugs. NBA and NHL games are probably doable in actuality, except almost all of those games take place at night. I’d have to check out a game at Avaya Stadium myself before I brought the entire family to a Quakes game, and I wouldn’t dream of bringing a baby or a young kid to a soccer/football match if I lived overseas.

Also (and this is important), baseball tickets are usually more affordable than those for other professional sports events.

What does all this mean? For all the hand-wringing about their audience moving into nursing homes and eating dinner at 4:30 pm, MLB has a built-in advantage. The game itself is pretty boring on its surface: a ball is thrown, and either nothing happens or there’s anywhere from two to fifteen seconds of action. Then everyone kind of walks around a little bit and repositions themselves until the ball is thrown again. Baseball fans know that baseball’s allure comes from looking closer, at all of the split-second decisions that must be made on every play, every pitch.

I wouldn’t mind seeing teams use their jumbo hi-def scoreboards to teach the finer points of the game to everyone in the ballpark with cutting-edge animation and graphics, in a way that’ll keep kids entertained while giving them an appreciation for the sport.

Then again, I’ve also attended a ton of games over the years and I’m sick of “Kiss Cam,” Lou Seal kayak races and the (very possibly rigged) game shows that are on the scoreboard every single game. For that matter, how about some highlights from other games? (Alright, I’m probably getting ahead of myself … maybe I’ll tackle between-innings AT&T Park entertainment at some other time.)

“Its TV audience skews older than that of any other major sport, and across the country, the number of kids playing baseball continues a two-decade-long decline,” according to the Washington Post.

Both of those points sound accurate …

1. A regular season baseball game isn’t necessarily a compelling television program unless one has a vested interest in one of the teams on the screen. Why do you think CSN Bay Area focuses so often on kids in the stands? Not only do Kruk and Kuip love to riff on those scenes, but kids expect to be a part of the action instead of being passive observers. The people in the CSNBA truck are the best in the biz, and they know all of this.

2. There are more choices — both on TV and for a kid’s playtime activities. When my father was growing up, baseball was THE sport to play. No one was playing soccer, let alone lacrosse. Tons of kids in California, especially in the East Bay, swim all year long. It’s tough to blame kids (or parents) for trying other sports if baseball doesn’t capture a kid’s attention or seems too difficult.

But it’s hard to get on board with this “baseball is in crisis mode because kids don’t care” line of thinking after seeing nearly as many young children at AT&T Park yesterday as one might see at an amusement park or a zoo. Especially since dozens of them were running the bases after the Giants coughed up a 5-3 lead and lost 7-5. The kids are there. It’s up to MLB to get them hooked early.