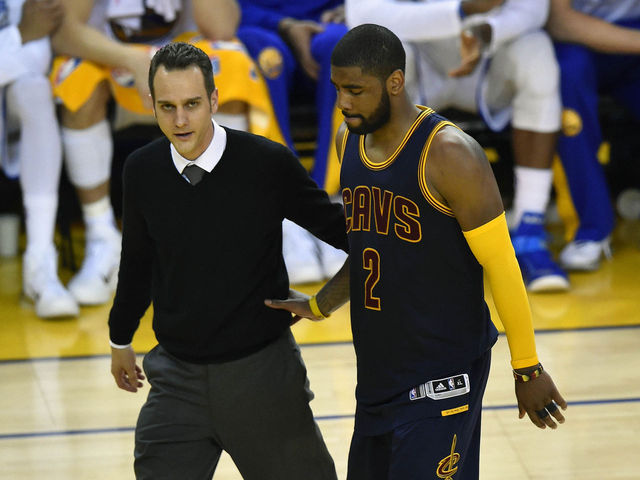 Steve Kerr’s comments last night weren’t all that different from what we hear from coaches and players all the time, but the way he insisted that he was being sincere was striking.

As we all found out today, Kyrie Irving’s season is over due to a fractured kneecap. So the Cavaliers, who won two series without Kevin Love, including a sweep of the Hawks without Irving in Games 2 and 3, are without two-thirds of their “Big Three” the rest of the way. They still have the biggest, baddest and best player out of that group in LeBron James, but it’s hard to imagine how he can do more than he did last night WITH a very effective Irving on the floor with him, and the Warriors still pulled out Game 1 in overtime.

The Warriors were favored by six points going into Game 1, and Bovada has Golden State at -8.5 for Game 2. They were already deeper than the Cavaliers, and Irving did a commendable job guarding Stephen Curry last night. Now it’s up to Matthew Dellavedova to defend either the MVP or Klay Thompson when Iman Shumpert or J.R. Smith aren’t on the floor. Good luck.

No other team has been healthier this season than the Warriors, and many will point out that fact IF they win their first championship in 40 years … as if that takes something away from the feat. This is something I never understand about sports — injuries are seen as at least 90% luck, and the poor, sad teams that get hit with injuries had their rightful place in the league hierarchy snatched away unfairly.

When an ultra-runner (someone who competes in races longer than marathons) wins a race in which several competitors drop out, it actually highlights what the winner accomplished. Simply getting through such a grueling event is part of the challenge. But when we look at a sport like the NBA, the task of getting through 98-110 games almost gets glossed over.

“It’s a marathon, not a sprint” is a cliche for a reason.

That last point is valid, but it’s just a piece of the equation. The Warriors, who were long known for suffering a ridiculous number of injuries every season (to the point where the team’s training techniques and procedures were called into question by outsiders), have put together a team built for the long haul that was managed in a fashion to where they could navigate the season without taxing key players unnecessarily.

Are we right to be (pleasantly) surprised that Andrew Bogut is still healthy? Did getting Festus Ezeli back to full health this season help immensely? Did the Warriors actually get help from an injury, as David Lee’s hamstring strain pushed Draymond Green into the starting lineup and set the table for Green’s breakout season? Could this whole thing have been derailed if Stephen Curry suffered a concussion (or worse) when he fell on his head, neck and arm in Houston?

Anyone who follows the team knows all of these things to be true. But part of winning a championship is figuring out a way to put the better team on the floor often enough during the regular season, and four times out of each seven-game series during the playoffs. The Warriors have done that so far, and they were in a good position to do it one more time against Cleveland before Irving’s injury. Now they’re clearly in a better position, but that doesn’t take away from how they’ve raced through this 2014/15 marathon.