“Daric Barton.” Just saying that name can send some A’s fans into a blind rage. Others may feel sympathy, pity, disdain, etc. But what exactly was his crime? He accepted lots of money to play baseball, something  any one of us would do. So, is it the GM’s fault for paying him or is it the fact that baseball’s talent level is so watered down?

Nick Punto was recently signed by the Diamondbacks. What could possibly be the reason to have a 37-year-old guy who will hit around .200? Is his defense and clubhouse presence really worth a few million dollars? You’re telling me there’s no one down at Triple-A Reno who could be a utility infielder for Arizona? The apparent answer to that is “no.” I’ve nothing against Punto, but it calls into question the entire notion of what a professional athlete really is supposed to be.

The concept is fairly simple. We, as a society, love our sports … but the overwhelming majority of us aren’t especially good at them. Therefore, we will pay our hard-earned cash to watch elite athletes play and compete in those sports. The problem is that there are very few elite baseball players. Even in a game where a 70% failure rate can make you an All-Star, there are plenty of fellows on every MLB team who are substandard. To be cruel, I would say at least 100 players in the big leagues do not belong. But it’s not their fault. It’s a classic case of supply and demand. Being a .200 hitter is a valued commodity, it would appear. Also: catchers who cannot hit, pitchers with ERA’s over 5.00, and managers who have proven to be wholly ineffective. In short, we’re giving our money and attention to vast swaths of abject mediocrity on a daily basis.

You may have read this week that Joe Blanton is making a comeback attempt. That goes for Barry Zito and Mark Mulder (again.) These ex-pitchers have their reasons, be it the competition, the camaraderie, the money, the glory or the attention. In their minds, they have sat in front of their televisions and watched far less talented players reap big contracts. Whether they make it back to the Show or not is unknown, but you know a team or two will definitely take a look at them in the Spring. If they are offered a contract and then perform poorly, should we be mad at them? It’s not their fault that baseball is at its nadir for talent and so some desperate GM will hand them a jersey.

When Mulder was sent to St. Louis after the 2004 season, A’s fans were a bit taken aback, especially since Tim Hudson had just been traded to Atlanta (the latter of which would prove to be a horrendous deal for Oakland). In return from the Cardinals, Billy Beane received pitchers Dan Haren, Kiko Calero and minor league catcher Daric Barton.

I had seen Haren pitch well for St. Louis in the World Series, and Calero was a decent reliever, but a lot of the focus was on the young hitter, Barton. He was the No. 32 prospect in all of baseball, having just hit .313 while leading the Low-A Midwest League in on-base percentage, Beane’s favorite stat. So with a wicked stick and a cast of catchers in front of him (Suzuki, Powell and Brown), Barton was made a first baseman. It looked like a great fit in the beginning. Barton became a good defender at first base despite throwing right-handed. In his MLB debut during the September call-ups in 2007, he hit an encouraging .347 in 18 games with four home runs. He was raking big league pitching at the age of 21. The baseball world seemed to be his oyster. 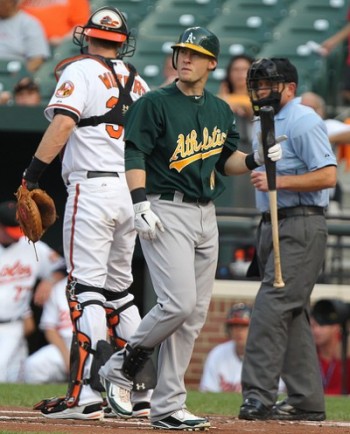 It looked like Barton would be a fixture in the lineup after the 2010 season. He led the AL with 110 walks, hit a respectable .273, and played solid defense. His 10 home runs were low for a corner infielder, but with him constantly getting on base and saving errant Cliff Pennington throws, it was worth it, right? Well, Barton lost touch with the strike zone. He stared at countless strikes that went right down Broadway. The backwards K was his unintended specialty.

In the first walk-off of the A’s magical 2012 season, the Royals’ Jonathan Broxton hit Jonny Gomes with the bases loaded in the 12th inning to send the crowd home happy. But one of the batters before Gomes was Barton, who stared at strike three. It was all going pear-shaped for him and we were still in April. I walked over to his locker in the clubhouse after the game and he was very sincere and candid with me. He told me, “I feel like I’m letting the team down.” I’m sure it was confusing to him how something that was doable at 21 was now such a mystery at 25.

I never boo, but I have no problem with booing. I also have no sympathy for players who complain about being booed. But maybe the next time you feel like a booing a lousy player, you might want to boo the GM who put him between the lines.