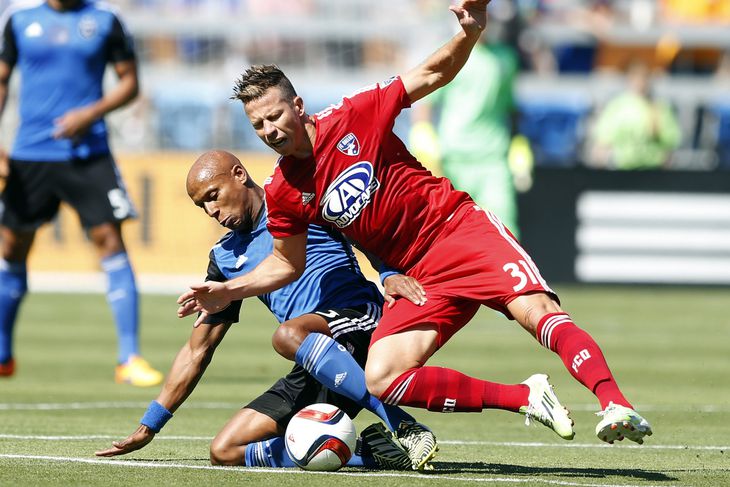 Just as it was on March 7, the last time the San Jose Earthquakes faced FC Dallas, so was it on June 7. That is, a tightly contested match that saw stalwart defense, plenty of missed opportunities from the attack, and a bit of the rough stuff. Fortunately for the Quakes, this time they did not concede a late, game-decisive goal in the waning minutes of extra time. Unfortunately for the Quakes, they had to deal with referee Baldomero Toledo.

A sluggish start from the boys in blue allowed Dallas to attack and establish a rhythm through the first twenty minutes or so. A huge save by David Bingham in the 20th minute marked the time San Jose decided to start playing soccer against their division foe. From that point forward, the Earthquakes mounted attack after attack. Alas, each attack failed to find a finisher able to put the ball on net.

First half highlights included several missed opportunities on both ends, inconsistent calls from the referee, and four yellow cards — including two yellows to FC Dallas players, Michel (foul) and Mauro Diaz (dissent), in the 40th minute.

After the break, the Earthquakes picked up where they left off. Cordell Cato and Matias Perez Garcia created several chances around the box, but like the first half, no one was able to put it on net. Then came the 53rd minute and the beginning of “Baldomero Toledo show.”

“Ball came in on a cross, and he was on the ground,” said forward Mark Sherrod. “I was trying to get out of the way and his head came up to my cleat. I definitely nicked him, but it was one hundred percent incidental. Not a lot I can do about that.”

Sherrod earned a straight red card for what can be described as clumsiness. Replays clearly show Sherrod’s foot making contact with the back of the head of goalkeeper Dan Kennedy. But as Sherrod claimed, the contact made seemed to be in an effort to avoid contact, not to injure the FC Dallas goalkeeper.

During post-game interviews, Toledo claimed that the straight red was for “violent conduct” and “intent.”

Coach Kinnear disagreed, “In my opinion it was not a red card. Mark was actually trying to get out of the way as [Dan] Kennedy was picking up his body. They got tangled up. Should be incidental or accidental…referee saw it differently.”

As did Captain Chris Wondolowski, “I know Mark … he hopped up and he was trying to get out of the way. I did see it. He did catch him a bit. There was no intent.”

Twenty minutes later, Je-Vaughn Watson was given a straight red for a “serious foul.” Replays seem to portray Vaughn going for the ball and catching Cordell Cato on the shin during a slide tackle, although Vaughn’s studs up and in the air. Still it was another quick red that seemed to escalate the tension between Toledo and pretty much everyone at Avaya Stadium.

Ten minutes after that, J.J. Koval was shown a straight red for a “serious foul.” A high slide tackle from Koval seemed most deserved of all three reds.

For context, the world record for red cards given in a single match is five.

“It’s pretty weird,” Wondo said of the three-red match. “Haven’t had many of those. It’s hard to prepare for that and go about [the game]. I don’t even know what formation we ended with. It’s just one of those things — it’s very difficult and I wish it didn’t happen.”

Asked if the Quakes game-plan was in anyway affected by Toledo’s penchant for being quick to draw red cards, Wondo responded, “No, you can’t change the way you play. You know there will always be that. You know you have to be careful; you have to be smart. You can’t put yourself in those situations. I guess, knowing who the referee is, that is on us for putting ourselves in that situation.”

As play settled down and the game drew to a close, the Earthquakes, down to nine men and cognizant of the way the last game between the two clubs ended, seemed content to tie and pick up the point.

Said Dominic Kinnear, “I think if you ask me at halftime if we’ll take a point with the way the game was going, I think we were kind of leaning [towards accepting a point]. As soon as you go down a man obviously you think the odds are stacked against you. Then it evens up. Shea’s set piece, and Wondo header, we were knocking on the door. Even ten on eleven, I thought we were doing some pretty good things. I’m not going to sit back in my chair and smile, but … and I told the guys this, ‘I was really happy with the way you handled yourselves today as far as being down a man. You never got rattled.’ We did okay.”

99 problems, but a goal ain’t one: Wondo, red card lead Quakes to 2-0 win
Meredith, Thompson Come Up Big — Quakes Win on PKs, Advance in US Open Cup
To Top