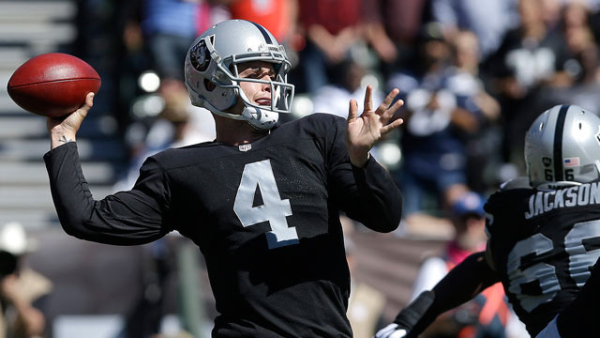 The Oakland Raiders came out of the bye week with a new coach and looked like a new team — one that still could not pull out a win. The offense was more aggressive and the running game … well, there was actually a running game to speak of. The defense is still not playing well, but they didn’t allow the high-powered Chargers offense to run away with things.

The defense is still a major liability, but the offense was actually able to move the ball consistently for the first time all season. The Raiders came out and attacked early, scoring on a 77-yard touchdown pass on the third play of the game. Rookie quarterback Derek Carr had a career-high day with 282 yards and four touchdowns, with his only blemish being an interception on a deep throw as the Raiders were driving with less than two minutes left in the game.

With the Raiders passing game finally working, the running game was finally able to get going. For the first time all season, Raiders running backs were able to put up 100 yards on the ground. The two running backs, Darren McFadden and Maurice Jones Drew, combined for 110 yards and averaged more than six yards per carry. As a result, the team was able to sustain drives and put up twice as many points as they had in any other game this season.

The Raiders had a four-point lead in the fourth quarter before allowing the Chargers to put together a touchdown drive with less than two minutes left in the game. The Raiders got the ball back on their own 20-yard line and drove 35 yards on three plays before Carr threw an ill-advised deep pass that was picked off on the left sideline by Jason Verrett.

The Raiders only needed another 15 yards before they would have been in Sebastian Janikowski’s range and had a shot to tie the game. Then again, the game would already be tied had Janikowski made the 53-yard opportunity he had earlier in the game, something that used to be an automatic for him.

The offense easily had its best game of the year but the rest of the team did not pull their weight. Janikowski let the team down on his only field goal opportunity and the defense let the team down 90% of the time it was on the field. As nice as it is to see the offense actually put points on the board, the team may still never win a game if they can’t improve on defense and special teams.

Can Sparano turn around NFL’s worst offense? Past history says probably not
Denarius Moore getting clean slate with Raiders
To Top
wpDiscuz