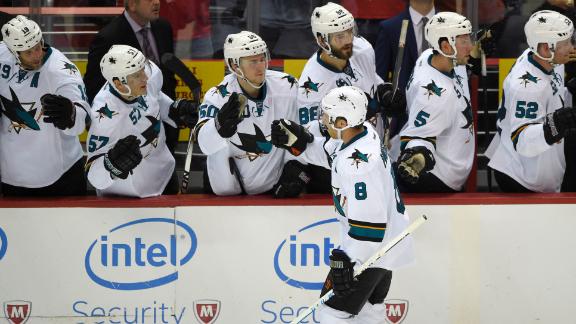 The Sharks road opener was so helter skelter that it’s almost hard to decide what to address first.

Sure, the basic headline is that Team Teal now has a 3-0 record on the young season after a 6-5 shootout win against the Washington Capitals — a team which they faced in the shootout in each of their match-ups last season.

But it doesn’t overshadow the fact that the Sharks lost control of the game twice — showing that the issue of playing a full 60 minutes is still a problem like it has been in season’s past — before Joe Pavelski’s lone goal in the shootout saved the day.

Tuesday’s tilt was a game of firsts: Matt Irwin and John Scott made their season debuts, and both scored their first goals of the 2014-15 campaign. Heck, Irwin scored two goals within the first five minutes of the first period. The first goal came right off the draw at the left faceoff circle, and the second was a rebounder of a shot by Matt Nieto on San Jose’s first power play attempt of the game.

Scott went top shelf to increase San Jose’s lead, got into a scuffle behind Washington’s net immediately after scoring, and chased starting goaltender Braden Holtby out of the game. And if you think you are shocked that Scott scored a goal, his third in 237 career games, you should see the replay of his reaction — trust me, he was just as surprised as you were.

Pavelski also scored his first goal of the season, knocking in his own rebound that ricocheted off both goalie Justin Peters and winger Eric Fehr and across the line in such a peculiar fashion that it deserves just as many replay watches as Scott’s goal.

San Jose also allowed the first goals against of the season, with the shutout streak ending at 142:51. Not a total knock on Antti Niemi, however, who saved 29 of 34 shots, particularly a few tricky ones there at the end of the final frame.

But what made this game an edge-of-your-seat watch, for better or worse, is that the Sharks had two solid leads during the course of the game and managed to allow the Caps to gain momentum and eventually tie the game. San Jose had a 3-0 lead after a vicious opening frame, but by the end of the second stanza Washington had closed the gap to 4-3. Then after Tommy Wingels widened the lead to 5-3 to open the third, the Sharks allowed the home team to come up and knot the match up, giving Alex Ovechkin plenty of room to skate up and wrist the puck past Niemi to close the gap 5-4. Then Troy Brouwer got the jump on Irwin, who lost his footing and couldn’t catch up to stop the Washington winger from knotting the battle at 15:25 in the third frame.

Sure, it’s only the third game of the regular season, but following a strong first stanza with a sloppy second stanza isn’t a foreign concept to the Sharks. Not to mention taking two three-goal leads and not being able to hold either one. Should the Sharks be worried about history repeating itself?

That work and improvement will have to come on this roadie, as the Sharks continue their East Coast tour on Thursday, Oct. 16, against the New York Islanders. Puck drop for that game is scheduled for 4 pm Pacific time.

— Irwin had his first career multi-goal game. He is the first Sharks defenseman to have a two-goal game since Dan Boyle on Jan 30, 2010.

— Scott Hannan became the third Sharks draft pick to play in 1,000 NHL games, (Patrick Marleau and Ray Whitney were the others).

McLellan after Sharks’ second consecutive shutout win: “That was not a well-played game on our behalf.”
Islanders hand Sharks first loss of the season in shootout battle
To Top