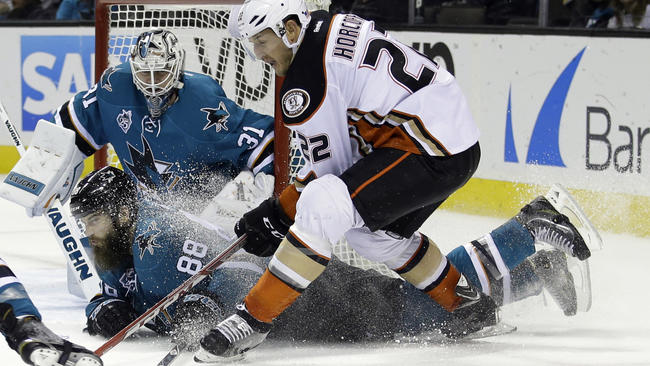 A hard-hitting, tight-checking, low-scoring tilt is to be expected when the Anaheim Ducks come to town. A shutout at the hands of their backup goalie, however, wasn’t what the Sharks had in mind.

All it took was a goal in the first period to solidify the Sharks’ fate. Even when they took over the better part of the game, they never found the back of the net, falling 1-0 to an Anaheim team that is battling to rebound from a dreadful start to the 2015-16 campaign.

The loss puts San Jose at 1-2-0 on the current homestand, and an even 7-7-0 on the season. A common thread in those losses has been Team Teal’s difficulty getting off to a quality start.

They appear able to pick up momentum as games go on — an improvement over last season’s habit of starting off strong and sagging late — yet playing aggressively from the drop of the puck continues to be an issue.

“Our first 10 minutes, for whatever reason, were not very good,” Tommy Wingels said of the start against the Ducks. “We were on our heels and did not push the pace of play. It’s disappointing because (Anaheim) played last night, and there’s no reason they should have been more ready to play than us.”

It was the polar opposite of how San Jose came out on Thursday against the Florida Panthers. They were so slow to start on Saturday that they didn’t put a single shot on goal through the first five minutes of the game. Which left just enough of an opening for Corey Perry to score the lone goal of the game, beating Martin Jones top shelf.

“The first 10 minutes they had the jump on us,” coach Peter DeBoer said with a shrug. “We were standing around watching. I don’t know why.”

… despite how much they rallied afterward

“You have to give Anaheim credit for coming out ready to play,” DeBoer said. “But that was the only time they were the better team tonight.”

San Jose maintained an absolutely relentless pace in the second frame, gaining ground on Anaheim and packing on the pressure.

Joe Pavelski said: “Obviously we wanted a better start, we didn’t get it. But we battled back and gave ourselves an opportunity to score.”

However, Ducks’ backup netminder Anton Khudobin wasn’t budging, making some big saves late to preserve the shutout, even robbing Patrick Marleau of what looked to be a repeat of his stellar goal from Thursday night.

To add to the frustration, Jones was stellar on his side of the ice. After allowing the first goal, he was possessed between the pipes, stringing together a series of highlight reel-worthy saves. He stymied Ryan Kesler’s rebound shot and robbed Chris Stewart before the puck could cross the crease, among other stops.

This isn’t the first time this season that the offense in front of Jones could have given him more help. Surely that was part of the motivation behind picking up the pace so readily after that one goal from Perry. “Our goalie was great,” DeBoer acknowledged. “We just have to stick with it.”

San Jose carried that momentum into the third frame and had a couple good looks but couldn’t get the puck past Khudobin. Not even with Jones pulled late in the third for an extra skater, or with back-to-back opportunities on the power play.

And then there’s the power play

Special teams is a whole other problem, as San Jose has yet to score on the man advantage on home ice this season. “Obviously the power play didn’t click,” DeBoer said. “But it’s not like we’re not establishing possession, getting in, looking dangerous.”

“We’ve got to find it,” Pavelski insisted. “Power play has always been a strong point. It’s in this room. We can get it.”

The Sharks have an extra day to pinpoint whatever is ailing their scoring and keeping them from finding their legs early in games. After an exhaustive stretch of games every other night, San Jose has two game-less days at home before hosting the New York Islanders on Tuesday. You can bet the starts are going to be a heavy topic of conversation over the next couple of days.

“We obviously know we have to be better at that,” DeBoer sighed. “We’ll try and fix that going forward.”

— The Sharks won the face-off battle 38-27, and have won the battle in six of their last seven home contests.