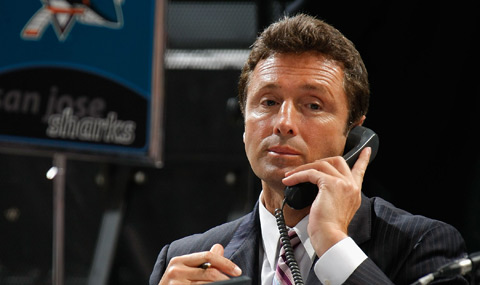 This offseason for the San Jose Sharks has been peppered with talk of “rebuilding” and “giving the younger guys a chance” and a few other overused phrases that I’d rather not take the time and finger movements to type out.

Except the Sharks really haven’t made any real shocking moves over the summer — unless your entire world came to an end when they traded Brad Stuart to Colorado. If anything, the Sharks have retained more players than they’ve released.

More “re-signing” than “revamping,” if you will.

Other than parting ways with Stuart, Dan Boyle and disgruntled forward Marty Havlat, they haven’t made too many waves. Their only big-ticket acquisition came in early July when they inked forward John Scott to a one-year contract. Scott hasn’t even skated in a teal sweater yet and has gotten more negative feedback than the “Into The Storm” trailers have gotten from “Twister” enthusiasts.

This trend was furthered over the last few weeks as SJ has sat quietly. No movement. Nada.

With August now in full swing and camp around the corner, the question still stands: How can a team have a “rebuild” period when there hasn’t been much deconstruction?

One of the last substantial moves the team made was a few weeks ago when they resigned Jason Demers to a two-year deal. Demers is in fact coming off of a bounce-back season. After underperforming during the truncated season, the 26-year-old defenseman played 75 games and registered a career-high 34 points (five goals, 29 assists), a plus-14 rating and 30 penalty minutes in 2013-2014.

He showed hints of leadership “stuff” at home when San Jose hosted the Pittsburgh Penguins and staged a massive come-from-behind 5-3 victory. It proved to be one of the Sharks most physical bouts of the regular season, and while credit was given to Raffi Torres for lighting a fire under the team to turn up the intensity, Demers led the way in hits.

(Granted, he was terrible in the Round 1 of the playoffs. But so was the rest of the team.)

The signing could have more to do with the “identity makeover” that the club needs, and less to do with how the defenseman looks on the stats sheet. But it’s not a move that screams “reconstruction” … or handing the team to the younger set, for that matter.

Tossing the keys to the youngsters would mean, perhaps, bringing up 2013 draftee Mirco Mueller from the AHL Sharks and give him a longer look on NHL ice. With more players staying put on the blue line than leaving SJ — and Brent Burns getting moved back to defense after a season on the top offensive line — the Sharks d-core is looking very full. Let’s not forget the re-signings of some worthy defensemen in Worcester camp, either. Matt Tennyson and Taylor Doherty have impressive AHL records and should get an opportunity to prove themselves worthy of roster spots in San Jose.

Members of the coaching staff and teammates said in late July that they’d like to see Mueller, 19, make the jump. But if he made the opening night roster, it would remain to be seen whether he’d get significant playing time over veteran defensemen down the stretch.

Even if the Sharks rebuild-a-thon is about power shifts to the younger players, that could still be difficult with so many key players from last season’s roster still in San Jose.

Inking netminder Alex Stalock was instrumental, given his stellar 2013-2014 performance and how well the rest of the team played in front of him. One caveat: it appears that Antti Niemi is still in the picture, giving credence to the idea that head coach Todd McLellan could still keep starting the vet between the pipes more often than he should.

There has been plenty of discussion and hesitation over whether or not Stalock has it in him to be a regular starter. But the team will never know unless he gets more time.

***
As far as the offense is concerned: It doesn’t look like Joe Thornton or Patrick Marleau are going anywhere. And if leadership and morale are truly the aspect of this team that the Sharks want to revamp, how does that work with the same veterans on the ice?

Sure, signing young guns Tommy Wingels and James Sheppard over the summer is congruent with rewarding the greener side of the roster. Plus, the team is already naturally trending toward a new set of leaders in Logan Couture, Joe Pavelski and Marc-Edouard Vlasic. Heck, last season’s rookies, Matt Nieto and Tomas Hertl, showed a little leadership swagger during prospect camp, giving hope that one or both of them could be more of a presence in the dressing room.

But unless someone rips the C off Thornton’s chest, it would only make sense for the players to look to him for guidance. Perhaps that’s what the Sharks still want.

It’s not as if the Sharks needed to make all of their roster moves within the month of July. But their silent stance on the trade market and retention of last season’s roster makes an overall team rebuild look less and less likely.