The location of an upcoming game between the San Jose Sharks and Los Angeles Kings, slated to play outdoors, has not been announced quite yet. But thanks to a link on Ticketmaster that appeared on the site for three hours before someone took it down, we probably have our answer. 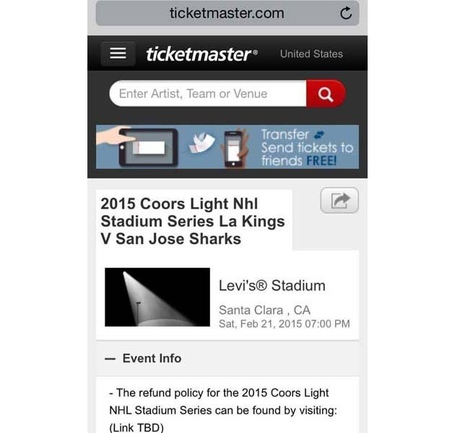 CBS Sports reported that “a source with knowledge of the event” confirmed that the game between these two rivals will occur at Levi’s Stadium on Feb. 21. Tough break for AT&T Park and the Giants. Hopefully Larry Baer and Co. can make do with 81 “sellout” baseball games, multiple concerts and the odd celebrity marriage proposal.

Alright, perhaps Ticketmaster mocked links to outdoor games at Levi’s Stadium and AT&T Park, and some intern accidentally activated the one for Levi’s. (Because if we’ve learned one thing from following the ins and outs of sports media, one must always blame poor, faceless interns whenever anything dumb happens.)

But this region’s first outdoor game is most likely occurring in Santa Clara, and the Ticketmaster link was probably pulled once the VIPs caught wind. VIPs usually like to announce these things with a carefully-crafted release, followed by a press conference that includes a forgettable speech made by a grinning mayor.

The first ever battle between AT&T and Levi’s was held mostly in secret, between two very different facilities on different sides of the Bay Area. And it could’ve gone either way, depending on what the NHL was looking for. If we assume that the NHL (unlike FIFA) decides where to hold their big events based on merit as opposed to outright bribery, both locations had their strong points.

Outdoor game + the home of the Giants = blimp cam gold.

The sight of a hockey rink less than a hundred yards away from McCovey Cove would’ve been surreal, and shots of the ice with the San Francisco skyline in the background made AT&T the obvious choice for television purposes.

Another idea I’d heard bounced around was a little harder to prove. Apparently playing one game in San Francisco would’ve exposed the Sharks to a new group of fans who … ignored the Sharks because their home ice is located an hour south? Seems like a stretch to me, but for all I know the Sharks and Warriors could end up playing at the same arena in Mission Bay before 2020. I’m not sure how much the NHL cares either way about how many Sharks fans exist outside the 408, as long as they sell out their home games, but their meager local TV deal has been a topic of conversation lately and all this stuff is intertwined.

Most people I talked to about the NHL’s upcoming decision thought AT&T Park was a slam dunk, but I just didn’t see it. Levi’s was always the favorite, despite AT&T’s inherent beauty and supposed cool factor.

That new stadium smell: Levi’s, which held its first event on Saturday, is in the midst of a honeymoon period that’ll probably last about a year. That is, unless parking and traffic turn out to be a complete nightmare. But if you’re an NHL head honcho touring both facilities, there’s something exciting about wandering around a new building and imagining what it’d be like to stage an event before the place is a year old.

Sight lines: Levi’s has a smaller playing surface than AT&T (duh), and the shape of the field is perfectly suited for hockey — compared to a baseball field, anyway. Even though Levi’s is clearly a bigger facility in general, the setup gives the impression that fans are right on top of the action, even in the third deck. In contrast, I attended the most recent Fight Hunger Bowl at AT&T, and the centerfield and arcade areas were really far away from the action.

Weather: The last thing the Sharks want is a rainy outdoor classic. While the difference isn’t all that severe, San Francisco gets almost 20% more rainfall than Santa Clara in an average February and over 25% more annually.

Capacity: Levi’s Stadium seats 68,500 and contains 165 luxury suites, compared to about 40,000 seats (depending on configuration) and 68 luxury suites at AT&T Park. If Levi’s was indeed the choice, tickets/suites (gate revenue) was probably the deciding factor. That’s why it makes sense that Ticketmaster spilled the beans, because only twice has the attendance for an NHL game surpassed 68,500, and there’s no better time than now to take advantage of the area’s fascination with the 49ers’ new home.