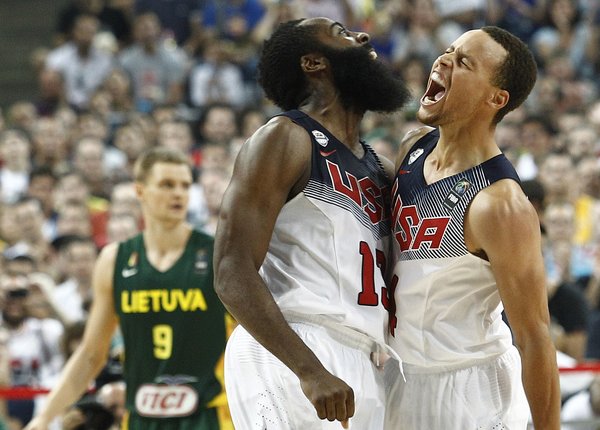 The Warriors went undefeated over the past week (well duh, they’re riding a nine-game winning streak) and Stephen Curry averaged 30.0 points and 8.0 assists per game. So it was probably a no-brainer to award Curry with his second Western Conference Player of the Week honor this season.

And according to the online sports books, Curry is the favorite to claim his first NBA Most Valuable Player award after this season. Based on what the oddsmakers are thinking, Curry is clearly in the lead with James Harden in second, Russell Westbrook a little behind in third, and LeBron James becoming a long shot.

It looks like Harden is solidly in second place a little over a week later, but the Houston Rockets are in denial. (Has any franchise or GM campaigned harder for a player to be named MVP than the Rockets and Daryl Morey?)

For those who say, “Forget the odds, what do you think?” Here’s what I think:

As we all agreed on our latest BASGcast with Ethan Sherwood Strauss, it’s not even close. Curry has the highest plus/minus and highest real plus/minus in the league, and he’s by far the best player on the best team of the 2014-15 season. The Warriors actually get outscored when Curry is off the floor. So he doesn’t score 40+ points as often or play as many minutes — who cares, he doesn’t need to. He’s also a better defender than Harden (just don’t tell the Rockets or they’ll start squawking).

The Warriors are also the favorite to win the NBA title … among teams out of the Western Conference. Every sports book I’ve seen lists the Cavaliers as the overall favorite, with the Warriors close behind. Many have Cleveland at 11/4, followed by Golden State at 3/1, San Antonio at 6/1, and Atlanta at 7/1. A lot of people think the Cavs will have a much easier road coming out of the Eastern Conference, plus that whole LeBron James thing.