The July 31st Major League Baseball trade deadline is fast approaching, and, for the first time in a long time, the A’s are in a position to get a player to help them win now rather than a package of players for later.

Say what you will about the hot streak the A’s are on, but it’s a fact that there are believers on this team, in the front office, and in the stands. So, rather than A’s fans nervously waiting to see if the next star is heading out of Oakland, A’s fans can now anxiously wait to see if the A’s brass will bring in someone to help the team now.

What do the A’s have to deal?

As usual, the A’s have quite a few pitchers that could be potential trade targets. After what the A’s rookie pitchers did to the Yankees, it’s not surprising that teams would be interested in acquiring some of them. But if Oakland is not comfortable with its returning pitchers (Brett Anderson, Dallas Braden, and Brandon McCarthy), then it’s likely none of the current big leaguers will be dealt. Although, when those three guys do come back, someone will lose out on a starting role. Whether that will happen now or later is up to Billy Beane and the rest of the A’s front office.

Down on the farm, Oakland has pretty good stock. The Baseball America top ten prospects for Oakland includes five pitchers, four outfielders, and one catcher (Derek Norris). Two of the pitchers are already contributing in the majors (Jarrod Parker and Tommy Milone), but the others are still pitching in the minors. 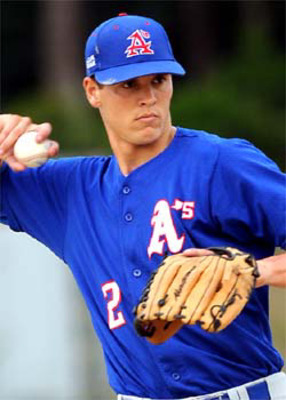 When it comes down to picking out prospects other teams will want, it really depends on the scouting director. But if a big trade is going to happen, it’s highly likely the A’s would have to include a top-level pitcher like Brad Peacock or A.J. Cole.

On the offensive side, Grant Green probably has the most value. Green is an interesting case. He began his career as a shortstop and moved to the outfield recently. He’s probably the best all-around player in the system, but Michael Choice is right there with him. Either way, these two guys have potential to do well in the future for the A’s, so Oakland should not trade them lightly.

In the long run, it would be better for Oakland to deal pitching to get a player because their depth is far greater at pitcher than it is anywhere else.

What do the A’s need?

The most glaring needs for Oakland are at shortstop and first base.

Cliff Pennington hitting the disabled list hurts. He’s not a killer hitter himself, but Eric Sogard and Brandon Hicks are not near as strong on defense and are not great hitters themselves. An upgrade here would certainly help the offense.

Brandon Moss has played a first, but he is not strong defensively at all as a converted outfielder. His bat is average (.248. 11 HR), but Chris Carter could be the answer at first.

In 13 games so far, Carter is hitting .297 with five home runs. He’s not much stronger at first, but he has always been a powerful hitter in the minors. If this is the year Carter puts it together, a first baseman may not be as big of a need in Oakland as it was a few months ago.

Who will they go after?

Justin Upton is well out of reach for the A’s, and probably wouldn’t be a good idea anyway due to the already crowded outfield and obvious financial restraints. But the A’s are in the realistic hunt for Chase Headley and were in talks for Hanley Ramirez until the Dodgers picked him up last night.

The asking price for Headley is high, and the A’s are not willing to part with a lot of high-end prospects. However, the Padres and A’s have done business before (seemingly every season, actually). But the A’s seem to be content with Brandon Inge right now. Headley would be for future years as well as this season, were the A’s to make a deal for him.

Stephen Drew is another possibility as the Diamondbacks are starting to rebuild. He is just coming off the disabled list, so his production is in question. But, if healthy, he could provide a bat at shortstop and be around for years to come, which is appealing to the franchise (and its fans) for obvious reasons.

When all is said and done, it’s unlikely the A’s will be able to secure a big bat.

Even with all the pitching in the organization, teams are going to want top-end prospects for players like Headley. There are other teams out there that appear to be more desperate, according to my perusing of MLB Trade Rumors, who are likely to offer a better package than the A’s.

As it turns out, the A’s turned down a deal that would have the Marlins eat half of Ramirez’s contract, and the A’s would only give up a couple minor leaguers. But the A’s did not make the deal due to concerns about Ramirez’s hand injury, so the Dodgers were able to swoop in.

Nonetheless, a player like Drew could be a real possibility, but it’s unclear how much help a bat like his would really provide.

And, if you believe in this sort of thing, the A’s players and coaches have been adamant about how great their clubhouse chemistry is. If that is what’s driving this team right now, maybe it would be better to leave it unchanged.