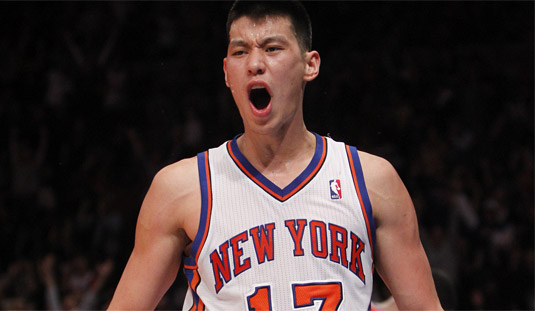 Linsanity may be over, but point guard Jeremy Lin is still garnering offers from teams this offseason.

According to ESPN’s Chris Broussard, Lin is meeting with the Houston Rockets to discuss signing as a free agent. Lin is currently a restricted free agent, so the New York Knicks would have the opportunity to match any offer he is given. However, the Knicks are in a tough spot because of the luxury tax and are afraid that signing Lin may push their books to an uncomfortable financial level. New York could offer Lin a pretty hefty contract of four years and $24.5 million, but other teams could go as high as four years and $40 million, which is a figure that Knicks could not afford.

Although Lin has not expressed interest in returning to his former team, the Warriors are his local club. A native of Palo Alto, CA, Lin was cut by the Warriors before emerging as a star in New York. Last season, he finished the year averaging 14.6 points per game and 6.2 assists per game, but those numbers were much, much higher in his first ten games in the starting lineup.

Linsanity simmered after a few weeks, but Lin did prove that he can be a legitimate point guard in the NBA. However, teams are still not sold on him, especially the Knicks.

Broussard also points out that the Knicks have said they will let the market dictate Lin’s value, which is a smart move considering teams (and fans) still don’t know what to make of him.

The Warriors could not afford to give Lin a $40 million deal (or even a $24.5 million deal, for that matter), but they may be able to find a way to offer him something after moving players around, as they are expected to do.

Nate Robsinson, a big contributor at point guard late in the season, is an unrestricted free agent and it is unlikely he will return. As a result, the Warriors do not have a point guard behind Stephen Curry (who isn’t much of a point guard himself, really) and Charles Jenkins. Jenkins is not guaranteed a contract next season, but the Warriors have expressed interest in keeping him. Still, someone will need to play point guard, especially with Curry’s constant injury concerns.

On the other hand, the Warriors have an abundance of small forwards, so players of that position will likely be traded. Richard Jefferson has a very rich contract (over $10 million for the next two years each), but it is unlikely that he will be moved for that very reason. Dorell Wright is the name most people think the Warriors will move due to his reasonable contract and his falling out of favor with head coach Mark Jackson.

But even if the Warriors could move players around and get finances together to offer Lin a contract, would a) the Warriors benefit from it b) Lin want to sign with Golden State and c) the fans want to see Lin return.

a) Lin did not succeed with the Warriors before, so it’s unclear (as it always is) if he would succeed in Golden State now. When Linsanity captivated the NBA, a lot of fans chimed in saying that Lin just needed the opportunity to play for the Warriors, which he never got.

That may be true, but something to note is that Lin turned the ball over 126 times last season. His turnover-assist ratio was .583, so for every two assists Lin turned the ball over once. Nate Robinson, in comparison, will get way less money on the market, but his turnover-assist ratio was .325 last year. For a point guard, turnovers and assists may be the two most important statistics, so by this analysis Robinson would be a better choice than Lin, and that doesn’t even take financials into account.

b) Little is known of Lin’s feelings towards the Warriors, but simple intuition would seem to be that unless he wants to play for his hometown team, he doesn’t owe the Warriors anything. They cut him and let him go, and he went on and proved them wrong. End of story.

c) This is where it gets tricky. The Warriors are notorious for letting go of players, via waivers, free agency, or trade, who then go on to have great careers. Wilt Chamberlain, a draft pick that was used on Kevin McHale, Chris Webber, Gilbert Arenas, Vince Carter, the list goes on and on. It’s tough when the franchise you root for lets go of players who become great.

Jeremy Lin, many people thought last season during the Knicks’ win streak, was going to be the latest addition to that list. But the jury is still out on whether or not Lin can be a starter for any team in the NBA after he cooled off as the season progressed. It would be another tough one to stomach if Lin was successful with the Knicks, Rockets or some other team after leaving the Warriors. On the other hand, if Lin comes back to Golden State and is miserable, that may hurt even more.

What do you all think? Should the Warriors even reach out to Lin? Is it worth it? Could they get him at a discount since it’s his local team? All good questions. Let us know in the comments section.